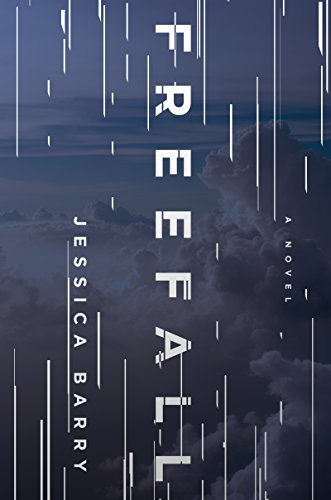 "a gut-wrenching suspense thriller in which both the mother and daughter's only thoughts are to endure, reunite, and make amends while taking the reader on a heartrending journey of trepidation and nail-biting apprehension."

Hold on to your hats. Freefall is sure to take one on the ride of a lifetime. Allison Carpenter, who fled her quiet life in Maine, went to work for Faces magazine in California. Back home her beloved father succumbed to cancer that had been eating away at him. Grief-stricken and estranged from her mother, Allie hoped to carve out a new and separate life in California.

Now, two years after her dad's passing, Jim Quinn, a friend, and the local police chief visits Maggie, Allison's mom. The anguish etched on his face alerts her something is terribly wrong. He imparts the words no parent wants to hear:

"Sit down," he said, gently, though he pressed me down into the chair before taking a seat across from me. "Maggie, there's been an accident."

Horrified, Jim relays the details of the private plane in which Allison was a passenger, crashed and went down somewhere in the Rockies with no apparent survivors. The pilot, Allison's fiancé Ben Gardner, was discovered at the controls, but Allison's body hasn't been recovered.

This makes Maggie believe her daughter did not perish. Maggie knows Allison to be a strong woman. If her body isn't found, there is hope, though Jim denies the possibility due to the severity of the crash.

Maggie is surprised to hear of Allison's engagement. Guilt gnaws at her as she wishes she made a better attempt to stay close to her only child.

Allison is alive and scrambling out of the aircraft fearful it will blow up any second. She rummages in her suitcases pitching her formal clothes to snatch up garments fit for the wilderness. Her phone is shattered so she cannot call for help, and she hastily grabs provisions not knowing how long she will be stranded. Her main consideration is to run.

The harrowing trek through the mountains is enough to test even the best of those familiar with rugged terrain:

"I've been climbing for hours now. Palms scraped, knees bloodied, lungs screaming, back aching. But now I'm at the summit. The top of the world, if the world didn't seem so far away.

"The land stretches out like a ragged carpet. The descent is steep and treacherous, but I can see the faint outline of a trail snaking down the side of the mountain. If I take it, I'll have to be careful not to get turned around. If I don't take it, I'll increase my chances of falling down a crevice and splitting open my skull."

Hours turn into days as Allison ventures the perilous mountainside. Pain throbs throughout her body as she plugs on. If found, she realizes she's as good as dead. She mourns the loss of her dad as well as the estrangement with her mother. She must continue on. She needs to see her mother and make things right.

Back in Maine, Maggie is unwavering in her quest to learn all she can about the crash as well as Allison's recent life. Learning the magazine closed down two years ago, she phones Allison's roommate, Tara who states that Allison moved out a year and a half prior and they lost touch. Tara also discloses Allison had been working as a cocktail waitress—this information causes Maggie great confusion. Allison is a college graduate, why would she work as a waitress?

Maggie flies to San Diego for more answers. A trip to Ben's parents' residence doesn't help upon learning the older Gardners are away, so she pretends she is a realtor to check out Ben's house. In her search she discovers Allison's belongings are removed.

As Maggie digs deeper into her daughter's past few years, she becomes more anxious, realizing she doesn't know anything about Allison, but she's determined to find out. As long as her body isn't located, Maggie will hunt for her until she finds her dead or alive.

Maggie's next attempts are to gain information on Ben. She reads he had been the CEO of a pharmaceutical company that created a miracle drug for post-partum depression, which made Ben extremely wealthy.

Freefall is written in the alternating voices of Allison and Maggie as they suffer physical and emotional anguish. This is a gut-wrenching suspense thriller in which both the mother and daughter's only thoughts are to endure, reunite, and make amends while taking the reader on a heartrending journey of trepidation and nail-biting apprehension.