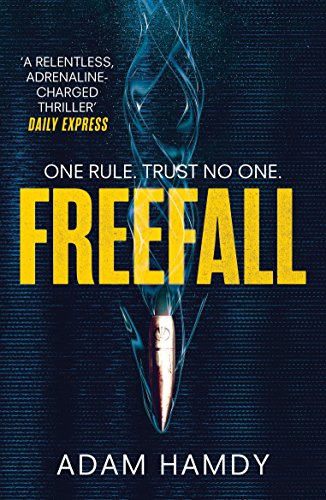 Five hundred sixty pages of nonstop action, plot twists, suspense, and surprises make this second book in the Pendulum Trilogy even more fun than the first in the series. With one more book to go in the proposed trilogy, one can hardly wait to see how the third installment can exceed the first two for excitement and suspense.

After confronting the Pendulum Killer and witnessing his death, John Wallace is in the mountains of Afghanistan photographing the struggles of the obscure Kom tribe’s against both the Taliban and the government in Kabul. Wallace sees his act as one of expiation for the deaths he believes he is responsible for during the hunt for the Pendulum killer. His friends, FBI Agent Christine Ash and London cop Patrick Bailey believe he is seeking his own death.

Whatever the truth of Wallace’s stay in Afghanistan, he is off-grid. In theory no one should know how to find him. That theory proves false the night a squad of the Afghan Army attacks the Kom village where he is currently living, an attack specifically targeting him.

After capturing the leader of the Afghan Army unit, Wallace and Kom headman Vosuruk take him to Kabul to trap the man who ordered the hit. Wallace and Vosuruk are ambushed by a man in a Pendulum mask and armor. Wallace kills him. But he still doesn’t understand why any followers of the dead serial killer are seeking to kill him—unless it’s for revenge.

In London, Wallace’s friend, and one of only two people he trusts, is drawn into the apparent suicide—but more likely murder—of a reporter. But Patrick Bailey is not the cop he was. “Physically, the bullets were long gone, and scars covered the places where they’d torn into his body, but their psychological damage haunted him . . . His life was smaller, darker, and Bailey felt vulnerable, fearful—mortal.”

Bailey’s part in the hunt for Pendulum has nearly killed him, and his current panic attacks are symptoms of PTSD, a diagnosis he resists. As a consequence, Bailey drinks—a lot. Alcohol doesn’t daze him so much that he doesn’t recognize the numbers on a note the reporter left behind as a code of some sort.

FBI Agent Christine Ash struggles with her frustrations. The Bureau refuses to believe that she witnessed a second man meeting with the Pendulum the night he died. The FBI resists her belief that Pendulum had an accomplice, maybe several, so Christine must carry out her own investigation without the availability of Bureau resources.

Wallace is accused of being a terrorist by Interpol, and is arrested in London. Bailey knows his friend has been set up by the Pendulum conspiracy, which is more widespread and more powerful than Wallace, Bailey, or Christine anticipate.

Bailey helps Wallace escape, which means Bailey is arrested by his own colleagues and sent to a maximum prison to be held until his trial. That night he is abducted by Pendulum followers and tortured.

With the help of Salamander, a mob boss with his fingers in a number of unsavory pies, but who is a boyhood friend of Bailey’s, Wallace flies to the United States, where he meets with Christine. Together they track down the parents of the Pendulum follower Wallace killed in Kabul.

The Pendulum conspirators once more demonstrate their influence and wide reach. Christine interviews the Kabul victim’s parents while Wallace waits for her. She is arrested by the local police, turned over to an FBI agent supposedly sent to rescue, but nothing is what it seems in this deceitful world the three friends find themselves living in.

Bailey escapes his torturers and seeks refuge with Salamander, but even the mob boss and his closest and most trustworthy “associates” can be fooled by those involved in the Pendulum conspiracy, whatever it is. The body count rises as Bailey, Salamander, and his gang battle the London members of the conspiracy. The followers in their Pendulum masks and body armor seem to multiply faster than the three friends can take them down.

The plot of Freefall is convoluted, nothing or anyone is what or who one first assumes. There is hardly time to take a breath between action scenes, and Hamdy does not hesitate to not only put his characters in jeopardy, but also fails to rescue them—in a literary sense—before all experience serious damage, none more than Christine.

Indeed, Christine is so badly damaged that she is almost unrecognizable in a psychological sense, although like a psychopath, she hides her personality transformation from everyone but Wallace and Bailey. Whether or how Christine will heal psychologically is a matter for the third book in the trilogy, a wait many readers might not like.

Hamdy is a bit heavy-handed with the guilt felt by Wallace and Bailey. Wallace’s angst spills over into self-pity too often. Also, there is the question as to why he is such a target. Is it primarily revenge or revenge plus another reason?

Despite these reservations Freefall is a far, far above average thriller, and the third book in the trilogy will be as eagerly awaited by fans as Santa Claus is by a six year old.