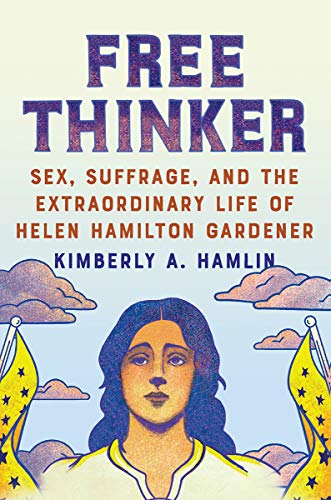 “a well-researched, interesting and enjoyable biography of someone who really should be in the pantheon of feminist heroes . . .”

When it comes to early feminists and female suffragists, the names that come quickly to mind most likely are those of Susan B. Anthony and Elizabeth Cady Stanton, among others. Even Carrie Nation, with her temperance crusade against the evils of strong drink, has gotten more press than the subject of the biography under consideration here.

Helen Hamilton Gardener was one of the most prominent activists of her day, yet she is largely forgotten now. That is rather surprising given her stance on such subjects as “fallen women,” the sexual double standard between men and women, divorce, marital rape and sexual age of consent reform, not to mention her influence and work on behalf of the passage of the Nineteenth Amendment providing (white) women with the universal right to vote in local, state, and national elections.

As it turns out, she did have one notable failure: Not only as a matter of expediency but also one of racism, she failed to make any effort toward including women of color to make enfranchisement a literally universal female right. In short, she could not bring herself to consider the possibility that African American women were just as deserving of full civil rights. It took another 45 years for that to happen.

Born Alice Chenoweth in 1853 in Virginia, something of which she was always proud to point out in later years as well as her family's opposition to slavery, she spent virtually no time living there and experienced a hardscrabble childhood in multiple states in the Midwest even as her brothers suffered their own physical and psychological scars from serving the Union in the Civil War.

The war, however, did open up opportunities for women, particularly in the fields of nursing and teaching, the latter of which appealed to the young Alice. Her proficiency in the field of education ultimately resulted in her becoming the youngest school principal in Ohio. That, unfortunately, led to her undoing.

The married state superintendent of schools took a liking to her, and soon the rumors of indiscretion started to fly. Her “scandalous” behavior caused her to resign her position and led to society's disapproval and condemnation regarding “fallen women” and the rather self-evident hypocrisy of chastity for women but not for men.

Moving to New York City, she changed her name to Helen Hamilton Gardener to avoid her past although she continued to live with her paramour and kept up the impression that he was her husband despite any lack of documentation that that was the case. Living in the city also provided her with a platform from which she started her activist career.

In the event, she needed an income and, as a writer of articles, short stories, and fictional novels, could use many of her plot lines and themes to expound on taboo subjects such as raising the age of female sexual consent, reforming property and divorce laws to benefit women, and giving women more opportunities to rise up from poverty in order to combat the ultimate degradation of prostitution.

Her writing celebrity naturally helped her transition into the fight for the vote. With multiple organizations working at cross-purposes, it was no wonder that it took a decades’-long fight to secure the franchise.

As the fight wore on, Gardener's “husband” died, and she re-married legitimately and moved to Washington, D.C., the epicenter of the battle, where she became not only a society favorite but also managed to insinuate herself into the White House as an adviser and confidante of sorts to President Woodrow Wilson, another Virginia expatriate, in the fight to ratify the Nineteenth Amendment.

Following ratification, Gardener, by virtue of her personality, celebrity, and political acumen then found herself as the highest ranking woman in the federal government, at the time, as a member of the Civil Service Commission which finally provided her with a regular paycheck until she passed away in 1925.

With numerous illustrations and traditional footnotes, this is a well-researched, interesting and enjoyable biography of someone who really should be in the pantheon of feminist heroes; it was actually quite quick and easy to read.

Considering the constant search for positive role models of the feminine variety, this could easily be required reading in upper levels of education just as much for the public in general.