A Free State: A Novel 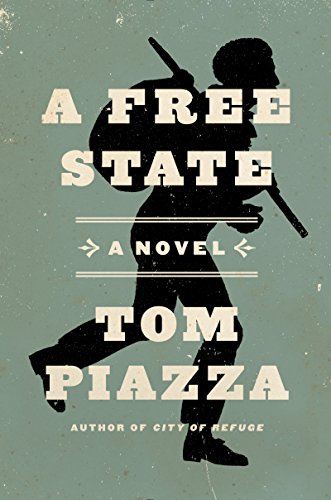 This novel is as finely tuned as the best banjo played by 19-year-old runaway slave Henry Sims. Arriving in Philadelphia in 1855, Henry sets up on street corners dancing and playing his banjo to earn music while being a free man. It isn’t long until James Douglass, manager of a popular minstrel troupe, catches Henry’s acts and determines to find out who he is.

Tom Piazza packs a punch in A Free State, setting the stage for the Civil War and freedom. Douglass is concerned about the boost Henry will give his foundering troupe and has to figure out a way to get him on stage in a day and age when only white men could perform. The irony is rife with the black man pretending to be white pretending to be black to perform songs of slavery before groups of people ambivalent or racist (or in sympathy) about slavery.

James, like Henry, is a runaway, though no one is searching for him now, and he has the safety of his whiteness, despite his Irish heritage (the racism doesn’t end at a line between black and white). He ran away from his abusive brothers to join the circus, where he eventually learned the banjo and soon became master of his own fate, just as Henry looks to do.

For readers who know little about minstrels or minstrelsy, the history is explained in splendid detail in the opening scenes, setting the stage for the story as James, one of the narrators (the other two narrators are Henry and Tull Burton, the slave hunter), passionately describes what he sees in in Henry Sims’ playing and dancing. Also explored are the famous (historical) troupes such as The Virginia Minstrels and what made them beloved and entertaining, as well as where the music came from, the instruments, the songs, the costumes, and more.

James soon runs into slave hunter Tull Burton, who has a penchant for quick and brutal violence. He has been relentlessly tracking Henry and is hell-bent on taking him back to Virginia. Only then does James realize his own naiveté and foolishness—he has been playing with Henry’s life and freedom for profit without really recognizing what it means to the young man. Now it is up to James and the rest of the troupe to try and hide the musical prodigy, who they have been passing off as Mexican, which has its own race issues.

Author Piazza is a modern Mark Twain, from the verisimilitude in speech patterns, unafraid of using the language of the day, of painting a picture of the South as well as the Northern states, making the 19th century come alive on the page in tightly woven prose. He also deftly handles the moral questions without browbeating readers about the obvious. This isn’t just a freedom of an individual, of races, but of genders as well, as embodied by Rose, and can be seen by her lack of voice.

He writes a thoughtfully crafted novel that readers will have a difficult time putting down. Fans of Piazza’s previous novel City of Refuge won’t want to miss this one.