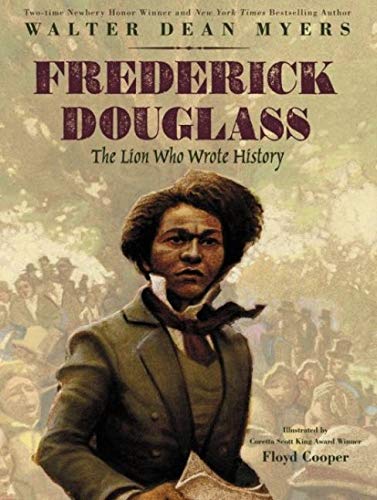 The new picture book by the late Walter Dean Myers called Frederick Douglass: The Lion Who Wrote History is more than the simple story of a slave’s life and how events and people dictated his future; rather, it is the story of what this slave decided to do about various aspects of his life, and how these decisions affected everyone and everything around him.

When the mistress of the plantation is forbidden to teach Frederick to read because these lessons will make him unfit to be a slave, Frederick quickly associates reading with freedom and decides to continue his education, despite the fact that it is against the law. When the “Negro breaker” tries to beat him into submission, Frederick decides to fight back—even though fighting back could mean torture or death. And, rather than making himself content with his lot as an enslaved worker, Frederick dons the clothing of a free black sailor and rides a train to freedom.

Other important decisions include the decision to speak at various abolitionists meetings, even if it meant being spotted by slave catchers; speaking up for the rights of women while he spoke for the rights of slaves; and urging President Lincoln to enlist black soldiers as equal in the Union Army.

This is an important picture book about how what may seem like everyday decisions can have humongous consequences. There is an old African proverb that states: “Until the lion learns how to write, every story will glorify the hunter.” This book shows that the lion—Frederick Douglass—decided to learn to do just that; to read and write so that he could tell his own true story.

The book is rather wordy for a picture book, but there’s no question the great Walter Dean Myers was able to pull it off with passion, dignity, and eloquence. Artist Floyd Cooper’s illustrations are grand, heartwarming, and full of courage and conviction. His depiction of the handsome and serious-faced Douglass is spot on, especially the opening headshot and undeniably intense painting of a young Douglass securing the whip from the Negro breaker’s hand and daring him to strike him again.

Use this book as a lesson about courage, decision-making, and the rise of the African American’s citizenship status.