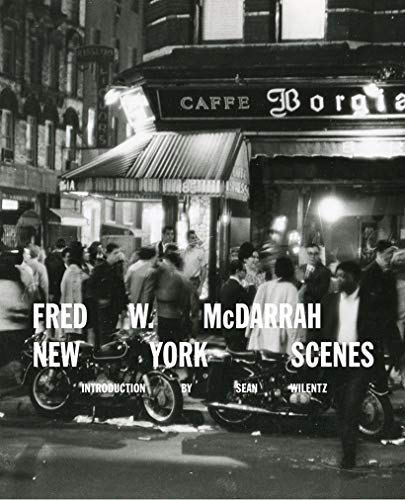 “The people and events that are documented by McDarrah are legendary and huge, and taken together as a body of work create an extraordinary visual record of this vital moment in New York and American history.”

New York has been described as a timeless city of multiple dimensions, parallel realities, and perpendicular views. The Queen City has been photographed by a veritable list of who’s who in photography’s history, all interpreting the city through his or her particular lens.

Photographer Fred W. McDarrah was a photojournalist of a particular time in New York. As the only photographer for the Village Voice for 50 years, he captured a record of people, movements, happenings, everyday gatherings, and the energy of Greenwich Village. His images from the 1950s to the mid 1970s create a body of work that records a time when the Village was in the forefront of the bohemian and counterculture movements that greatly influenced the nation.

Fred W. McDarrah: New York Scenes collects 270 of a quarter million photographs taken over five decades. Together these images chronicle the “kinetics and the camaraderie” in the Village and include photographs of epic events and people such as Allan Ginsburg, Diane Arbus, Jack Kerouac, Bob Dylan, Franz Kline, and Frank O’Hara. His work represents the Beat literary scene, a history of pop artists, the evolution of the counterculture of the sixties, and a documentation of political movements such as Stonewall and the gay rights movement, and the Vietnam war resistance.

The volume, an oversized hardcover with glossy pages, accompanied an exhibition that opened at the Steven Kasher Gallery in Chelsea on September 20, 2018. A well-done essay by Sean Wilentz defines the unique importance of the era and McDarrah’s work. The estate of McDarrah provides a more personal chronology of his professional life to accompany the academic essay.

Fred W. McDarrah: New York Scenes is an important contribution to both the photography and the history of New York. While many photographers have chosen NY as a city to photograph, few have been able to not only photograph on the street but at the same time tell a story of a particular moment so completely. The people and events that are documented by McDarrah are legendary and huge, and taken together as a body of work create an extraordinary visual record of this vital moment in New York and American history. It is an important book for any photographer, photojournalist, historian, New Yorker, or anyone who lived during those times.