Freak to Chic: "Gay" Men in and out of Fashion after Oscar Wilde 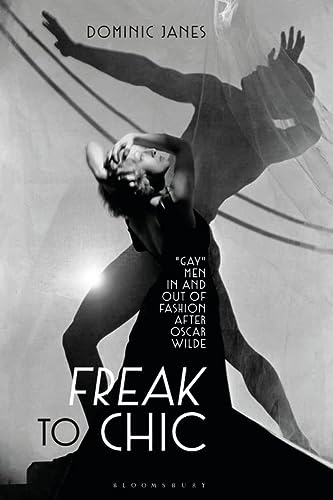 Dominic Janes takes on a number of topics in this wide-ranging book, Freak to Chic. His subtitle promises a focus on gay men, but his overall topic is really the ways in which queerness—gender ambiguity as well as homosexuality—became fashionable for a brief period after World War II.

In the process, he explores how “queer” in the sense of freakish morphed into meaning sexual ambiguity and homosexual. Why were some fashionable people fascinated with freakishness? Janes also uses fashion photographer and designer Cecil Beaton as an example of how gay men shaped an era’s sense of what is fashionable despite the legal and social restrictions on gay men. In the 1920s, one could be queer and chic. The closet allowed a certain amount of freedom in the performance of gender. Janes sees the “freakish” behavior of the past as the closeted beginnings of the current queer celebration of the marginal.

The quotation marks around “gay” in Janes’ title are a manifestation of his awareness of the multiple meanings of words in a particular period. In the 1920s, gay meant happy. Yet from the vantage point of the 21st century, we see some of the men he discusses as gay in the sense of homosexual. Was that meaning circulating back then? Janes is always fascinated with the way words add meanings for a sexual minority. How did “pervert” morph from meaning one who left the Catholic church to a sexual criminal?

Freak to Chic is comprised of chapters that move from discussion of freaks and freak shows to the moment when “queer” became more dangerously connected to homosexual and became less socially accepted. The chapter on freaks and freak shows argues that various kinds of freaks on display—bearded ladies and strong men—are relevant to a discussion of gender transgression. Freaks displayed bodies that in some way confounded or exaggerated prevailing ideas of gender. Eventually, masculine women or effeminate men came to be called freaks. By the 1930s, homosexuals in particular were labeled as freaks, displaying their aberration through their clothing and demeanor.

The second chapter treats the way in which celebrated queer fashion designers and illustrators set trends that challenges traditional ways of displaying the feminine body. Janes discusses the rise of fashion magazines and the influential gay fashion designers and illustrators who were trendsetters in the decade after the war. Fashion magazines like Vogue and Vanity Fair presented clothing as a means of self-fashioning. Women’s clothing would become considered by some traditionalists as dangerously masculine while masculine attire seemed feminized.

After a discussion of the politics of cross-dressing in the early 20th century, Janes discusses the “bright young things” of the 1920, celebrities and socialites: “fast young men, ‘ditzy’ flappers and manly young women” who transgressed norms of gender-appropriate appearance. Homosexuals and bisexuals were included in this group as long as they were amusing. Cecil Beaton became a designer and photographer of men and women in androgynous or flamboyant attire.

Chapter 5 focuses on the new diva worship and the ascendance of camp. Women embraced the cult of glamour, often designed by gay men, as empowering. Those in the know understood that gender is performative and were happy to portray exaggerated images of femininity and androgyny.

The importance of flowers and floral imagery and their relationship to homosexual culture are treated in Chapter Six. The relationship of flowers and floral codes to homosexuality led to the use of “pansy” as a derogatory term for homosexual men. As the public associated male effeminacy with homosexuality, the homosexual in fashion became declassé. The gender performances of the bright young things were replaced by the effeminacy of the young men who worked in clothing stores, embodied most famously by John Inman’s “Mr. Humphries” on the long running television series, Are You Being Served? The fashionable freak of the 1920s was now associated with young, pretentious, lower-class males.

Overall, Janes wants the reader to understand that during the period between World War I and World War II, queer spectacle was a component of glamour, fashion, and that in this period, androgynous self-presentation was fashionable. Freak to Chic is, nonetheless, more a group of related essays than a sustained argument. Each chapter is full of information and informative insights—so much so that a coherent argument gets lost. The book is fully annotated and copiously illustrated with photographs and cartoons that satirize contemporary fashion, mores, and violations of the gender order.