Frankenstein: How a Monster Became an Icon: The Science and Enduring Allure of Mary Shelley's Creation 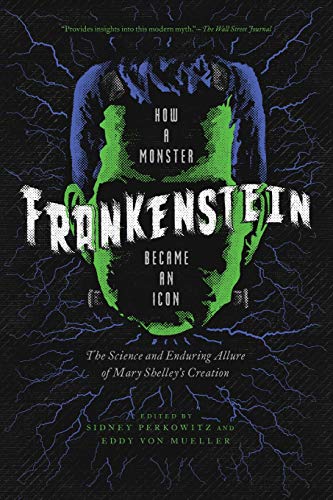 “Whether for a light read or deeper introspection, this book offers intriguing insights and opinions into the reasons why the creation of a 19th century teenaged author has become a reference and a part of our common language.”

This is definitely a book for the Frankenstein fan. Whether it’s the lovable but bumbling dad of the Munsters or the vengeance-bound creature from Hammer Film’s Horror of Frankenstein, this volume gives insight into society’s perception and reception of Mary Shelley’s monster.

Some see him as misunderstood, others as a metaphor for human suspicion and fear of the different. This collection of essays explores the phenomenon of how that literary creation has enmeshed itself into popular culture, from breakfast cereal to teaching children to count to becoming a household word.

The 13 entries are divided into three sections: Part 1, the Roots and Themes of Frankenstein; Part 2, The Monster, the Media, and the Marketplace, and Part 3, The Challenge of Frankenstein, Science and Ethics, go about explaining and delving into discovering more about the “unnamed Creature.”

There is also an introduction: Two Hundred Years of Frankenstein, written by the editors and elaborating on these divisions. An epilogue; The Next Two Hundred Years of Frankenstein, also composed by the editors, is followed by a listing of editors, contributors, and interviewees. There is a bibliography as well as a filmography the serious Frankenstein-o-phile may refer to for further information, as well as notes on the text. Doubtless some will read through the Bibliography and Filmography, checking off those sources and movies they’ve read or seen.

There are also 16 black and white and full color pages showing how various media have portrayed the Creature.

Though some essays may appear a trifle deep and academic for the occasional reader, the more scholarly aficionado will discover such little gems as an interview with Mel Brooks in which the director relates how Gene Wilder brought him the idea of the concept for Young Frankenstein.

Whether for a light read or deeper introspection, this book offers intriguing insights and opinions into the reasons why the creation of a 19th century teenaged author has become a reference and a part of our common language.