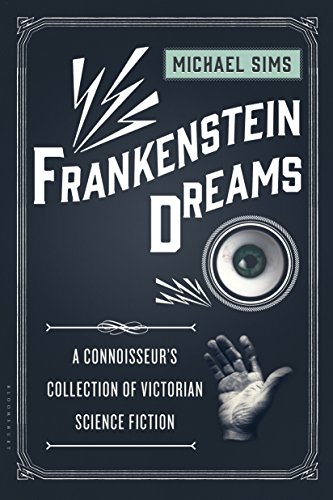 “. . . a fascinating cross-section of those tales that become the forebears of the many science fiction/fantasy stories of our 20th and 21st centuries.”

“‘I must observe the natural decay and corruption of the human body. I was led to examine the cause and progress of this decay and forced to spend days and nights in vaults and charnel-houses. I saw how the fine form of man was degraded and wasted. I thought if I could bestow animation upon lifeless matter, I might in process of time renew life where death had apparently devoted the body to corruption.”

Thus does Victor Frankenstein state his future course of study and the goal of his medical career, and thus is born a new type of literature that continues fascinating readers today.

While that genre we term “science fiction” is generally attributed to the publication of Mary Shelley’s Frankenstein, or the Modern Prometheus in 1816, if a reader choose to delve farther back in time, he might undoubtedly find earlier examples. Nevertheless, it is with Frankenstein that most modern critics date this particular facet of literature.

This anthology focuses on writings of that period, by authors well known for penning such fiction.

“During the nineteenth century, European writers often chose the less explored regions of the earth as settings for tales of marvel and wonder. By the mid-Victorian era, imaginary trips to unexplored regions were hugely popular . . . science fiction uses technology or other nonmagical means to transcend the narrative limitations of more realistic stories, effecting the same plot boost that ghosts and vampires contribute to another kind of story.’”

Basing her plot partly on the emerging science of the day, Mary Shelley relies heavily on Erasmus Darwin’s ideas of reanimating corpses in a tale still being expanded on today; Edgar Allan Poe cites Mesmer’s theories of hypnotism, with frightening results; and Alice W. Fuller explores, with a comical outcome, the problems in creating humanoid androids in “A Wife Manufactured to Order.”

“‘Now, young man what can I do for you? Want a life-companion, a pleasant one?’”

‘Do you mean to say you can manufacture a woman out of wax, who can talk?’

“That’s just what I do; you give me the subject you most enjoy talking about, and tell me what kind of a looking wife you want, and leave the rest to me.’”

Excerpts taken from Frankenstein, as well as Jules Verne’s Twenty Thousand League under the Seas, and Stevenson’s Dr. Jekyll and Mr. Hyde justify those authors’ exclusion in this volume, while others have their stories reproduced in their entirety.

To the modern reader, a good many of these tales will be considered wordy, for some seem merely essays, with little or no dialogue, and a good many of the words themselves are definitely of the more than two-syllable variety. The phrasing may be stilted, or quaint, accustomed as many now are to the frank, sometimes grisly narratives where the author lovingly describes each splintered fragment and flicker of flame and doesn’t hesitate with expletives.

Though they undoubtedly amazed the readers of their era, today, in view of discoveries by men actually setting foot on the moon, some now seem rather tame, even naïve, and indeed laughable in their speculations.

In “Man-bats on the Moon,” the narrator explains that “the moon has an atmosphere constituted similarly to our own, and capable of sustaining organized, and therefore, most probably animal life.”

The lunar sphere is also described as having “a level green plain” trees, and water, “breaking in large white billows upon a beach of brilliant white sand.”

Editor Sims has amassed a historical and interestingly diverse example of the speculative writing of the Victorian Era. With an Introduction explaining some of the scientific discoveries and theories of the day and linking them to specific stories, the anthology sets the mood for what is to come. There is also a brief biography of each author. A Bibliography and List of Suggested Reading follows the stories for those who wish to further pursue this particular literary niche.

In between are tales both fascinating and outlandish, often frightening in aspect, and occasionally thought-provoking in their themes and the questions they ask, but always entertaining.

As Mary Shelley says in her preface, “Once again, I bid my hideous progeny go forth and prosper . . .”

Hideous or not, that progeny had done exactly that.

This volume contains a fascinating cross-section of those tales that become the forebears of the many science fiction/fantasy stories of our 20th and 21st centuries.