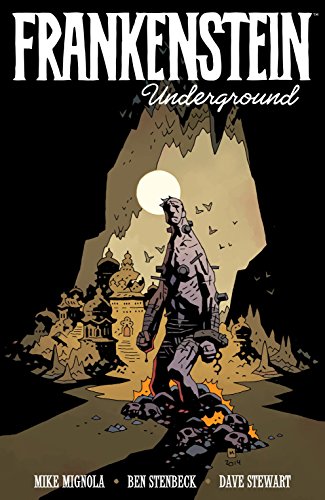 Somewhere in Mexico, 1956, Frankenstein's monster comes upon an old woman in a Mayan temple. He recently escaped a Mexican laboratory and a fight with Hellboy. Thus begins Frankenstein Underground, a new graphic novel written by Mike Mignola with art by Ben Stenbeck.

Mr. Stenbeck preserves the Mignola look, a signature blend of chiaroscuro, fantastical monsters, and pulp fiction energy. Mignola and Stenbeck preserve the literary Frankenstein monster in this tale of horror and revelation. Frankenstein's monster is very old, created by the mad scientist Victor Frankenstein in Ingoldstadt, Germany in 1792. But the monster is articulate and tortured. He faces not only external enemies but also an existential crisis.

Throughout the centuries, Frankenstein's monster has been a bare-knuckle boxer, a fugitive, and a sideshow attraction. He calls himself “a thing” and constantly wonders what his purpose in life is. His monstrous origins betray a common conflict inside humanity. Even though he was cobbled together from the body parts of corpses and animated through the perversions of science, he struggles to come to terms with his humanity.

Amid the existential anguish, Mignola and Stenbeck bring the inevitable admixture of horror, pulp, and occult genres. During his adventures, Frankenstein's monster flees underground, only to encounter fantastic monsters and ancient peoples. The graphic novel presents layer upon layer of new revelations. This is a universe inhabited by strange people in the hollow earth, vengeful demons, and Lovecraftian eldritch abominations. Frankenstein's monster learns the origins of the Ogdru Jahad, the cosmic horror that birthed Hellboy. Not only are various aspects of the Hellboy cosmology linked together but the cosmology is also expanded.

Frankenstein's monster seeks redemption for his past crimes. When an American scientist discovers the monster, an opportunity for redemption presents itself. The scientist isn't as benevolent as he seems. Darker agendas are buried beneath sweet-sounding rhetoric, appealing to the monster's desire for peace and rest.

Frankenstein Underground seamlessly weaves together cosmic horror, pulp fiction, and crackpot conspiracies. Standing in opposition to these universe-wide evils are the Frankenstein monster's existential struggles. He fights monsters and battles bad guys, but he really wants to know why he's still alive and what his greater purpose is. He seeks death, only to find others dependent on his heroics.

The existential struggle occurs in a believable organic way. None of it seems contrived or artificial. Despite the pulp fiction lineage in the various Hellboy franchises, cheap emotional exploitation isn't a means to curry sympathy for the tortured monster. Mignola and Stenbeck have given the world a monster closer to the narrator in Jean-Paul Sartre's Nausea than a Jodi Picoult weepie. After all the monsters and villains are vanquished, Frankenstein's monster's struggle to come to terms with his own existence remains the greatest challenge.

In addition to the great storyline, the Dark Horse graphic novel reprinted several pages from the sketchbook for Frankenstein Underground. It shows earlier iterations of the Frankenstein monster and other characters. Captions reveal the collaborative process between Mignola and Stenbeck. While Stenbeck renders the comic in the Hellboy franchise house style, Mignola lets him create new and fun monsters. As Stenbeck states, “You can't have too many monsters in one comic. That's just science.” That joyous attitude gets translated into a fun graphic novel.