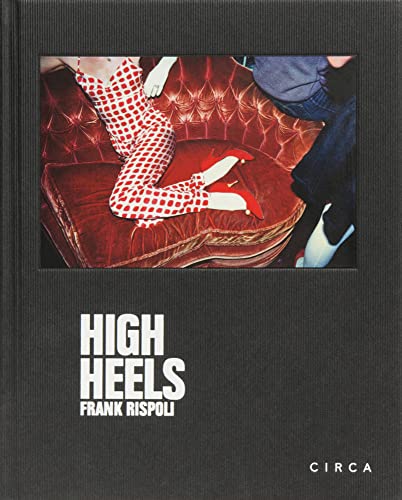 This book is all about high heels, as is evidenced by the title, told by Frank Rispoli via approximately 110 photographs. He drew his inspiration from Guy Bourdin’s Charles Jourdan shoe ads of the ’70s, and there is no way that the informed fashion reader won’t recognize that. The difference is that Bourdin was photographing for advertising as a profession and Rispoli has employed his images as a sort of time capsule of the ’70s and ’80s, using habitués of the many clubs that dotted downtown New York City.

As Eric Bradshaw Hughes puts it, “Peering through the cracked surfaces of the battered cityscape, he harnesses the inherent power of women’s fashion and its effect on the world around it. He is not only composer; he is also conductor channeling the electricity that courses through the streets of NYC, his camera, the exposed wire shooting sparks and snatching pure moments from thin air.”

Rispoli was by day an environmental designer and teacher, among other professions, and then by night he shed his “Clark Kent suit and glasses,” and became a type of Superman—except with a camera strapped around neck—capturing NYC club goers. Rispoli will remind many readers of the gritty city of that era, and quite simply, what a blast it was to live through those times and encounter those who frequented the nighttime scene.

As Rispoli states at the end of the book, it was the ungentrified and unhomogenized New York City that can best be recalled by those who experienced it firsthand. If you weren’t that lucky you can use Rispoli’s images as a source for exposing those decades as they were. There is little text to be read as the genuine story is in the images, but the existing text does provide some context to accompany the photos.