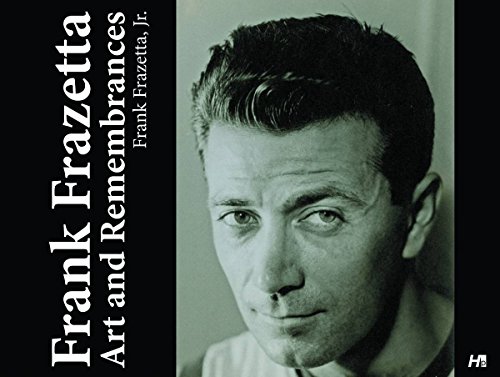 “This wide-ranging collection . . . is a perfect tribute from his biggest fan—his son.”

Frank Frazetta knew from the beginning that he was an artist. In 1947 Frank Frazetta was offered a contract to play professional baseball with the New York Giants. Realizing that his heart and his talents lay elsewhere he declined.

To become a professional baseball player would have been a waste of time. From his earliest days he had sought out any surface that he could fill with art. Empty pages at the back of books, toilet tissue, any surface he could find, he drew on it.

It wasn’t just work with pencils, either. He carved animals from soap he had stolen from the cabinets of his parents' house. Knowing that he had to understand what he was drawing he would sit for hours and watch the jungle cats as they walked and rested inside the tight confines of their cages of the Brooklyn Zoo.

Filled with a good amount of previously unseen art and overflowing with memories that only a son could provide, Frank Frazetta: Art and Remembrances is the perfect mixture of biography, testimony and reverence.

As he writes of his father’s life Frank Frazetta Jr. takes us back to the days when his father was growing up in Brooklyn. The neighbors, the dogs, the life that inspired him—all have a place in the art that follows.

While many revere and idolize his work in the worlds of science fiction and fantasy, his son Frank Frazetta Jr. gives us a look at what shaped and drove his father. We see who the artist really was.

While many only see the violence and darkness found in some of his most famous pieces, Frazetta Jr. tells us that we would be much better served by looking towards the gentle nature of his father’s work. He suggests we look for books that feature art he drew for funny animal comic stories.

By looking at this early work we would see the quite and understanding nature of his father. It is a soulful side, one that treasured the voice of Sinatra or the way he took care of those around him that he took pains to hide from many others lest they take advantage of him.

The artist created a stunning amount of high quality work in his day. He had an instinctive understanding of human form. He could exaggerate those qualities with astonishing precision. The drawings may have been at the boundaries of realistic interpretation, but they never once crossed over into absurdity.

The animals he drew were truly threatening. No one could bring a panther to life as he could. The cat’s eyes filled with determined, mindless menace, his body rippling with tension as every muscle prepared to launch itself in either defense or combat. Even when he painted an animal in repose Mr. Frazetta filled the beast with the dignity of life itself.

As his work on movie posters and for MAD Magazine proves, he was a skilled portrait artist as well. When he depicted deep space you found yourself on the spaceship stunned at the vastness of all of creation. His work was a clear and acknowledged inspiration for Star Wars and other science fiction stories.

One of his earliest jobs was drawing covers for the now forgotten Famous Funnies comic anthology title. His work on several of the covers featuring Buck Rogers will still stun you—as will the work he did on the titles Weird Science-Fantasy and Weird Fantasy.

After seeing much of Mr. Frazetta’s early work, Al Cap offered him work as a ghost artist on Li’l Abner. This was prime time and prestigious work for the day. The job lasted for nine years. After leaving Capp, Mr. Frazetta moved into the world of paperback covers. Always respected by others in his field, this was where the public really began to notice his work.

The covers he created for paperback editions of Tarzan and Conan drew people across the street and straight to the newsstand. No one could capture the glory of adventure and the menace of battle like Mr. Frazetta.

As he moved into horror his demons, ghouls and monsters can scare even the biggest skeptic. His skill with brush and pen makes each subject real. His ability to capture light and the way he used it to enhance his subjects is stunning.

Among numerous photographs offered in this collection are views into the way he worked. There are shots of the tools of his trade, how he kept his brushes, the way he held a pencil, and how he used live models to inspire him.

There are incredibly detailed reproductions of his cover work. Displayed in full color the dragons, dinosaurs, swords, werewolves, sorcerers, kings, spaceships, barbarians, landscapes, and women he brought to life set standards for generations to come.

Frank Frazetta drew believable and honest images of strength because he held himself to the highest standards he knew. And as his son shows us through his writing that the artist knew who he was. He had a code and a sense of true loyalty and honor. Maybe this was why he was so adept at portraying the nobility of the human condition.

He loved his art and never once sold himself or his own work short. Where others pay lip service to “their art and craft” Frank Frazetta lived by his word and never violated his own exacting standards. Offered a million dollars for one painting, he turned it down because it was his favorite work, and he wouldn’t part with it—he loved art and respected his own gifts.

This wide-ranging collection of original drawings, paintings, photographs, memories, stories, and art is a perfect tribute from his biggest fan—his son.