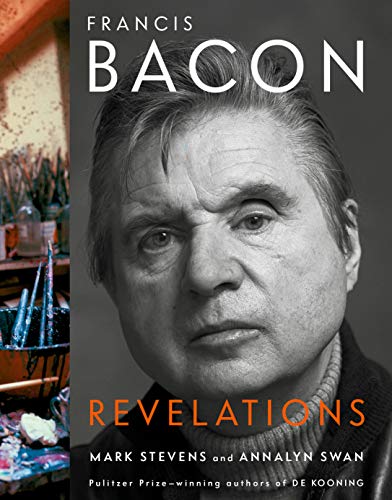 “an engrossing portrait of the artist, his art, and his incorrigible personality.”

Francis Bacon turned the art world inside out with his grotesque portraiture and scabrous figurative depiction of the human form. Controversial and undaunted by critics, he eventually became one of the most celebrated and wealthy artists of the era. Yet he never stopped being a rogue artist living an often self-destructive, but accomplished life, personally and professionally. Francis Bacon: Revelations by Mark Stevens and Annalyn Swan is an engrossing portrait of the artist, his art, and his incorrigible personality.

He was born in Dublin in 1909. He grew up with asthma so severe that he was kept out of school until age nine. His military father avoided him even as a child when he expressed an “effeminate” nature. His mother nurtured his “artistic” talents but was emotionally distant. He grew up surrounded by British-Irish aristocracy and wealth, but lived in his own private creative world of sickly and internalized insecurities. He formed lifelong bonds with those who took interest in him, his grandmother and sister were very close, and Nanny Lightfoot kept close to him when he became a professional artist.

As a teen Bacon had the usual schoolboy crushes and encounters with other males in prep school. By his late teens he was on his own in Berlin and Paris, where he made a name for himself as a designer of furniture and rugs. He opened a design studio in Chelsea and started sketching and painting abstract canvases and making influential private connections with wealthy patrons who supported his work and his life.

After seeing a major exhibit of Pablo Picasso’s cubist work, he realized that Picasso’s template was based in formal technique. Bacon realized that he basically needed to start from scratch and took private lessons in Paris, emulating Diego Valázquez’s figurative oils from the 17th century, but developing his own template of figurative portraiture. His canvases started to burst with vibrant color and spectral geometrics, as well as spectral imagery. And most famously, editorial religious iconography, and livid, melting, eviscerated portraiture.

Bacon had many detractors, but his work gained more respect from the British art establishment. Meanwhile, he kept painting and making inroads with agents, galleries, and private patrons. He used key associations with older men who had connections in the art world; and Erica Brausen, a lesbian gallery owner, was his tireless agent, booking exhibitions in London and Berlin.

His work was visceral, disturbing, and raw in its implications of a violent, dystopian post world war world. He often agreed with dismissive critics, but mostly didn’t give the fusty art establishment a second thought.

All of these antics and high-profile louche life eventually added to his desirability as an artist with clout. By the mid-1960s, he was given a mid-career retrospective at London’s Tate, and the Paris art world embraced him as the most celebrated, daring artist of the era.

Even the British Royal College of Art (RCA) latched on to his relevance and hired him to substitute in a class for an established artist; he was so effective they invited him back. His star power at his openings never lost its luster, and he could be as publicly charming as he was socially merciless. None of this success intruded on his lifestyle as an out gay man pursuing a rogue artist life. He would escape to Monte Carlo or Tangier and agents and investors would have to track him down.

Bacon had major exhibitions, often putting off the work till deadlines loomed, but never stopped his practice of destroying more canvases that he didn’t like, so galleries, agents, and brokers were frequently scrambling to cover him and goad him to fulfill commitments.

Bacon’s private life impacted his art in every way, positively and negatively. His first serious relationship was with a handsome, rakish RAF pilot James Lacey. Lacey was an independently wealthy jazz musician and completely adrift. Their affair was explosive and passionate emotionally and sexually; it was also mutually sadomasochistic, but with blurred boundaries that would lead to breakups and desperate reunions. Lacey fled to Tangier, leaving Bacon in despair, but a year later, Lacey wanted him to join him, and Bacon dropped everything in London for a reconciliation.

But he soon fell into familiar destructive patterns, and there was an official bad breakup. But when Bacon learned of Lacey’s sudden death, he was privately grief stricken.

Part of the artistic foreplay was fueled by heavy drinking, drug use, and explosive engagement with paint, subject, and canvas. He was rapacious sexually, though he didn’t like casual pickups or cruising. Bacon cultivated a series of lovers, most famously with George Dyer, a petty burglar who was otherwise adrift and troubled. There was mutual devotion in these often tumultuous relationships, inevitably codependent, with mutual physical and emotional sadomasochism.

For Bacon, the volcanic chemistry he had with his lovers was part of his process for visceral engagement as an artist; if it didn’t explode on canvas Bacon often destroyed the canvas or sold it fast because he needed the money. His other addiction was gambling. As an older artist, he didn’t slow down, and his health was precarious as ever, yet he didn’t stop drinking, or carousing; his liver was distended for much of his adult life.

Few art writers of his time discussed the gay sensibility of Bacon’s art. His portraiture of his long-term affairs with Dyer, Peter Lacey, John Edwards, and his coterie of friends from the Colony, a gay pub, were central to his life.

Stevens and Swan also co-authored the 2015 Pulitzer Prize-winning De Kooning: An American Master and are in top form with this biography. Their detailed analysis of Bacon’s artwork is vigorous and accessible and for the most part as interesting as their chronicles of Bacon’s sex life, gambling, professional feuds, and glamorous art gallery fetes. The book includes 90 archival photos and fine color transfers of some of Bacon’s most defining works of art.