A Franchise on the Rise: The First Twenty Years of the New York Yankees 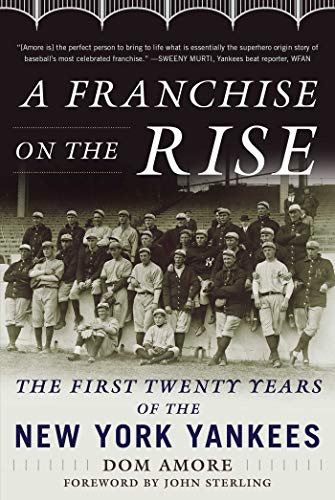 Yankee Stadium is loud. Before the game, the sound system is cranked up, often accompanying documentaries flashing on the gigantic centerfield video screen and hundreds of TVs scattered around the concourses, all redundantly attesting to the greatness of the team in a looping-litany of baseball stars—Babe Ruth, Lou Gehrig, Joe DiMaggio, Mickey Mantle, Thurman Munson, Reggie Jackson, Derek Jeter, Mariano Rivera, and if you want to add admitted steroid user Alex Rodriguez to the pantheon (he won two Most Valuable Player awards playing for the Yankees), go ahead. It can be reasonably argued that the vibe at Yankee Stadium is the most bombastic experience in all of sports.

So it’s easy to forget that things weren’t always so glitteringly, and loudly, triumphant. It all started in 1903 for the American League franchise that would become the Yankees, on a scrappy lot in upper Manhattan that became Hilltop Park. It took 20 years of failure, some semi-success, and a gallery of scoundrels both on and off the field, for glory to settle in with an astonishing new stadium and its first World Championship, both in 1923, and to establish the culture of winning and arrogance that has become The Yankees.

The journey from a rocky, vacant lot, and no roster, in 1903, to topping the world in 1923, is joyously told in A Franchise on the Rise: The First Twenty Years of the New York Yankees, Don Amore’s new book. In 1903, we find American League president Ban Johnson eagerly, perhaps desperately, trying to establish a team in New York over the objections and obstruction of the National League’s New York Giants, and Johnson’s old nemesis, Giants’ manager John McGraw.

After fits and starts, Johnson settled for two New York operators, former police chief “Big Bill” Devery, who coined the term “honest graft,” and bar-owner/gambling operator Frank Farrell. Farrell and Devery are an astonishing duo—above the law, bestride the law, skirting the law—a pair that knows how big decisions come to fruition in their city.

Farrell presented Johnson with a $25,000 check for the right to attempt to put a team together, and as important, find a site for a ballpark. Devery and Farrell put a deal together with the New York Institute for the Blind for a lease on a scrappy ten-acre parcel between 165th and 168th Street, bordered on one side by 11th Avenue, in Washington Heights, with nice views of the Hudson River and the New Jersey Palisades. The dynamic duo convinced the powers-that-be to close off the streets that threatened to dissect their lot, and so work began.

The rocky site was subjected to aggressive drilling and dynamiting, but within a few months, a 16,000-person ballpark and baseball field were ready for opening day, April 30, 1903 (albeit with a swale in right field). As important as getting it done, Joseph Gordon and John B. Day—gents with good reputations—would be the faces of the new franchise, leaving Devery and Farrell content with raking in ticket receipts and “honest graft,” and whatever prestige and side benefits (gambling could never be ruled out) might accrue from running a team.

A Franchise on the Rise lets us spend time with early Highlanders (“Yankee” would stick about a decade later) “Wee Willie” Keeler, Roger Peckinpaugh, “Prince Hal” Chase, Frank Chance, “Home Run” Baker, Jack Chesboro’s 41-win season, delves into a 1909 scandal involving stealing opposing teams’ signs, explores May 15, 1912, when Detroit’s Ty Cobb climbed into the stands to beat up a heckler who was revealed to be a cripple, and futile pennant chases—all of it retold with plenty of detail and wit.

What made the Yankees THE YANKEES is when Devery and Farrell sold the team to the two colonels: Ruppert and Huston. Jacob Ruppert, as many Yankee fans know, was a brewer with a plant on the Upper East Side, a civic-minded former U.S. Congressman. Tillinghast L’Hommedieu Huston was a civil engineer originally from Buffalo, N.Y., who raked in a fortune clearing Cuban harbors during and after the Spanish-American war. The two bought the team from Devery and Farrell for a bit less than half a million dollars, as the deal was announced on New Year’s Day, 1915.

Perhaps only Devery and Farrell could have set up a team so quickly in 1903, and perhaps only Ruppert and Huston could have set the operating procedures, hired the right staff (Ed Barrow, who oversaw baseball operations), architects, and builders, to create the most valuable franchise in all of sports.

The Institute for the Blind didn’t renew Hilltop Park’s contract, so for ten seasons, 1913 to 1922, the Yankees shared the Polo Grounds with John McGraw’s Giants, and Ruppert and Huston methodically sifted possibilities for building their own ballpark. The result, in 1923 (a year after Huston sold his part of the Yankees to Ruppert for $1.5 million) was Yankee Stadium, the most astonishing stadium ever built in North America up to that time.

The content of A Franchise on the Rise is choc-a-block with great stories. It’s a thoroughly-enjoyable must-have for any seasoned Yankees fan, fan of baseball, or fan of New York City history. The physical book itself, with somewhat widely spaced lines, cheap newsprint, lack of an index, and glaring typos, seems rushed into being, not unlike old Hilltop Park, and oddly, adds to its appeal. Dom Amore has accomplished something almost impossible, a book about the New York Yankees that is utterly charming.