The Frame-Up (The Golden Arrow Mysteries) 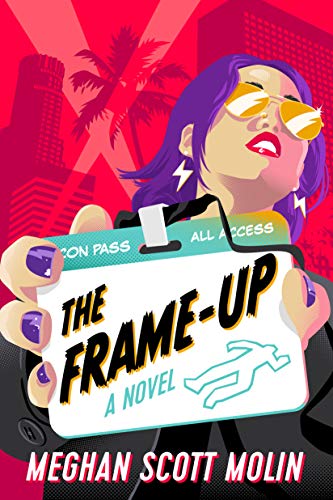 “The Frame-Up has the flavor of an old-time mystery with the feisty girl detective, her more staid but game boyfriend, and a plethora of wisecracks and hairbreadth escapes to keep things lively.”

Michael-Grace Martin (or “MG” as she likes to be called), is one of the writers working for the son of the creator of The Hooded Falcon, Edward Casey Jr, creating comic book storylines and plots.

This particular morning, she’s impatiently waiting in line for her morning coffee when she happens to glance over the shoulder of the customer ahead of her.  He’s busy reading his iPad and the headline catches her eye. The story is about a local drug bust, but the photo looks like something straight out of The Hooded Falcon. She remarks on this and—Hey  Presto!—the next thing she knows, she finds herself hired as an expert  consultant for the LAPD, because the owner of the iPad Just happens to be a cop.

Well, maybe it didn’t happen quite that fast, and maybe it was partly because said cop is cute, in a hipster sort of way—“Slightly rumpled bedhead, five-o’clock shadow, jeans and rolled, slightly rumpled nice-ish work shirt”—and obviously likes the way she looks, too, but soon MG and Detective Matteo Kildaire are hot on the case of the vigilante patterning himself after the hero of The Hooded Falcon comic, and a decades’ old mystery that might also involve the murder of the Falcon’s creator.

“The chance to watch a real-life comic book plot unfold and save my idiot coworkers from repeating history and stirring up a drug feud, not to mention the capes and costumes in play? It’s like my entire life has led to this. My name is Inigo Montoya and I have found the six-fingered man!”

The comic book’s creator, Edward Casey, Senior, used contemporary crimes as the basis for his plots. Though his death was officially a heart attack, he may or may not have been murdered before he could use the comic strip to expose a real life crime boss and a crooked cop on his payroll.

“The story line was dropped in the new series. In the old one, it’s set up as a big reveal. They find the drugs. Falcon is going to unmask him. They’re going to expose him, but the new ones tie it up in a matter of pages. This has always bothered true followers of the Falcon. Casey’s journal would prove he planned to unmask the double agent.”

The only problem is that all the journals are available, except that specific one. Where is it, or does it even exist?

“This is ludicrous, Kildaire. This guy died of a heart attack thirty years ago. We are chasing a thirty-year-old ghost, and we’re losing the trail of the real drug guys by following this false trail.”

When Matteo suggests he pose as MG’s boyfriend so there’s a logical explanation for their being together so much, MG can’t find a reason to argue. After all, she likes having him around, would like that pretend role to become a real one, if only it didn’t involve both of them being in danger so often or maybe getting killed before the final clinch.

“Why, when this comic has helped my life for so many years, is The Hooded Falcon wreaking such havoc this time?”

Throw in a Star Wars marathon, and the chaos of a Drag Review gone wrong, and it all adds up to a storyline worthy of Casey Sr himself—except in this story, people can really get killed and there’s no cliffhanger escape.

For lovers of the nerd and the absurd, indeed, anyone who likes comic books—and proudly admits to being a geek—this novel is for you! Filled with references not only to comics old and new but also to TV series and movies, it will jog the memory for old favorites, and bring back fond reminiscences of more recent ones. The Frame-Up has the flavor of an old-time mystery with the feisty girl detective, her more staid but game boyfriend, and a plethora of wisecracks and hairbreadth escapes to keep things lively.

While the reader may find it difficult to believe, in this day and age, that someone would not be at least familiar with some of the characters spoken of, even if not actually knowledgeable of the origins and plots involved, Detective Kildaire’s ignorance (he’s never seen a Star Wars movie, nor heard of Harry Potter) becomes an amusing plot-point and is shaped to fit in with whatever happens, leaving MG to step in with explanations at the proper time.

This fun novel will be appreciated by those “in the know,” and enjoyed by the reader who likes a story filled with snappy give-and-take between hero and heroine, while being a pleasant surprise for the mystery fan.