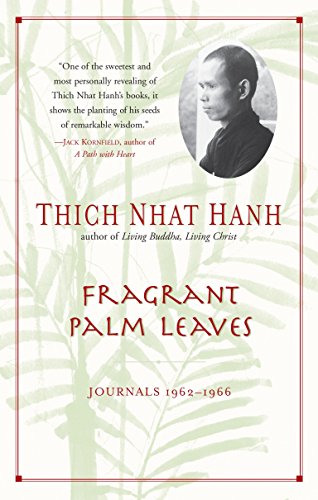 Fragrant Palm Leaves is the work of a person in his mid-thirties coming to terms with realistic acceptance of the meanings that arise from his monk’s training and leadership role in trying to reform Buddhism in his country, Vietnam. Included in these musings are the great possibilities of leadership and mission as well as significant disappointments of personal loss.

The strength of the journals lies in Hahn’s honesty in his writing. The journal entries are not private musings but poignant and often powerful reflections, inspirational messages directed at his followers. A controversial figure in Vietnam as he went into to exile (for the first time) in May 1966, he wrote that he doubted if the collection would pass the censors. “If it can’t be published, I hope my friends will circulate it among themselves.”

The memoir opens in 1962 in mid-winter at Columbia University in Manhattan and at Princeton University in New Jersey. Thay is in exile from Vietnam for his controversial challenges of the government and the traditional Buddhist hierarchy in Vietnam.

Thich Nhat Hanh, in his eighties now, is a Zen Buddhist master, a peace activist and the founder of global Communities of Mindfulness. He has written scores of books and is known affectionately by followers as “Thay” (teacher in Vietnamese).

In the first section of the journals many striking descriptions of Thay’s reminiscences of the secluded mountain monastery and retreat he built with his friends and comrades—monks and nuns—at the place they named Phuong Boi contrast with his descriptions of the stark winter beauty of an American northeastern winter. “Phuong” means “fragrant” and “boi” is a palm leaf on which the “teachings of the Buddha were written in ancient times.”

Anyone who has resonated with a “place of the heart” now lost to them will be powerfully moved by Thay’s descriptions of life at idyllic Phuong Boi and his sheer joy in the beauty he finds there. His realization that he cannot remain attached to this place is a lesson for us all. As he writes, quoting another monk, “Phuong Boi doesn’t belong to us, we belong to Phuong Boi.”

Whether it is in the starry sky in Vietnam or a winter storm in New Jersey, in any place he lives Thay finds solace and cosmic connection to nature. “I still respond to the call of the cosmos . . . with all my body, with every atom of my being, every vein, gland and nerve, I listen with awe and passion. That is how I feel when I hear the call of sky and earth.”

Among many other reflections Thay touches on the passing of youth and the permanency of truth. He shares several instances of his own growing realizations on the nature of reality and illusion. These moments contain the clarity of awakened understanding. They are illuminating and encourage us to continue in our practices knowing that we, too, can experience the conviction of Truth. “How can we continue to live if we were changeless? To live we must die every instant. We must perish in the storms that make life possible. I cannot force myself back into the shell I’ve broken out of.”

Thay returns to Vietnam in 1964 after his stint lecturing in the USA and although Phuong Boi has fallen into ruin in the tropical environment, he and his cadre of followers devise Buddhist practices in the impoverished rural village communities where they find themselves. These practices are the bedrock from which will evolve the Communities of Mindfulness that Thay will establish around the globe. Several years later Thay goes into permanent exile and settles in France where he builds Plum Village, a monastery and retreat center serving thousands of followers over many decades. There are several Communities of Mindfulness in the United States committed to serving the spiritual needs of all.

A satisfying read on many levels: a great introduction to Thay’s ideas, to the majesty of his poetic writing, and to understanding the inspiration for his spiritually based activism.