The Fox Was Ever the Hunter: A Novel 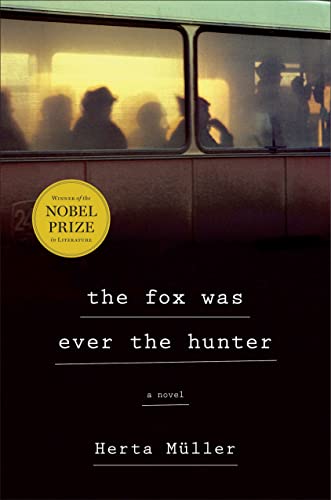 In the last months of the Ceauşescu regime, four people struggle to survive in the suffocating, corrupt, and ossified atmosphere of Romanian totalitarianism. The Fox Was Ever the Hunter by Herta Müller tells the story of Adina, a young schoolteacher, and Paul who is a musician. Adina’s friend Clara works in the nearby wire factory, and Pavel is Clara’s lover. Of these four, one of them is an informant to Romania’s secret police.

As the story progresses Adina finds her fox fur rug has been mutilated. This keeps happening, each leg sawed off and left there. While The Fox Was Ever the Hunter may appear, at first blush, to be a novel of espionage and intrigue, it is something else entirely.

Ms. Müller won the Nobel Prize in Literature in 2009. The Swedish Academy awarded it because her writing is imbued “with the concentration of poetry and the frankness of prose, depicts the landscape of the dispossessed.” Despite the spies, surveillance, and tyranny, the Romania she presents appears like a fairy tale. There are villains and heroes and an evil king, in this case Nicolae Ceauşescu. Ceauşescu ruled with an iron first from roughly 1967 to 1989. While not a character in the novel, his presence hovers over everyone and everything like an infection. Müller, writing in German, creates a fairy tale atmosphere, but this is a fairy tale with no redemptive arc and no escape.

German is the language of the persecuted German minority in Romania. Ably translated by Philip Boehm, who has translated other novels by Müller, he captures a language associated with other critics of tyranny like Franz Kafka, Karl Kraus, and Heinrich Mann. Müller’s language inhabits a zone of alienation, fear, and sterility experienced in Kafka, but also Samuel Beckett. Stripped down, strange, and deceptive, it uses beautiful poetic expressions to describe a culture desecrated by the ego of an autocrat and his arrogant minions.

At the wire factory, Clara endures the advances of the factory’s director, a corrupt sexual predator. “The cat can smell whenever the supervisor takes a woman off to the left corner of the warehouse. He leads them down an aisle between the heaps of clothing and up to a lair hollowed out of the gray mountain, right below the window. The women lie on the slope of clothing, so when they lift their legs their feet are the same height as their head. When Grigore undoes his pants, the cat comes in off the roof and sits on the top of the mountain, overlooking the lair. From the women’s point of view the cat is sitting upside down, because their rubber boots are raised above their eyes. The eyes of the women race through their foreheads to the eyes of the cat. Shoo her away from there, say the women, shoo her away. And Grigore says, that doesn’t matter, she can’t see anything, let her be, that doesn’t matter at all. The cat twitches her eyes and watches.”

The language, deceptively simple, peels away to reveal the micro-aggressions taken as normal in a totalitarian regime. What the dictator, who Müller calls “the forelock,” does to the country what the supervisor Grigore does to these unnamed women.

The novel’s prose is a relentless barrage of declarative sentences and surreal expressions. It can be a slog to get through, but the slog will offer hidden rewards. Later in the novel, the musician Abi sits in an interrogation chamber. Those interrogating him reveal how a tyrannical ideology’s literalist roots wither before poetic expression.

“It refers to our country’s president, says the birthmark. No, says Abi.”

After more threats, the interrogation continues. “So write who it does refer to, says the birthmark. And the razor cut says, if we’re satisfied you can go. And if we’re not you’ll stay and think, says the birthmark.” In this novel of oppression and corruption, the fatuous actions of the two interrogators, Birthmark and Razor Cut, take on a farcical quality. The interrogators are two clowns, although that doesn’t make clowns less scary. Clowns with infinite power, no oversight, and unwavering commitment can still be dangerous.

Besides Abi’s interrogation, the novel also follows Adina and Paul as they attempt to escape the country. They leave the city and go underground, hiding in a small village on the border. In the village they hear shooting. Even these idyllic surroundings are broken by the soldiers trying to keep people from escaping. Until they cross the border, they will not be out of harm’s way. An event beyond anyone’s control changes their plans.

The Fox Was Ever the Hunter is a dark fable about the waning days of Romanian Communism. The Forelock will not rule forever. Nobel Laureate Herta Müller uses  poetic language and fairy tale imagery to expose a society suffocating under an egotistical tyrant’s cruel subordinates.