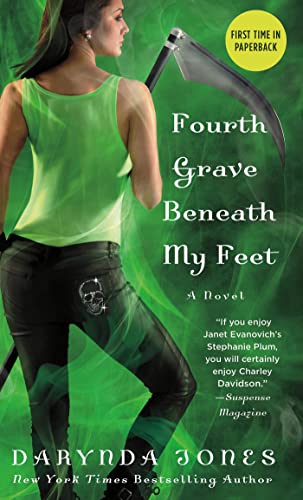 In Darynda Jones’ anxiously awaited continuation of the Charley Davidson Grave series, Charley is two months post of her near-death experience at the hands of Earl Walker.

In an effort to prove his innocence and be released from prison, Reyes Farrow secretly used Charley as bait to lure evil Earl out into the open; however, the vicious torture Charley experienced at his hand has caused her emotional scars even deeper than her physical ones, and Reyes’ betrayal—putting her in such a dangerous situation—broke her heart.

Though Cookie is still in her good graces, Charley’s father didn’t fare so well—the fact that he had her arrested while she recuperated in the hospital rubbed her the wrong way—not to mention the antics of a particular smoking-hot son of Satan, Reyes Farrow.

Casting herself into the role of agoraphobic isn’t flattering to this particular fearless female reaper, nor is the new addiction to the Home Shopping Network. But given her mindset after the attack and attitude toward her father, she chooses to give up her office above his bar and relegate herself to the couch in an effort to hide from the cruelty of the outside world.

Yet the proverbial show must go on. As Cookie resorts to her usual bag of tricks in an effort to get Charley back on track, Charley learns Reyes has a few new tricks of his own. Add to that Uncle Bob’s bafflement regarding serial arsonist, three bank robbers who look very familiar, and an intriguing new P.I. case and Charley’s blood begins to pump again.

Throw in a legion of blood-lusting demons and the innocent involvement of a young, clairvoyant, deaf boy and Ms. Davidson is right back in the saddle—almost.

Long time fans of the series may have mixed feelings about the new Charley. First, it’s difficult to see such a kick-ass, sarcastic, tough chick reduced to a sniveling, quivering victim. Domestic violence is a serious issue, but let’s not forget Charley Davidson isn’t exactly the average housewife—she’s not even the average human.

Let’s face it: This is the same woman who awoke in the first book after having her ass kicked . . . in a bar . . . by an angry husband. If Charley hasn’t been in at least two fights before lunch, she doesn’t consider it a productive day.

Perhaps Ms. Jones was just trying to show that her rough-and-tumble, smart-mouthed heroine has a vulnerable side; but with all that Charley has been through, it’s hard to believe this one instance would have such a debilitating effect on her.

While some aspects of the series continue to spin in an endless circle, at least some things progress. For the past two books Reyes has been hinting at the incredible power that Charley is capable of yet he never elaborates. At least now we get to see a little progress in that regard—although not nearly as much as we should’ve at this point.

Darynda Jones doesn’t seem to have any problem keeping up her usual snarky style and laugh-out-loud comments, but much of the plot feels lazy, falling back on gratuitous exposition as well as convenient and contrived action sequences and scenes—not to mention the over-the-top, worn-out humor of naming everything she owns.

Charley’s woe-is-me whining, as well as the ad nauseam mention of her doomed financial status wastes a lot of real estate that could’ve been used for much more productive storytelling.

Even more unfortunate, for the second book in a row, the silver-eyed goodness known as Garrett Swopes has once again been woefully underexplored, rendering him little more than a prop, despite his having quite the story to tell. And even though Ms. Jones does a great job of keeping things hot and mysterious between Reyes and Charley, it’s about time they stop with the games—all this hot and cold nonsense is starting to wear thin.

I think it’s safe to say that four books are more than enough to set the stage. One can only hope that Darynda Jones gets her head—and heart—back into the game, as she has only just begun to tap the potential of this series.

Despite the fact that much of Fourth Grave Beneath My Feet felt phoned-in, it was still fairly entertaining—and even managed to drop a few interesting tidbits along the way.