The Fourth Courier: A Novel 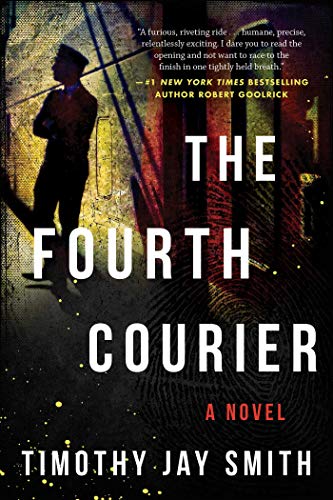 The setting of The Fourth Courier, Warsaw in 1992, couldn’t be grimmer. The Communist empire has fallen, and only corruption and cynicism seem to be left in its wake. The city is cold, damp, dark, and oppressively bleak. Most of the novel takes place at night, but even daylight seems shrouded in fog.

Four men have been killed on the banks of an icy river. They share an odd genetic mutation, and two of them have been exposed to radioactivity. And they are Russian, not Polish. The American embassy enlists Jay Porter, an FBI agent, to assist the police with their investigation. He is assigned a sidekick, Kurt Crawford, a gay African American CIA agent.

Poland is not the only former USSR satellite to be going through hard times. The former Yugoslavia is beginning to rip apart, and Serbian general Dravko Mladic has concocted a dangerous scheme to take control of his country. With the help of a disillusioned Russian atomic scientist, he will procure a portable atomic bomb and use it to control a Serbia purged of Muslims.

Mladic’s strategy is to receive the bomb in Warsaw, aided by his long time mistress police officer Basia Husarska who dreams of escaping her bleak, chaotic country. Basia is the femme fatale of the novel, an amoral person who uses her sexual attractiveness to gain control. She not only has sex with Mladic, she also has sex with Jacek, a petty thug and drug dealer who is the courier for her and Mladic. Basia’s weakness—the villains in this novel all have major Achilles’ heels—is her drug addiction.

Mladic may have passionless sex with Basia but he is a guilt-ridden, deeply repressed homosexual—his Achilles heel—which makes him easy prey for a CIA agent willing to use sex to entrap a criminal.

Veteran novelist Timothy Jay Smith knows how to spin an interesting tale. Fans of this sort of novel will recognize the somewhat stock characters: the stalwart hero; the good woman looking for love; the bad woman who uses sex. If anything, Smith gives us too many characters, some of whom are peripheral to his story. Fatherhood is a theme in the novel, but some of the sons we meet or hear about are tangential.

For the most part, the violence in the novel is quite tame, the sex not at all graphic.

The racial and sexual politics are a bit problematic. Kurt stands out in a country where blacks are a rarity. At the same time, his blackness is part of his appeal to the sadistic general who becomes obsessed with him. It’s an odd twist having the treacherous gay man be supposedly one of the good guys. Despite Kurt’s prominence in the novel, the only real romance is heterosexual. Which is to say the novel’s sexual and racial politics seem more 1992 than 2019.

Smith is great on atmosphere. One can almost smell the omnipresent corruption, but there is too little suspense and too much coincidence for The Fourth Courier to be a totally satisfying novel.