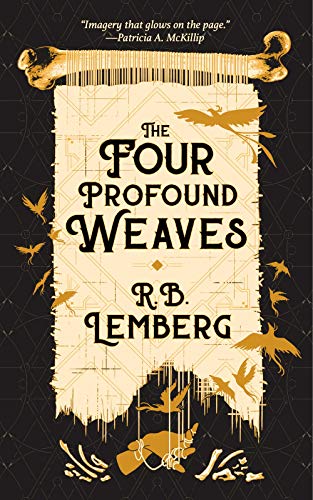 “The Four Profound Weaves is a beautifully articulated exploration of queer identity and transformation. Lemberg’s prose is rhythmic and haunting.”

With The Four Profound Weaves, R. B. Lemberg weaves a story both deeply affecting and transformative, and it could not have come at a better time; 2020 needs this book. Hope lives quite literally in these pages, woven by the characters themselves as part of the intricate magic system in Lemberg’s Birdverse. Here, each of the four profound weaves—change, wanderlust, hope, and death—takes shape beneath the hands of weaver Uiziya e Lali and her aunt, the feared master weaver Benesret.

Folkloric and haunting, the story follows Uiziya as she searches for her aunt. She longs to finish her tutelage beneath Benesret despite Benesret’s banishment, for she never learned to make the fourth and final weave: the weave of death.

She is joined on her journey by a nameless man of Khana. After years of performing the role of a Khana woman, he has at last undergone the change, only to discover that he struggles to embody Khana masculinity. He yearns for Benesret, who wove his carpet of change, to name him, believing this will help him find himself. He says, “I left the city seeking change, but now that I found it, it wasn’t death but hope I sought.” Together, their journey will take them to the places they most fear, and each will have to make a choice.

The Four Profound Weaves is a beautifully articulated exploration of queer identity and transformation. Lemberg’s prose is rhythmic and haunting. They do not flinch from truth, but neither do they dwell too long in darkness. “It is only in stories that change is easily found,” says Uiziya e Lali, but Lemberg’s first Birdverse novel is a testimony to how stories can do just that. The inventiveness of this world and its systems of magic reflects our own but does not mirror it; the possibilities presented offer hope for different ways and modes of being.

“I was old, and I wanted to live. This was my true life, life in the new body made by the cloth of winds and by the sandbirds; I could not figure out my place or my name, but this I knew: I wanted to live for decades, still, to taste the world in my true body.”

Both Lemberg’s protagonists are leaving middle age. There is something refreshing about characters feeling their mortality in fantasy. Uiziya and the nameless man do not shy away from the realities of adventuring past their prime, and their courage is all the more compelling. Nor does the novel lack in action—The Four Profound Weaves has assassins, villains, and plot twists, all packed in a slim, volume that will surely shape the future of fantasy.