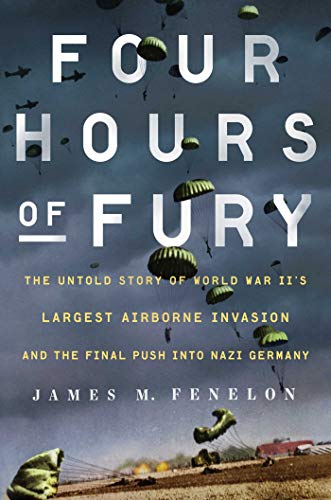 “tells the forgotten story of this airborne operation, one of the more complex operations in World War II . . .”

Numerous books and movies have been made about the numerous Allied airborne operations supporting D-Day and the debacle that was Operation Market-Garden in Holland. But the largest of these operations in terms of the troops delivered by air in a single day was in fact Operation Varsity, the drop of the U.S. 17th and British 6th Airborne Divisions over the Rhine River in March 1945.

This new book tells the forgotten story of this airborne operations, one of the more complex operations in World War II. In early 1945, the Allies had finally turned back Hitler’s last-ditch offensive in the Ardennes and begun to enter Germany on a broad front. But as they found out the previous fall when capturing their first German city, Aachen, the Germans would be even more fanatical in the defense of their homeland than they had been retreating from their European conquests. When this defensive stubbornness was combined with the natural barrier of the Rhine River, the Allies had a significant operational problem to solve.

Enter the American 17th Airborne Division. Raised in 1943 and sent to England in late 1944, the division had not gained the storied reputation of the 82nd or 101st Airborne Divisions, although the paratroopers had fought as ground infantry during the later stages of the Battle of the Bulge. The division was eager to prove itself in an airborne drop, and had an excellent cadre of officers and NCOs, many of whom were combat veterans.

When the Allies began to plan the Rhine River assault, the disaster at Arnhem the prior September was forefront in their minds. British Field Marshal Montgomery, in a decision that was not popular with many senior American officers, was given command of the operation to cross the Rhine, using his British 21st Army Group augmented by the two airborne divisions from the First Allied Airborne Army (FAAA).

The FAAA was a new concept for the Western Allies, a fully air deployable army, either by parachute or glider. For the first time in the war, the Allied Air Forces would have enough air transport capacity to drop two full divisions simultaneously, eliminating one of the key challenges that had contributed to the failure of the Holland operation.

Per his usual tactical style, Montgomery developed a thorough set-piece operational plan, ensuring both airborne divisions were dropped just over the Rhine from the planned crossing points. The heavy mechanized British formations would make quick contact with the paratroopers and ensure artillery and air support were constantly available.

Although the war was all but lost for Germany by March 1945, the Nazi regime was determined to wage all-out scorched earth resistance, and the Allied troops were keenly aware that this operation was not to liberate a country but to conquer one.

Moreover, as the author highlights, the Germans assumed the Allies would drop paratroopers to support any Rhine crossing effort and were able to make some excellent guesses about where their likely drop zones would be, allowing them to emplace hundreds of anti-aircraft guns that would wreak havoc during the operation and inflict massive losses of aircraft and men.

The author does an excellent job in interweaving personal histories and recollections with unit histories and after-action reports to give a good sense of the heavy fighting that occurred around the drop and landing zones. The 17th Airborne was very dependent on its outsized Glider Infantry Regiment to provide artillery and logistical support, as well as the lion’s share of the unit’s infantry.  The heroic tales of the fighting by both paratroopers and glider infantry to secure their objectives show the combat was just as intense as any airborne battle of the war.

Operation Varsity has long been considered an afterthought of the European Campaign, but this book shows that German forces were still willing to fight to defend their homeland. The final months of the war still saw hard fighting and although officially the 17th Airborne Division was in combat for only 66 days, the paratroopers and glider infantry of this division made a major contribution to the final Allied victory.