The Founding Myth: Why Christian Nationalism Is Un-American 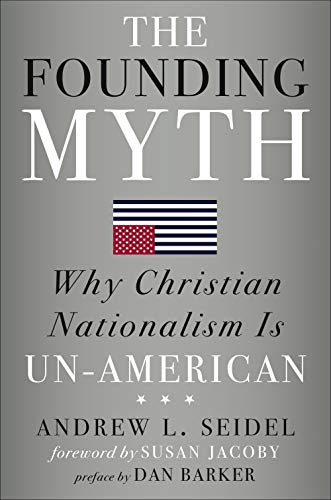 “This political environment, in which the separation of church and state is treated as a kind of heresy rather than the real rock upon which our government stands, is what makes the timing of Seidel’s book so fortuitous.”

Tackling a book on religion and the constitution is ballsy to write and intimidating to read, however The Founding Myth: Why Christian Nationalism is Un-American is filled with many illuminating quotes revealing the true intentions of the nation’s founders, which diverge from the present insertion of Christianity into the nation’s inception.

Andrew Seidel, a constitutional attorney who litigates cases for the Freedom of Religion Foundation, is a powerful muse on this subject.The Founding Myth is an invigorating double-shot espresso that reveals how the original Constitution and the version slathered in religious tomes to serve political purposes are not the same document. The former adheres to the principles of separation of church and state, freedom of speech, and the recognition of the people in the democracy. The latter is best exemplified by former Attorney General Jeff Sessions, who explained the imprisonment of children at the southern border by invoking God, “Every soul should be subject to the governing authorities because there is no higher authority except that which God has established.”

The founders of the first Congress were in fact free thinkers and more inclined to agnosticism, especially Washington. The portrait of his kneeling at Valley Forge was in fact an artist’s rendering not based on fact. The Declaration of Independence is opposed to biblical law and draws from democracies of cultures much older than Christianity, such as the ancient Greeks.

Since the McCarthy era of the 1950s Christians have lobbied successfully for constitutional exceptions to the Constitution, inserting God onto the currency, on public buildings, and even into the pledge of allegiance that children were required to cite daily in public schools. The latter would seem to be treasonous, citing a loyalty to God, rather than to the nation. And of course, there are plenty of healthcare exemptions in the name of religion, vaccine exemptions, birth control exemptions, and even withholding medical care from children in the name of God.

“To refuse to label that which is antithetical to America is to watch Christian nationalists hijack the nation.” God is not responsible for America, Washington, Jefferson, Adams, Madison, Franklin, and Hamilton were. America was “founded of the people, for the people, and by the people.” Abigail Adams, central to the nation’s founding said, “The peace and liberty were American achievements; It was not fabricated by the Loom of France nor are the materials English, but they are the product of our own American soil, raised and Nurtured not by the gentle showers of Heaven but by Hard Labour and indefatigable industry and firmness of her sons, and watered by the Blood of many of them.”

Christian nationalism views religion as a substitute for morality and above the law, so aptly demonstrated by Trump and his followers, who view themselves as the chosen ones. Secular people were more likely to demonstrate altruism in assisting the Jews in the Holocaust. As Steven Weinberg observed, “but for good people to do evil things that takes religion.”

On the first Fourth of July following Trump’s presidency, National Public Radio tweeted the entire text of the Declaration of Independence, 140 characters at a time. Many Trump supporters lost their minds, because they assumed that NPR was calling for a rebellion against Trump.

“A Prince whose character is thus marked by every act which may define a Tyrant, is unfit to be the ruler of a free people.”

Jefferson and Madison were incredibly critical and suspicious of organized religion. Jefferson wryly observed, “priests dread the advance of science as witches do the approach of day-light.”

“The founders understood that human rights are more powerful, absolute, and universal than God-given rights.” In fact, the presidential oath did not mention God; that was added in 1876. Even Lincoln wrote a book that made an argument against Christianity, attempting to show that the Bible is not God’s revelation but the work of man, but the manuscript was burned to secure his political future.

“At its core, Judeo-Christianity’s insistence on obedience and fear conflicts with America’s essential value.” Martin Luther, founder of Protestantism, called reason, “the Devil’s greatest whore.” The founders were not supplicants seeking to interpret divine revelation; they were political scientists, using reason, experience, and history to build a nation. In fact, the Constitutional Convention rejected a motion for daily prayers and made sure that religion should be separate from government.

To reveal the depths of cruelty one needs only to explore the Inquisition and learn how priests plotted, tortured, and killed dissenters, the innocent, and anyone who was perceived as less than compliant. It would seem the concept of hell conflicts with the Eighth Amendment of the Constitution, which is the right to liberty.

No analysis of Christianity is complete without the Ten Commandments, of which there are apparently several versions, including the ubiquitous Cecile B. DeMille epic. Seidel deftly addresses constitutional conflicts with the Ten Commandments. Though Catholics fought for a secular government, now Catholic schools, hospitals, and corporations pursue submission by all to Canon Law. Rape, incest, and slavery are all part of the Bible, euphemistically referred to as “the good book.” Eighty-one percent of evangelical Christians supported Trump, in part because of their strong distaste of female leaders, hence buying into the obedience prescription for women.

But perhaps the best line in the entire treatise is “the literary acid trip that is the Book of Revelations has Jesus extolling the kingdom of heaven versus that reserved for dogs, sorcerers, fornicators, murderers, idolaters, and everyone who loves and practices falsehood.” This would seem to include the vast majority of the population, people who love dogs, physicians or scientists, those having sex for reasons other than procreation, people who refuse to accept monotheism, and the liars, as in those perpetuating the virgin birth myth, when it was merely an inaccurate translation of “young woman.” OK, murderers should generally be in hell, but isn’t that what privately run U.S. prisons are all about?