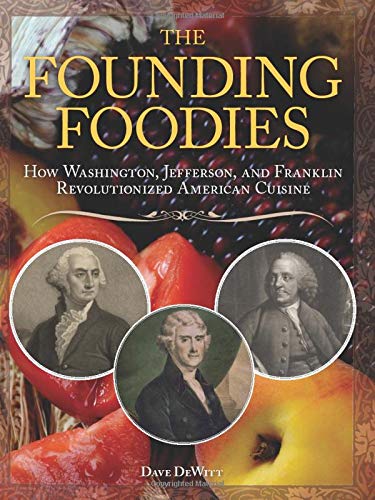 When The Great Recession hit, Americans returned to their kitchens and the classics started to make a comeback. During times of economic uncertainty, the food we grew up with seems to offer comfort and a sense of stability.

You can follow this trend in the world of food writing and cookbooks: Ina Garten’s cooking show and companion cookbook Barefoot Contessa Back to Basics (Clarkson Potter, 2008), America’s Best Lost Recipes by the Editors of Cook’s Country magazine (Cook’s Illustrated, 2007), and the classic recipes featured in the just-released The Essential New York Times Cookbook (W. W. Norton & Co., 2010), among others.

On the face of it, a book with the title The Founding Foodies: How Washington, Jefferson, and Franklin Revolutionized American Cuisine, sounds like it would fill in some of the gaps in our national trend to reconnect with our food past. It is an ambitious title that suggests that our Founding Fathers made a lasting imprint on American cuisine that was as permanent as their influence on American government. Indeed, in his introduction, DeWitt states that Washington, Jefferson and Franklin, “along with the unsung and mostly inadvertent foodies I document here, profoundly influenced the course of American food.” That’s quite a bold statement, but does the book succeed in proving it?

First, it is difficult to broadly define American cuisine. There are many regional specialties, but is there truly an American cuisine that transcends our regional differences? When you think of American cooking what are the first things that come to mind? Hamburgers would undoubtedly top the list, followed by hotdogs maybe, potato chips, fried chicken, roast turkey, corn on the cob—it’s not a very distinguished list. Now drill down and try and come up with some dishes that we are still cooking today that originated during colonial times. Not so easy is it? Roast turkey, New England Clam Chowder, Boston baked beans, succotash, and Virginia ham. There may be others, but the list is small and the dishes are mostly regional. So to say that Washington, Jefferson and Franklin “profoundly influenced the course of American food” is a bit of a stretch.

Then there’s the problem of calling our Founding Fathers “foodies.” As DeWitt rightly points out in his introduction, the term “foodie” was coined by Times restaurant critic Gael Greene in the early 1980s to describe anyone with an intense interest in food. DeWitt then expands on this by writing that “foodies, who are mostly amateurs, want to learn everything there is to know about their favorite subject—the history, the science, the industry, and the personalities surrounding food.” In order to make all the personalities in Founding Foodies fit this definition, DeWitt admits that he has “broadened the definition of foodies to include a consuming interest in any and all aspects of food, from agriculture to fine dining, and especially wine. There are also what I like to call inadvertent foodies, those unsung heroes who assisted in the development of American food not through their passion for food and drink but through their inventions: the solar salt maker, cod fishing, and the automated wheat mill.” In other words, having come up with a catchy and marketable title for the book, DeWitt has to redefine the term “foodie” in order to make it work.

At this point readers should be highly skeptical. What follows is neither particularly entertaining nor revelatory. Founding Foodies is little more than a retelling of what early colonists ate and drank based on what was available, introduced or imported as a result of commercial trade: corn, cod, pork and rum. While all of these (with the possible exception of rum) have endured in American home cooking, it isn’t clear that their prominence in colonial America was the result of revolutionary thinking foodies or just hungry colonists. We eat what is available to us and produce what we can exploit commercially.

As for Washington, Jefferson, and Franklin, their impact on American food is equally sketchy.

Washington, apparently, was the original organic farmer who practiced composting and crop rotation. Today, he would be considered a model for sustainable farming. His farming operation at Mount Vernon included commercial crops, animal husbandry, a microbrewery, a gristmill and commercial fishing along the Potomac. While Washington was a successful farmer and practiced many innovative farming techniques, there is no evidence in the book that supports the idea that Washington had a lasting impact on American agriculture.

Jefferson, on the other hand, was as poor a farmer as Washington was successful. Nevertheless, Jefferson was an epicure who could legitimately qualify as a foodie by today’s standards. His time in Paris led him to discover many new kinds of food and wine that he brought back with him to Virginia. His slave, James Hemings, learned to cook French haute cuisine and taught fellow slaves upon his return to Monticello. But did cooking French dishes and macaroni or growing fennel and other exotic vegetables at Monticello influence other American cooks or farmers? Maybe, but DeWitt fails to make the case that it did.

Finally, Franklin was neither a farmer nor an epicure, but he may have been America’s first food writer. Franklin was known to have waxed eloquently about corn and potatoes, and once gave a recipe for succotash in Poor Richard’s Almanac. Beyond that, however, there is scant evidence to suggest that Franklin had much influence on what Americans were cooking.

As for the 40 recipes that are included in the book, well let’s just say they are nothing a modern-day foodie would get excited about. In fact, there are several that DeWitt includes that are prepared the way his mother made them in the 1950s! So much for updating them for the modern cook.

There is much food for thought in Founding Foodies, but readers are likely to leave the table still feeling hungry.