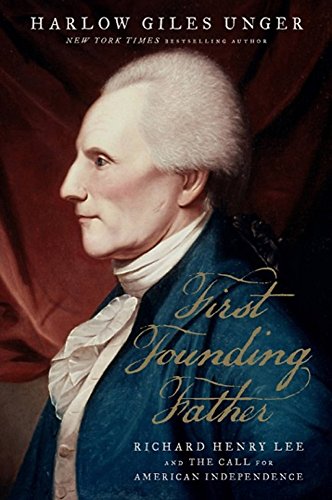 “For anyone who enjoys reading about American history, this book is most enjoyable, informative, and belongs on the library shelf.”

Author Harlow Giles Unger reached into the bag of Early American heroes to retrieve the name of one man—Richard Henry Lee—and brought him from relative obscurity to the forefront of America’s historical leaders. While Lee’s name may wander around somewhere in the back of our minds, this book, First Founding Father will elevate him to the top of the list along with Washington, Franklin, Jefferson, and countless others whom we revere as our leaders.

Throughout the book Unger uses official documents, diaries, and letters to make his point for Lee’s recognition. As Unger discusses the events that propelled Lee to the front of the call for independence, he narrates the actual words of the founding fathers to explain an event then follows up with quoted material, making it easy to understand what happened through facts.

These official documents inject strong tension and conflict throughout the story. Reading the real words in addition to the narrative gives one a sense of participation in the story.

Unger dips back earlier than just July 4, 1776 as he starts with Lee’s family background, laying the groundwork for his belief and passion for liberation from the British Empire and the need for America to fight for its independence.

Lee’s interest in politics sprung from his role as a wealthy businessman from Virginia. As he watched the many laws enacted by the King of England, designed to fill the coffers of the government while putting the hardship on the colonists, he quickly realized that steps needed to be taken to reverse these laws.

When Pennsylvania lawyer and legislator John Dickinson wrote “Letters from a Farmer in Pennsylvania” condemning the Townshend Acts, Lee was so taken with the series that he wrote an impassioned letter to Dickinson and he arranged for a special printing with a preface that condemned Britain’s Navigation Act.

As Britain disregarded the voices that were rising in America regarding the many laws enacted, Lee continued his push, insisting: “. . . Congress lay the foundation of an intelligence network in Europe.” With the appointment of Lee’s brother, Arthur, one of the first spy networks was established. Through coded messages from Arthur to Richard Henry, a considerable amount of valuable information about Britain’s plans made their way to American eyes.

And yet the laws kept coming. The Coercive Acts stripping people of their voting rights and extending the Canadian Border deeply into American territory were met with anger. But the Quartering Act legalizing the quartering of British troops in private homes was the final straw, leading Lee and Washington to take Americans to war.

Thus Richard Henry Lee took a leadership role not only in moving the country toward complete independence, but also in forming the government and establishing the constitution upon which the government would be based for centuries to come.

Lee “. . . called on each of the colonies to organize militias and for Congress to arm them in preparation for war.” Many, in support of reconciliation with Britain, opposed Lee’s “’Declaration of War,’” it was apparent that “Like Washington, John Adams, and Patrick Henry, Richard Henry Lee had declared independence.”

Unger goes into detail with regard to Lee’s passion for the fight for independence. He is described as an eloquent speaker—an advantage to achieving his goal—and this skill aided him in turning those against the idea of war with Britain to accepting it.

As the war came one wonders how a ragtag army could withstand the British onslaught, but Unger answers that question, again through the use of letters, diaries, and official documents. One senses the pain of Washington’s troops and learns the meaning of fortitude.

But Lee’s story does not end with the war. His job is not done until the Constitution is brought to completion. Lee’s passion for several issues forced him to keep his fingers in the pot.

He convinced the Confederation Congress to “pass . . . the prohibition of ‘involuntary servitude’—that is, slavery—in the Northwest Territory and the states formed within it.” Thereby establishing a boarder between the free northern and the slavery southern states.

Another passion that Lee fought for was the addition of a Bill of Rights to the Constitution, to guarantee “ ‘rights of conscience in matters of religion . . . freedom of the press . . . trial by jury . . . safety of life in criminal prosecutions.’”

Unger takes the reader through the end of Lee’s life and beyond with: “. . . when Richard Henry Lee stepped off the national stage . . . he all but vanished into historical obscurity. Although first of America’s Founding Fathers to proclaim American independence, he remains unknown to most Americans today—for a variety of reasons.

First, unlike so many other homes of founding fathers, Lee’s home no longer exists; there are no tourists to learn about his leadership role in American Independence, no papers or pamphlets to tell us of his exploits. Second, his role as Virginia’s first governor and champion of antifederalism is greatly ignored, as is his role as originator of the Declaration of American Independence “. . . a declaration that Congress adopted before Thomas Jefferson had put his pen to the document we celebrate today.”

Ironically, “ . . . the Lee family member whom Americans most remember today is . . . Robert E. Lee, who fought to divide the American people and split the nation asunder.”

Unger paints a clear and detailed picture of Richard Henry Lee and his many contributions to the founding of the United States of America. For anyone who enjoys reading about American history, this book is most enjoyable, informative, and belongs on the library shelf.