The Founders and Finance: How Hamilton, Gallatin, and Other Immigrants Forged a New Economy 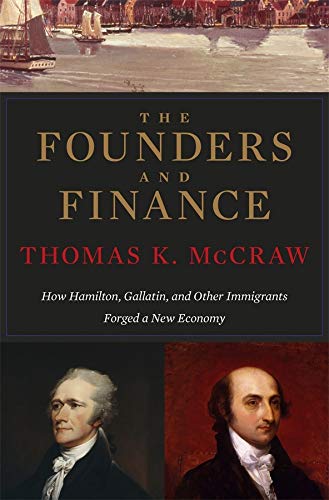 “If [Hamilton and Gallatin] had not appeared, it’s arguable whether the Constitution would have ever been written and approved . . .”

American democracy has long had a tortured relationship with its Treasury secretaries.

We expect them to have immense power over the economy. And we expect that power to be applied over the short term, in ways that satisfy our impossibly diverse and immediate needs. In short, we insist on believing in their technocratic skills and, in so doing, insist that they act politically.

But if a Treasury secretary (or a president, for that matter) has any economic leverage at all, it’s over the longer term, and even that’s problematic. As a result, Treasury secretaries may be bland and subordinate to the White House, thus avoiding political furies.

But if they are in the least ambitious, energetic, or far seeing, they will eventually find themselves out of step with the crowd, derided, ignored, out of favor.

It has been this way since the beginning, as Harvard historian Thomas McCraw clearly outlines in his accessible and informative The Founders and Finance. Mr. McCraw, the Pulitzer prizewinning author of classics such as Prophets of Regulation and Prophet of Innovation: Joseph Schumpeter and Creative Destruction has over a very long career seen historical matters through the lens of the individual, often the Great Man.

This sometimes makes his books appear out of step with fashionable historical tendencies, but it certainly works for business history and for his academic home, Harvard Business School, both of which regularly worship at the altar of the Great Man.

In this book, his 13th, Mr. McCraw deals with two Great Men, the first and third Treasury secretaries in the still-infant United States—and arguably the two greatest, whatever that means. Both Alexander Hamilton and Albert Gallatin have been written about in great depth; the former most recently in a biography by Ron Chernow; the latter as early as 1880 by Henry Adams.

Mr. McCraw tackles them together and justifies it by arguing that both were immigrants to America. He then offers up a theory about the relationship between outsiders: Hamilton was born out of wedlock in St. Croix; Gallatin was orphaned early on in Geneva, Switzerland. Gallatin, argues the author, assumed a different relationship with markets and capital than native born leaders of the new nation.

Hamilton and Gallatin were naturally drawn more toward the nation, the United States, rather than to any particular former-colony-turned-state. They were, in a much later term, rootless cosmopolitans like finance itself.

“Compared to other founders such as the four Virginia presidents, they remained personally rootless,” writes McCraw. “They saw capital as rootless too—movable, portable, migratory in the same sense they themselves were. Theirs was an agrarian age . . . But the immigrants in this book were not. They had no plantations to inherit or other businesses built by their parents and grandparents. Their ties to any state or community ran less deep than those of native-born settlers. They had no North American genealogy, no ancestral farms or manors. But neither did they intend to return to their homelands they had left.”

Mr. McCraw’s theory is certainly interesting, but he doesn’t take it very far and occasionally edges uncomfortably close to the stereotype, gestated in Europe, that those other stereotypical outsiders, Jews, somehow had a (sinister) genius for money.

He is persuasive that “immigrants”—and the term loses some currency in the context of a new nation struggling to be born and an era in which immigration was rampant—dominated the ranks of financiers and financial managers in the early days.

Gallatin and Hamilton were preceded by Robert Morris, an enterprising Philadelphia merchant, who attempted to manage financial matters, including an early bank, under the chaotic Articles of Confederation. Morris himself was born of unmarried parents and emigrated from England at 13.

Moreover, what is now known as macroeconomics was still, at best sketchy, dominated by traditional mercantilism, the writings of Scotsman Adam Smith (Wealth of Nations was published in 1776) and the French physiocrats. By its very nature, management of financial matters required an understanding of money and markets that could only really come from direct experience, most often in trade.

Both Hamilton and Gallatin accumulated that experience at early ages. What makes these two figures fascinating is the fact that they were politically opposed for most of their careers: Hamilton with his base in trade-intensive New York, was really the progenitor of the Federalist Party and served his longtime master, George Washington in war and peace; Gallatin, who settled in western Pennsylvania, was a Republican, and served under Jefferson and, less happily, under James Madison.

But for all their political differences, McCraw carefully lays out evidence as to how close they were to each other in terms of Treasury matters. Both were nationalists. Hamilton carefully prepared reports that provided the infrastructure of a solvent, diverse and prosperous national American economy; Gallatin, who spent much of his time trying to eliminate the national debt that Hamilton had used to resolve war debts from the Revolution, championed the settlement and development of the west (he tried to replace Hamiltonian taxes with land sales).

Despite their party differences, both men understood and nurtured that most controversial of institutions, the Bank of the United States. (Jefferson, who argued that it was unconstitutional, never accepted its utility. Of course, Jefferson was also, for all his attainments, nearly always in debt.)

For all their brilliance and hard work, both eventually found themselves isolated politically. By the time of his death in a duel with Aaron Burr, Hamilton had seen both the success of his ambitious plans—the debt plan, the central bank and even his Report on Manufactures—and the erosion of political favor in favor of the Jeffersonian Republicans.

Gallatin, in turn, swept to power with Jefferson, but found himself isolated over issues like the bank and the trade embargo that led to the War of 1812.

Both men faced charges throughout their public careers—a very long and happier one in Gallatin’s case, a shorter if spectacular one to Hamilton— that they were not really Americans at all; this theme, of course, persists today with the birth record questions and neocolonial charges against Barack Obama.

Gallatin, who never lost his French accent, was once forced to leave the U.S. Senate over that charge and few Founding Fathers attracted the level of scurrilous personal attacks as Hamilton.

Neither man was infallible. But the new nation was well served by the long tenure of service they provided and the innovations they proposed. If they had not appeared, it’s arguable whether the Constitution would have ever been written and approved, whether foreign credit would have appeared for many decades, or whether this fragile arrangement of diverse states bound together in a democratic whole would have survived.

Whether their particular genius can be reduced to their immigrant status remains another question.