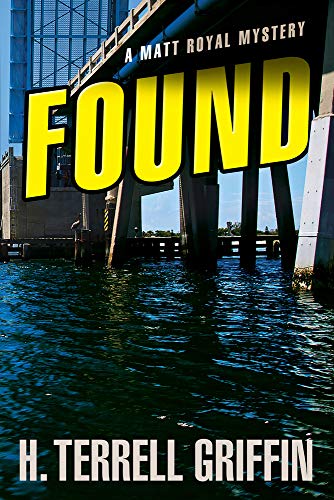 How does the reappearance of a woman presumed dead, an elderly veteran getting gunned down, and a sunken World War II German spy sub tie into the same mystery? Leave it to Florida author H. Terrell Griffin, who crafts this into a compelling mystery in Found.

The novel is the eighth in his Matt Royal mystery series set along Southwest Florida’s Longboat Key. His descriptions of the tourist town and how it retains much of its Old Florida charm, such as still having cozy establishments like the Seafood Shack and the Bridgetender instead of four-star restaurants for rich patrons, makes readers feel like taking a joyride to this sunny coast.

Indeed, retired attorney Royal and his “honey” Detective J. D. Duncan are enjoying their time, taking jogs along the beach, and boating in the Gulf of Mexico when people start getting popped off in disturbingly high numbers. It starts with a World War II veteran getting assassinated in broad daylight and the shooter driving his Jaguar off the drawbridge during his ill-fated escape. Duncan struggles to identify the shooter and is puzzled by the coded messages on papers in his car. It’s not clear what poor Kenneth Goodlow did to become a target, but Royal and Duncan quickly realize that his old friends from the nearby fishing village of Cortez are in danger.

Meanwhile, Duncan got a text message with a recent photo of former college roommate Katie Fredrickson, whom she thought was murdered over a year ago. The woman and her husband, a wealthy lawyer, were apparently both killed in their home. His body was found and hers wasn’t, but police said so much of her blood was spilled at the scene that she couldn’t have survived. Something clearly doesn’t add up. Fredrickson doesn’t make herself easy to find, but she drops Duncan some clues, including one that points to an old submarine.

The German U-boat really was sunk in the Gulf of Mexico in 1942 after blowing up some American vessels. Author Griffin takes a few creative liberties with the story, such as making the mission about landing a soldier with royal blood on American soil to deliver a secret message to a German spy ring. This soldier is the only survivor of the sinking sub and he arrives in Florida.

Mr. Griffin finds a cleaver way to tie all of this together as Royal, Duncan and their secret ops tough guy friend Jock Algren dodge bullets. There’s also plenty of interrogation, with a contrast between Duncan’s cerebral methods and the hardnosed Royal/Algren team turning arrogant crime bosses into blubbering wimps.

Case in point, Algren holds a blowtorch near a drug boss’ crouch and warns him, “Burning your nuts off isn’t going to get me anywhere. So let’s make a deal. You tell me the truth, and I’ll let you keep your equipment.”

That’s a hard offer to refuse.

The combination of detective work and rouge agents makes for a fun romp. The ending is satisfying on many levels, although it lacks a standoff between our heroes and the main villains that could have added an exclamation point to the story.

The identity of the gangster behind all the mayhem is revealed, but the reader doesn’t get to witness this person’s reaction when they’re exposed and brought down, which would have been a nice payoff.

More importantly though, the key characters grow and strengthen their relationships with each title. There’s plenty of life left in this series, even if the residents of Longboat Key are checking out a little early.