The Fortunes and Vicissitudes of Stern Whitman 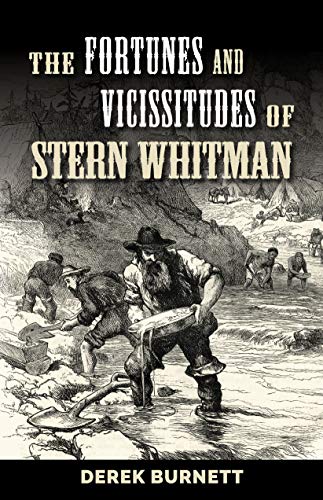 “an engaging story, full of wit, more than an occasional tongue-in-cheek statement, and a great deal of fact.”

With his brother, Johnny, Stern Whitman is prospecting for gold in the Sierra Nevada. He’s discovered a vein so large that he’s planning on giving Johnny their original claim and filing ownership of the other under his own name. Before that can happen, however, a fellow miner is killed and hostilities erupt concerning the two men accused of the crime.

Stern is one of the men chosen to go to Placerville and bring back a judge to preside over the inquest.

Leaving Johnny behind to guard their claims, Stern exits the camp, accompanied by fellow prospector, Stormy Isaac Ford, a known teller of tall tales and a liar.

“I will not stand here and tell you that I found Ford to be the dullest-witted of the lot—but I couldn’t recall any that surpassed him in that line, either.”

Also tagging along is Honey, one of the two Blackfeet women who do laundry for the men. It isn’t long before Stern realizes Honey has several ulterior motives for joining them and one of those motives is himself.

Stern is rather confused in his feelings for Honey.

“I wanted her, yes, but not in the simple traditional way. No, I wanted her in the way a man stands before God and declares for a woman. Why, I actually dreamed of bringing her home to Mama.”

While he’s trying to sort out his feelings, he also discovers some rocks that look to be a vein of silver. Having a gold mine plus a silver mine will give Stern enough money to take care of himself, Johnny, and his Mama for the rest of their lives. Now, he has a third reason to get to Placerville.

They rescue pick the Reverend Philemon Gray and his wife, Clarissa, missionaries who’d left the camp and shortly afterward were attacked by a family of Diggers.

“‘I believe you’re mistaken there, Gray,’ I interrupted. ‘What you want for this story is Paiutes.’

‘No Whitman,’ says Gray, rather coldly. ‘I know my Indians and these were Diggers. It will be a sorry day indeed when I mistake a Paiute for a Digger.’”

Clarissa is so traumatized she doesn’t speak for days. Gray, on the other hand, is loquacious and as greedy as all get out. He’s also more than a little crazy, and is prepared to shoot Stern and anyone else available for the silver claim.

Eventually, with the aid of a shyster lawyer who’s more famous as a gunslinger, Gray wrests the entire claim from Stern.

Arriving in Placerville, they find the judge and make arrangements to return to the camp and that’s when Stern learns the other reason Honey came along: to rescue her son from the father who took him away from her.

“It was disgusting and misplaced and absurd, and it threatened sorely to wreck my reputation for decency and sobriety of mind.” But it’s love, and ofttimes, a man only gets once chance at the real thing.

Now, it’s a choice. Will Stern go back to the one claim he still has and forget Honey? Will he “forcibly persuade a man to dismiss capital charges against the woman he loves?” Or will he give up everything to free Honey so he can realize his dream of seeing his mother and his wife “sitting on the steps hulling beans while our little half-breed youngsters turn somersaults in the grass?”

The first thing one should do when reading this story is look up the meaning of “vicissitudes.” There are many definitions but all point to nearly the same thing—change; transformation—and Stern does change for the better on the journey to Placerville and back. He may not come out of this as rich as he does when he went in, but he gains something a great deal more precious in the bargain.

Stern Whitman’s story is presented as a first-person narrative, with a brief synopsis at the beginning of each chapter, telling the reader what to expect, as was often done in early novels. This adds to the charm and historicity of the story, told from the distance of many years later when Stern, now a lawyer and novelist, is setting down the tale for his readers.

It's an engaging story, full of wit, more than an occasional tongue-in-cheek statement, and a great deal of fact.

It would be a great pleasure if author Burnett would allow Mr. Whitman to give us some more of his “vicissitudes” in another book, such as how he, Honey, and Johnny got from Nevada back home to Missouri.