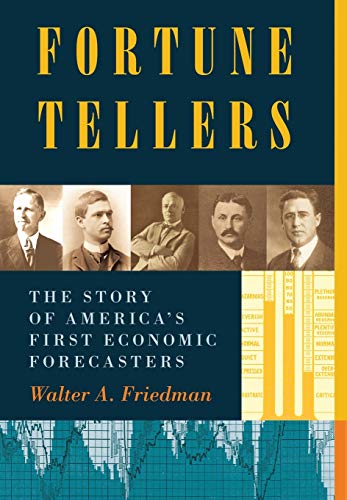 Fortune telling is a popular, if risky, pastime—nowhere more so than among market and economic forecasters. There is in that fact an irony: That economics and finance, disciplines shaped by the belief in rational causality, put such great store in foreseeing a future that does not yet exist and that has generally proven to be resistant to prediction.

Today, many of these names are at best only vaguely familiar. Babson’s profits from forecasting helped finance the current Babson College; Fisher was a much-celebrated economist at Yale University; Moody was the eponymous founder of the giant credit rating company; Hoover, of course, was the former president and once the technocrats’ technocrat.

Each of these figures claimed to be driven by scientific impulses. But the efforts of all of them depended on a kind of unspoken determinism: that knowledge of the past—specifically a past that could be counted and weighed—allowed them to see the future. This was far more problematical than any of them would admit. It remains so.

Dr. Friedman, a historian at Harvard Business School, follows the path here of another HBS historian, the late Thomas McCraw, whose books—on regulation, on economist Joseph Schumpeter and on the early Treasury secretaries—explore their topics through close examination of their animating personalities. Fortune Tellers boasts many of the strengths of McCraw’s profile approach and a few of the weaknesses.

The chain of portraits here is fascinating, as Friedman sketches out the lives of these often eccentric, occasionally brilliant, entrepreneurs and thinkers. To a man (and they are all men), their lives traced similar arcs: Great success—commercial, academic, intellectual—resulting in hubris, overreach, and eventual failure. As a group they emerged before World War I, experienced their greatest success in the financial euphoria of the 1920s, only to founder on those twin cataclysms, the Crash of 1929 and the Great Depression.

Only Babson managed to survive the crash with his reputation intact; unlike the others, he predicted a market break. But as Mr. Friedman notes, Babson’s strategy was mechanically contrarian: “Because he tended to call for ‘depression’ in good times and ‘improvement’ in bad times, he had begun predicting an end to prosperity as early as 1926. But the economy only continued to boom.”

In fact, while Babson was a brilliant marketer of his own genius—he packaged his insights in complex “Babsoncharts,” which he sold by subscription—he never operated at the high level of Fisher, the depth (particularly in corporate matters) of Moody or the rigor of Persons and Bullock at the Harvard Economic Service. He also proved to be, like the rest of his forecasting colleagues, completely at sea in dealing with the long and mysterious depression. Chronic decline proved opaque to a group with a bias toward the upside.

Friedman nudges his story forward by moving from portrait to portrait. But like McCraw, one sometimes wishes he would provide a little more connective tissue. A few questions nag, which he deals with sketchily. Why were all these men Americans? Why did the forecasting field emerge when it did? What was happening in the developing audience for forecasting—its end market—that produced such demand for these services?

And despite a brief chapter at the end, “Visions of the Future,” what do these men say to our current situation, when forecasting—having just missed another massive bubble—is so much bigger a business than in the 1920s, and so much were deeply interwoven in our views of the markets?

By the end of the 1930s, the original forecasting impulse was in tatters. The economy was still on its back and Wall Street was in disgrace. Technocrats, including Hoover, generally were in disrepute—despite the fact that the New Deal flooded Washington, DC, with experts.

In fact, this first generation of forecasters left behind enough of a platform that a new marriage of economics and data collection could emerge: econometrics, pioneered by Simon Kuznets, with his National Income Estimates, and Jan Tinbergen, with Alfred Cowles supporting new research, and Keynesian macroeconomics providing demand. As Friedman notes, econometrics began as a vast data collection effort that, in its second generation, turned to forecasting. The dream reemerges.

Fortune Tellers thus leaves us with a truth. In the markets, it can be a big problem to claim prophethood then whiff as the next bubble bobs past. But the appetite for news of the future, particularly in market economies, is insatiable. (So is credulity.)

That hunger makes it easy to forget, to see simplicity where tangled complexity lurks, and to move on to the next silver-tongued, high-gloss seer with the beguiling methodology after the previous god has crashed and burned.

How good were the early forecasters? Friedman summarizes later research into their predictions from the University of Chicago’s Garfield Cox. The results are mildly surprising. Babson, the most hucksterish of the lot, was also the most reliable, though all produced results that were, Cox concluded, better than guessing, unless, presumably, you’re a believer in the random walk. You could just imagine the Google ad: BIG DATA. BETTER THAN GUESSING.