Fortune Favors the Dead: A Novel 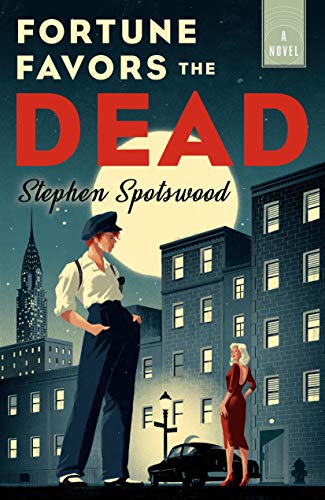 “With the tone and style of an old-fashioned murder noir, written from the female point of view, Fortune Favors the Dead is the beginning of a stellar period piece in a hard-boiled fiction series.”

Twenty-year-old circus roustabout Willowjean Parker is moonlighting as a security guard the night she meets Lillian Pentecost. That meeting changes her life. “The first time I met Lillian Pentecost, I nearly caved her skull in with a piece of lead pipe.”

Luckily she doesn’t, because before the night is over, she’s been hired by the woman who has the distinction of being a female private investigator in World War II’s New York City. Lillian is suffering from multiple sclerosis and needs an assistant who will be able to continue an investigation when she herself is unable.

“‘Hearing about your particular set of skills and your capacity to learn, I think you might be exactly who I’m looking for.’”

“Will” as she’s known, is soon learning more than investigating as she’s sent to lectures and classes to hear about things Lillian insists will eventually come in handy. So Will goes, and learns, and she’s on her way to become a private eye in her own right.

Then comes the Collins case.

Shortly after the end of the war, the widow of the owner of Collins Steelworks dies, and Lillian is hired by Rebecca and Randolph Collins, twin children of the deceased.

At first, things seem to be going well for the Collins clan—the Steelworks had won a government contract to build military machine parts. Then, Alistair Collins, owner of the company, shoots himself in his home study. A year later, his wife dies when that same study burns, the door locked from the inside. Abigail Collins didn’t die from the fire, however. She was bludgeoned to death.

The police report states that Abigail was at her annual Halloween party when she died. As surprise entertainment, she’d invited medium Ariel Belestrade to give a séance, at which she was “supposed to tell fortunes, read tarot cards, and speak with the dead.”

Apparently Belestrade speaks too much for the dead. After she delivers a cryptic message from Alistair to daughter Rebecca, Abigail calls off the entertainment and hustles everyone back to the party. A short time later, she’s found dead in the locked room.

The investigation shows there’s not much known about Abigail before she came to work for Collins Steelworks then married the boss. A great deal of delving takes Lillian outside the city and into a small upstate town where it’s revealed that even in her hometown, Abigail left a trail of heartbreak and tragedy in her wake.

A background check reveals Belestrade and Abigail’s association is a long-reaching one, going back to the days before Abigail left her home and came to the city.

Belestrade is also being patronized by Olivia Waterhouse, a professor writing a book on the occult featuring the medium prominently. Waterhouse was at the party, too, and tries to insinuate herself into the investigation and include it in her book, though Lillian deftly rebuffs her participation.

The case becomes a spiral of contradiction and confusion, with a mixture of uncaring cruelty and violence. With Will’s help, Lillian will find it one she may not be able to solve, for just as she’s homing in on Ariel Belestrade as suspect number one, the medium is also murdered.

Now Lillian must start over, for the reasons behind the deaths may reach further into the past, back to the case she was working on when she and Will met, its tentacles drawing in and involving various members of the present case.

Told as a reminiscence by Will, this story of a consulting detective and her assistant has been likened to the adventures of Nero Wolfe and Archie Goodwin. There is indeed, a marked similarity, both in the style of narration and time of the setting as well as in the characters themselves, in spite of the change in gender.

The story is easily read and fluidly told, with enlightening flashbacks provided from time to time by Will, who puts her own sharp-tongued dialogue, frank ironic humor, and insight into the story as well.

The official investigators are represented by Lieutenant Nathan Lazenby. Generally on Lillian’s side in a case, he’s been known to look the other way, but he can also look back just as quickly if he thinks Will or Lillian are bending the law a little too far.

As for Olivia Waterhouse, there are hints she may be the Moriarty to Lillian’s Sherlock. Largely seen as a minor character, the professor proves to the detective’s match in wit and daring.

With the tone and style of an old-fashioned murder noir, written from the female point of view, Fortune Favors the Dead is the beginning of a stellar period piece in a hard-boiled fiction series.