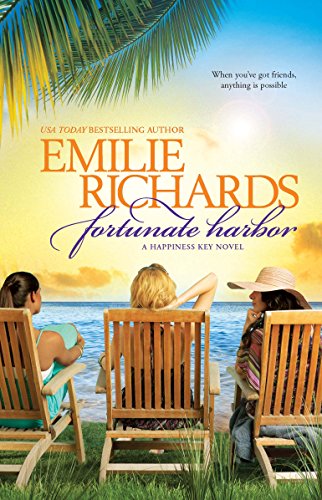 Tracy Deloche “inherits” Happiness Key, a rundown development on Florida’s Gulf Coast after her scoundrel husband, CJ goes to prison for fraud. Now landlady of four shabby cottages, Tracy has settled into her new life. She also lands a job at the town’s recreation center.

Then she starts dating attorney Marsh Egan—who was first her enemy when she originally planned to develop her property, and he battled to save it as a nature preserve. Through their clashes, they become close and are settling into a relationship when CJ is released from prison on a technicality and shows up on her doorstep. Though CJ tries to woo Tracy back, she refuses to trust him. To complicate matters, Marsh’s ex shows up, staking her claim to him and to the son she had abandoned years before.

Tracy’s tenant, Janya Kapur, a young Indian woman in an arranged marriage desperately wants to have a child. After several months of marriage, she realizes she loves husband Rishi and wants to start a family, though that may not be in the cards. Janya’s estranged mother calls and berates her for not being pregnant, which adds to her insecurities, and when Rishi starts returning home very late and avoiding her, she wonders if her marriage and life are doomed.

Fifty-something tenant, Wanda Gray, who has waitressed at the Dancing Shrimp restaurant for years, is suddenly tossed out of her job when the new owner decides to change the focus of the business and claims she is too old for his intended clientele. Angry, Wanda decides she will not let this get her down. Her cop husband, Ken, wants her to stay home and relax, but she decides to start a business baking pies, which is her passion.

Senior citizen Alice Brooks has finally settled into a contented lifestyle raising her granddaughter Olivia, after her sleazy son-in-law tries to claim she has dementia so he can gain possession of her money. When his plan backfires, he earns a jail sentence and loses his daughter, giving Alice a reason to live.

Dana Turner moves to town with daughter, Lizzie, and waitresses at the Dancing Shrimp with Wanda. Wanda suggests that Tracy rent the last empty cottage to Dana and Lizzie. Though Dana is reticent and does not socialize with the neighbors, Lizzie and Olivia hit it off, becoming instant friends. Enraged when Wanda is fired, Dana quits the restaurant to manage Wanda’s pie shop.

The plot thickens as CJ skulks around the development, trying to convince Tracy to rehab the cottages and build others, but Tracy is suspicious of his motives. The women also suspect Dana is not who she claims to be. Their sleuthing reveals that the real Dana and Elizabeth Turner are dead. Before long the truth about CJ’s actions and Dana and Lizzie’s alias is revealed, surprising the neighbors.

Fortunate Harbor, the second in the Happiness Key series is as enthralling as the first. The camaraderie between characters is touching, showing that age, ethnicity, or social status have no boundaries when it comes to friendship. A heartwarming novel, Ms. Richards again proves she can touch her readers’ hearts.