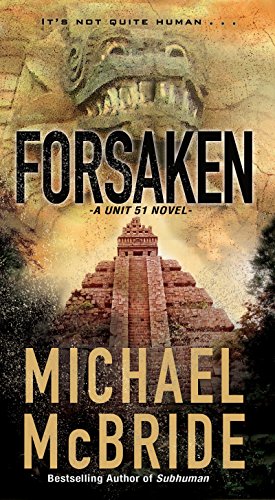 “a breathless, oxygen-deprived framework intensifying the terror of the written word”

It’s months after the unbelievable events happening at Analysis Station 51 on Queen Maud Island, Antartica, and the people involved have gotten as far from the South Pole as possible.

Dr. Cade Evans and Anya Fleming are in Teotihuacan investigating a tunnel reaching from the gates of the city to the Pyramid of the Moon, also aligning with the Pyramid of the Sun and the Temple of Quetzacoatl in the same pattern as three stars in Orion’s Belt.

Kelly Nolan and Martin Roche are in Salisbury, England, putting to the test a theory that crop circles are placed in areas above which aquifers exist.

In Musari, Nigeria, Dr. Jade Liang stumbles upon a humanoid creature who speaks to her, “Release us,” before throwing itself into a crocodile-filled river.

All five are immersing themselves in work designed to make them forget the events of the preceding months that left so many people dead, transformed Dr. Dale Hubley into other than human, and has Hollis Richards, still listed as missing, though there’s evidence he is somehow surviving on the island’s snow-covered surface.

At the Antartica location designated “Atlantis,” Director Cameron Barnett and Dr. Theresa Clarke attempt to communicate with the caged creature once Dale Hubley, now classified as Subject Z, only to discover they’re being subtly manipulated by a being more intelligent than they expected, one of a species “able to survive being frozen in solid ice for millennia.”

“None of you will survive,” it tells them.

At Teotihucan, a cache of bodies is discovered, voluntary sacrifices to Quetzalcoatl the feathered serpent, but the killings were carried out far underground where no one would be witness them and without the usual pageantry such offerings were given.

“The serpent god will consume you all,” Subject Z has said.

It isn’t long before everyone meets in Teotihuacan and none are too happy about the reunion.

“Someone is sending them messages. It couldn’t be coincidence that Dr. Liang was the recipient of one causing her to head to Mexico where two of the only people on the planet who would understand happened to be excavating the site to which Subject Z had drawn a map.”

There are too many mysteries surrounding the findings in the subterranean tunnels, too many hints that whatever happened there is somehow related to the horrors they witness in Antarctica. Is there enough humanity existing inside Subject Z to reveal the creatures’ agenda? Can Hollis Richards survive Antartica’s subzero temperatures and warn his team?

When those at Teotihuacan are pursued through the pyramid’s water-filled tunnels by an armed band of unknown assailants, a new factor enters the picture—a group of unnamed worshippers, determined to obtain the mummified body discovered in a crypt. At the same time, their counterparts in Antartica are again under attack by Subject Z’s hybrid brethren.

“Barnette stared at the images beneath the ground at the foot of the Temple. Suddenly, everything made sense. The pattern Subject Z drew in blood on the cage window. The design of the crop circle in England. The subterranean imaging of the maze beneath the temple. All the pieces fell into place and led him to an overwhelming realization: They were too late.”

This novel is so action-packed that a proper summary would invariably fill more space than currently allowed for this review. The entire story takes place in six days but the swiftness with which the plot moves makes it seem to happen in only a few hours.

If isolation and cold were the key factors in setting the stage in Subhuman, the initial novel, this entry in the series uses the claustrophobic environment of the underground, namely water-filled tunnels and subterranean excavations, evoking the similar sensation of a struggle for life while being carried on beneath tons of earth and stone.

Once again, those involved are in remote locations, the soil above them a barrier to calls for help. They have to rely on their own wits, faith in their companions, and a great deal of luck to see them through. The description of the pursuit through the tunnels, with their video game-like traps of dart-filled corridors, sliding doors, and hidden passages—all underwater—conveys to the reader a breathless, oxygen-deprived framework intensifying the terror of the written word.

There’s a bit of location-hopping in the beginning, to set the stage as the participants attempt to lose themselves in more or less “normal” locales. This may cause a momentary confusion to the reader but once the story centers into the discoveries in Mexico and corresponding events in Antartica, the narration settles into a single state of immediate danger for any and all.

Devoting chapters to specific individuals and their viewpoints makes what happens more intense and underscores the shock of their reactions. Author McBride has a way with creating characters, even minor ones. Several who are introduced and immediately dispatched are of such interest their brief appearance will make the reader wish they could’ve survived to return in Book 3.

That, incidentally, is a series entry eagerly awaited.