The Forgotten Waltz: A Novel 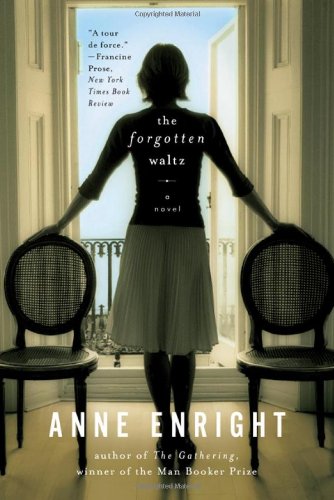 “Anne Enright’s razor-sharp writing turns every ordinary detail into a weapon, to create a story that cuts right to the bone.”

There are said to be Chinese artists who can etch pretty little pictures on the surface of a grain of rice—scenes that, with the help of a magnifying glass, are revealed in elaborate detail.

Anne Enright’s latest book, The Forgotten Waltz, evokes the same kind of wonder, with one significant difference: The scenes the author so delicately sketches are dark dramas of domestic dysfunction. In this case, Ms. Enright has penned an emotional autopsy of an infidelity.

Gina Moynihan is a recently married working girl sliding past 30. She and her burly husband Conor buy a house and settle into domesticity. But there are clouds on the horizon. Gina resists her husband’s suggestion to throw away her birth control pills, and at various suburban gatherings she tends to lurk on the edges, making snarky internal comments about the middle-class mothers slovenly put together, their sticky chaotic children, and the un-neighborly one-upmanship about jobs, cars, and houses.

It’s strange, then, that Gina tumbles helplessly in love with a conventional married man. She and Sean—who lives down the road from her sister’s perfect house—become “besotted fuck-witted strangers,” at least while the affair remains secret.

Gina waves away her bad behavior by evoking the usual lofty suspect: True love. (“my Sean, my downfall, my destiny.”) But it’s not only the cuckolded spouses in danger of broken hearts and broken lives. There’s also Sean’s daughter, nine-year-old Evie, a sensitive, otherworldly creature who witnessed the lovers’ first real kiss.

If this ugly adulterous progression sounds familiar, it very much is. For Gina and Sean’s “destined” love—though unique in its particulars—is just another case of a garden-variety infidelity. That’s the point: This affair, which starts with a few secret looks, progresses into a clandestine kiss, then blossoms in the workplace to jerk, in fits-and-starts, into a full-blown affair is distinctive in its details but achingly universal in its effects.

It’s the brassy, unwavering attention to those effects that make painful reading for the latter half of the book. The less-than-sympathetic Gina, standing in the eye of the devastation, feels as if their infidelity alone pulled “the houses down around us; the townhouse and the cottage and the semi-d. All those mortgages.”

Worse, the fey young Evie is caught up in the dislocation, clearly misunderstood by both her parents and the supremely awkward proto-stepmother who is Gina.

It’s an old tale, told with grim and unflinching honesty. That is this author’s singular talent. Anne Enright’s razor-sharp writing turns every ordinary detail into a weapon, to create a story that cuts right to the bone.