The Forgotten Founding Father: Noah Webster's Obsession and the Creation of an American Culture 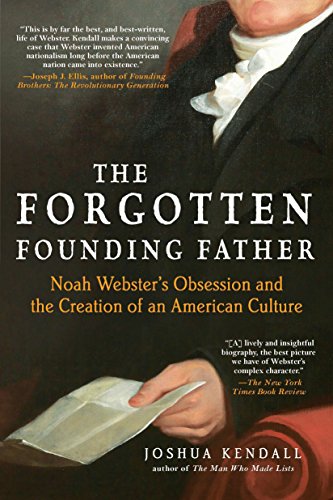 Here, at the beginning of the 21st century, Noah Webster is an often overlooked fixture of American culture to a modern audience. As a writer, budding statistician, and lexicographer—an intellectual desperate to claw his way to a secured and revered place in American history—Noah Webster worked to define and solidify a new Americana in the post-Revolutionary era.

Joshua Kendall’s historical portrait of Noah Webster, The Forgotten Founding Father, shows Webster’s conviction that America had to develop its own spelling, grammar, and literature as a source of cultural identity in order to shake of the shackles of British colonialism

Mr. Kendall’s story of Noah Webster ought to resonate strongly with modern audiences. He tells a tale of a brilliant and awkward student who worked to make his way in the world and leave his mark in American history amid a backdrop of rampant inflation, an insecure economy, and continual attempts to have his experiences and his education validated and legitimized. Modern audiences seeking to find a place—intellectual, cultural, or sociological—Mr. Kendall’s treatment of Webster’s story could be somewhat allegorical to those seeking to validate an identity.

Mr. Kendall’s history of the birth of America shows a tempestuous milieu of state, government, and the development of America post-Revolution. One can almost imagine Locke and Hobbs shaking their heads at the yet-to-be defined social contract of America. Rather than focusing on a strict history of political ideology and philosophy, Mr. Kendall’s The Forgotten Founding Father shows how the confusing—and often conflicting—implementation of political ideology and philosophy infused itself into the developing Americana.

Noah Webster published the first edition of his now-famous dictionary in 1828 as An American Dictionary of the English Language. Seeking to break with all things associated with and legitimized by Britain, Webster’s Dictionary and his “Blue Backed Speller” quickly became hallmarks—calling cards, if you will—of a developing classic American cultural system.

His attempt to write an “American encyclopedia” to teach geography to American students could be taken from just about any page of early- to mid-19th century European nationalism. Webster’s unabashed nationalistic agenda strove to create a common dialog and discourse that codified American learning: from spelling, to geography, to the very heart of lexigraphy. Interestingly, Webster’s interest to codifying a distinctly American English led to his support and proposal of early copyright bills; indeed, his unending lobbying and support toward a copyright bill that would carry authority throughout the entire nation, not just on a state to state basis.

Throughout The Forgotten Founding Father, Mr. Kendall relates interesting, humanizing stories of Noah Webster. For example, Webster and Benjamin Franklin weighed the value of actually creating new letters to add to the American English alphabet to decide whether or not there was merit in the idea of creating a new American English grammatical structure. Webster’s dictionary led to the uniquely American practice of spelling bees—the reader can almost envision Laura Ingalls Wilder with a Webster’s “Blue Backed Speller” trying to spell down the town in the iconic classic, The Long Winter.

However, Mr. Kendall’s history does more than simply arrange the cultural mystique of Noah Webster into a carefully arranged mythology of the Founding Fathers. Rather, his take on The Forgotten Founding Father is an attempt to liven up Webster’s place in American history with amusing anecdotes about Webster’s life–an attempt to humanize the stern federalist—through tales of choir practices, a love of dancing, and Webster’s long search for love.

Mr. Kendall reminds us that Webster traveled an widely in the early days of his career as he attempted to secure a steady source of income that he would use to pursue his research and writing projects. He also reminds us that an individual, such as Noah Webster, is built through and best understood through context. Understanding the context allows the reader to understand the individual and to understand the individual fairly, within history.

With current political interests in making sense of nationalism, the Constitution, and the early federalists, it is little wonder that a biography of Noah Webster would quickly find an audience. Mr. Kendall works to turn a resurrected enthusiasm for early American history into a story of an oft-overlooked Founding Father. This history gives the author behind Webster’s Dictionary character and a human voice.