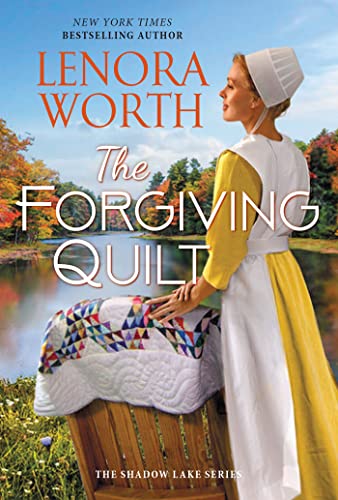 The Amish community of Shadow Lake, located near Lake Erie, Pennsylvania, is the setting for book #2 in the Shadow Lake series. When Eliza King breaks her leg after falling off a ladder in the barn, she is laid up for weeks. Wearing a cast and in constant pain, she is frustrated she isn't able to attend to her animals on the family farm. On a visit to her English doctor, she gets a recommendation for a young man in town who is an experienced farrier looking for part-time work. Jonah, Eliza's brother-in-law, handles most of duties, but he cannot manage everything  on his own, so Eliza and her mother agree to have this man come for an interview.

Though Eliza can no longer perform laborious tasks, she continues to visit her favorite horses, where she finds solitude and peace. Imagine her surprise when the man slotted to work for them is none other than Levi Lapp. She and Levi were close as teenagers and Eliza often wondered about a future with him, but one night at age 17, when Levi kissed her passionately, Eliza got caught up in the passion and was fearful they'd get carried away. She rushed home to report he had taken advantage of her, and not long after her frightening experience, he left town. Did he leave because of her? Did she tarnish his name? She doesn't know, but she surprisingly misses him, though she will never forgive him, believing he acted inappropriately.

Now, after several years, he's back. His father passed away and his mother is not well, so he has returned home to care for his family and their farm. When he spots Eliza in the barn, he is hesitant. She gasps and orders him to leave, but Jonah insists they give him a two-week trial and if things don't work out, he will go. He is experienced in caring for animals, and his help is greatly needed, so they can't turn him away.

Eliza wants no part of him and is distressed. She loves spending her time with her horses, but now she won't with him in attendance. She understands they need someone, but why does it have to be him? She is angry and frightened, but still, the sight of the handsome young man gets her heart racing.

Meanwhile, Levi is ashamed of his actions when he was young, but he was infatuated with Eliza, and upon seeing her now, he realizes those feelings never waned. While Eliza does her best to keep her distance from him, he knows he must apologize to her and set things straight. Even after all this time, he still is in love with her and wants to make up for his transgressions. As they are pulled together time and time again, the old spark rekindles.

Eliza's mind is in turmoil. She too, still has feelings for him, but how can this be? After he came on to her so eagerly, how can she feel desire for him? She confides in her two sisters and her mother; they insist she and Levi clear the air. Her mamm also recommends she design a quilt, which could work toward her forgiving him. Eliza dislikes quilting and would much rather spend time with her animals or reading in the apple orchard, but she agrees. Each of the squares she designs signifies moments Levi and she spend together as they work toward reconciling. And they both are surprised their old feelings are renewed.

Somewhat implausible these days is that a virtuous kiss between two teens would cause such hoopla, but the Amish are naïve and chaste, so in their upbringing, a kiss may be seen as forbidden. However, the way this is portrayed in this book is as though their kissing went much further, which is possibly an apt portrayal of how they are raised in this regard. Their principles seem heartening considering the ways of youngsters today who show little concern for propriety

Will Eliza forgive Levi, and can they reignite the feelings they once held? Eliza realizes she would like nothing more than to spend her life with Levi, but when his mother offers a confidential proposal to her, can she comply? And what if Levi finds out? Will he go along? As the two mend fences, Eliza hates keeping secrets from him, and if he knew, would he reject her after they've finally come to accept each other? Many questions are answered in The Forgiving Quilt.