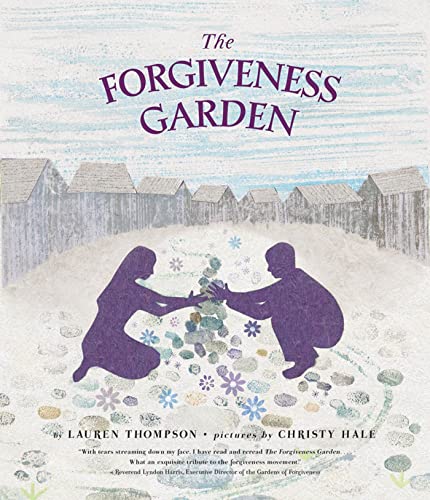 “There is no future without forgiveness,”Archbishop Desmond Tutu, a 1984 winner of the Nobel Peace Prize, has said. Yet people of all ages can find it difficult to shed grievances, choosing instead to burrow deeper into a cruel rut.

The Forgiveness Garden offers a simple parable that uncovers a possible path to conflict resolution. Two villages, Gamte and Vayam, are split by a river and by old, undefined grudges. As a new squabble concerning ownership erupts, the Gamte boy Karune throws a stone that strikes the Vayam girl named Sama.

As the people of Vayam plot revenge, the Gamtes focus on how to defend themselves. In the midst of this hostility, Sama happens to stop by a calm pool and notices her own ugly scowl. “How have I become?” she asks herself and begins to weep. Her perception sharpens further as she notices a group of scared-looking Gamte children across the stream.

This seemingly small spurt of empathy serves to inform her next action, which, in turn, ushers in an opportunity for the villagers to change their culture. In the midst of peer pressure to throw the same stone at Karune, Sama pauses to take in the villagers’ faces “hardened with anger and fear and hate.” And she refuses to participate in revenge.

“We must stop hurting and hating,” she says. “Let us build a garden instead.”

Instead of working against each other, the people of the valley begin to build a community. They still have doubts and questions, but now they have created a calm place in which to sit and discuss better ways to live together. When Karune steps forward to join Sama in the garden, readers will sense the possibility for change. Ms. Thompson ends with the image of the two sitting under a tree as they start to talk. “What,” the author asks, “do you think they said?”

Known for her gentle, child friendly picture books, Ms. Thompson notes that she gives her latest story’s protagonists names that relate to the Sanskrit words for forgiveness (Ksama) and kindness (Karumya). This, in addition to the vaguely situated setting evoked by Christy Hale’s stylized and timeless collage images, creates a sense of space and freedom that asks readers to make the story their own, to contemplate their own actions and consequences.

Tellingly, Ms. Hale’s colors evolve with the plot, beginning with harsh shades of clay, ash, and gray, and closing with a cool oasis of violet, blues and cool green.

The afterword notes this allegory was inspired by Alexandra Asseily’s actual Garden of Forgiveness in Beirut and an educational movement of the same name, founded by Lyndon Harris, the priest at St. Paul’s Chapel across from the World Trade Center.