The Forever Witness: How DNA and Genealogy Solved a Cold Case Double Murder 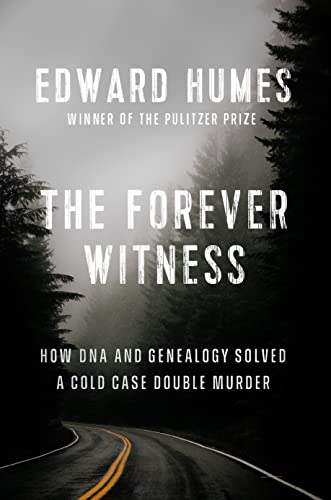 “Whether one is interested in cold case puzzles or genealogy, or just curious about solving crimes, The Forever Witness should be read and reread until it becomes a dog-eared part of one’s library.”

Everyone loves a puzzle. Even more we love a crime mystery puzzle; add to that concept a cold case mystery, and we have a story that we can’t put down.

And that is exactly what Edward Humes’ book, The Forever Witness is.

Humes takes this information and retraces the steps of the young couple through the eyes of Detective Jim Scharf of the Snohomish, Washington, police department. When Scharf receives this assignment, it looks to him like a long-term task with questionable results.

Humes moves the story through three parts: Part I, “We’ll Be Back Tomorrow Night,” traces the steps Tanya and Jay followed on their journey to Seattle, the various stops they made along the way, and the discoveries of their bodies.

In Part II, “Finders of Lost Souls,” Humes outlines how Det. Scharf is assigned the cold case file and the many challenges he faces while going through typical research efforts of the time in dealing with a 30-year-old unsolved case. In this part of the story, Scharf discovers how DNA might help in his search.

Here Humes lays out “three distinct phases in this golden age of using DNA to solve criminal cases . . . DNA fingerprinting . . . the age of the DNA database . . . and [finally] genetic genealogy . . .”

Clarifying this third step requires detailed research and, at times, curious explanation. And yet Humes takes on this challenge and brings understanding to the process—an understanding explained for the layperson in clear and concise minutiae.

Through Scharf’s eyes, we learn that it’s not the traditional DNA search that he encounters, it is this new process of genetic genealogy. Scharf meets genetic genealogist CeCe Moore, and within hours of her receipt of the 30-year-old DNA, she identifies the murderer.

Here Humes explains Moore’s acceptance of the importance of genetic genealogy. “Moore hadn’t anticipated the cushion of time and history to be stripped away and replaced by urgency, although it made perfect sense now that it happened—an inevitability, really. Genetic genealogy was the new tool in a police detective’s arsenal.”

Once the killer is identified and arrested, the story moves into issues one would not expect to be raised–specifically the concept of privacy. As the issue of genetic genealogy is used to solve this crime, many genealogists as well as genealogy databases maintained by organizations such as Ancestry.com and 23andMe.com question why the police are allowed to use DNA in this manner without the permission of those who have submitted their DNA simply to search for other relatives.

The question becomes should the police be allowed to use personal DNA to solve these cases or should each person who has submitted their DNA have the right of refusal?

In the case of Van Cuylenborg and Cook, the information gleaned from this process was taken to court where the accused was found guilty. (It should be noted that Humes further details that the guilty decree was overturned, but not because of the process; rather it was overturned because of one of the jurors. The accused is to have another trial, the date is yet to be determined.)

Since this case, genetic genealogy has been used in solving other cases, some cold, some current missing persons, so the question of privacy remains a challenge.

Humes provides deep backstory to his characters, at times deviating from the cold case being investigated, but the backstory is essential to solving the Van Cuylenborg and Cook murders. Without understanding the history of these individuals and the role each plays in moving forward, this would just be another creative nonfiction story. Instead, the reader gets to know everyone involved—the victims, the police, the genealogists, the families, and even the accused—and thus gets to take part in solving this cold case.

As the role of genetic genealogy is explained in fine detail, the question of privacy remains at the forefront of such investigation, yet as Hume explains, “Genetic genealogy is in the process of becoming a formalized discipline, one that can be taught in universities, with professional standards, guidelines, and licensing. In 2020 the University of New Haven became the first school to offer a graduate certificate in forensic genetic genealogy. Others will follow.”

Whether one is interested in cold case puzzles or genealogy, or just curious about solving crimes, The Forever Witness should be read and reread until it becomes a dog-eared part of one’s library.