Foreign Policy Begins at Home: The Case for Putting America's House in Order 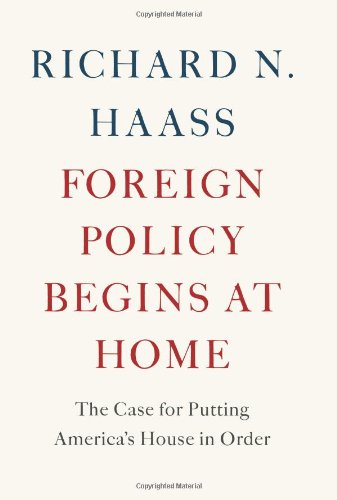 Urging the imperative “to distinguish between the desirable and the vital as well as between the feasible and the impossible,” Richard Haass forcefully, cogently, and compellingly makes the case that Foreign Policy Begins at Home.

Simply stated, why should anyone respect what the United States advocates when what it does at home is so antithetical to good government practice?

Here, one is reminded of the evocative lines of Jonathan Edwards’s “Sunshine,” the lament protesting taking directions from “some man’s gone, he tried to run my life . . . But he can’t even run his own life, I’ll be damned if he’ll run mine.”

Getting its home place in order, Robert Haass asserts, is the most effective way for the United States to exert leadership, for “no other country has the capacity, habits and willingness to take on this responsibility . . . The world will not sort itself out absent U.S. leadership,”

Organized in three sections—The Return of History, Restoration Abroad and Restoration at Home—this powerful presentation opens with a probing analysis “of widely diffused power and technology in a world lacking in mechanism for dealing with most of the challenges that already exist or soon will . . . an era in which it is often difficult to translate power into influence; and a time in which governments are finding it hard to manage at home and cooperate abroad.”

Skillfully connecting many disparate ideas and themes, Mr. Haass asserts that putting its house in order is a precondition for the country’s effective foreign policy. If this imperative is not addressed, the country shall be “in a position of high vulnerability to forces or actions beyond its control.”

Mr. Haass forcefully and persuasively proclaims “that U.S. foreign policy should focus not so much on what other countries are doing within their borders and more on what they do outside their borders.” Acknowledging, “this will be difficult at times as . . . standing aside will appear to be immoral or strategically short-sighted or both . . . the United States needs to balance its desire to do good with its ability to do good—as well as with the need to do many other things on behalf of its citizens at home and its interests abroad.”

In the second part of his book, the author argues “for the adoption of a new American foreign policy, one defined by doctrine that would bring to an end characterized by large land wars designed to refashion countries in the greater Middle East and replace it with an approach to the world that would place greater emphasis on the Asian-Pacific and Western hemisphere on instruments of state craft rather than the military and on shaping more how other governments act beyond their borders rather than within.”

Mr. Haass asserts, “The United States has jeopardized its ability to act effectively in the world because of runaway domestic spending, underinvestment in human and physical capital, an avoidable financial crisis, an unnecessarily slow recovery, a war in Iraq that was flawed from the outset and a war in Afghanistan that became flawed as its purpose evolved, recurring fiscal deficits, and deep political divisions.”

Examining the home situation more closely, he observes that “what makes the situation particularly worrisome are a large number of internal developments including a burgeoning deficit and debt, crumbling infrastructure, second-class schools, an outdated immigration system, and the prospect for a prolonged period of low economic growth.

“Many of the foundations of this country’s power are eroding; the effect, however, is not limited to a deteriorating transportation system or jobs that go unfilled or to a lack of qualified American workers. To the contrary, shortcomings here at home directly threaten America’s ability to project power and exert influence overseas, to compete in the global marketplace, to generate the resources needed to promote the full range of U.S interests abroad, and to set a compelling example that will influence the thinking and behavior of others.”

For too long, the U.S. government’s deficit spending delusion has been premised upon the continuing confidence of others to provide money at very low interest rates. These low rates make the current and prior deficits much more affordable than they would otherwise be—were higher rates to be charged. This spend-more-than-you-make policy is unsustainable. The consequences could be grim, were “the money markets to lose confidence in America’s ability to manage its own finances and start to exact a higher price for their continuing willingness to lend money.”

Notwithstanding his unsparing tough love assessment of the country’s challenges, Robert Haas perceives there is a valid, legitimate, needed role for the United States to exert global leadership. The “restoration of home” imperative involves addressing the deficit and the debt, energy, education, infrastructure, immigration, economic growth and politics.

All too many United States citizens observe their country’s foreign policy lacking a clear comprehension of the challenges. They recognize that things aren’t working the way they are supposed to yet lack clear comprehension of the appropriate strategic responses to and initiatives for perplexing challenges. Their expectations of the country’s leaders are reduced to the impotent frustration of the football coach in Any Bloody Sunday played so winningly by Al Pacino. When nothing seems to work and everything seems to go wrong, the coach cries out plaintively to his players looking to him for direction: “Just do something!”

If every voter, elected politician, and high government official were required to master Foreign Policy Begins at Home before they voted for a candidate, approved a policy, or advanced an initiative, the country’s circumstances—and therefore those of the world—would be so, so much better.

In such a circumstance, the Al Pacino coach character could exhort his players to “do the right thing that we have agreed upon.”