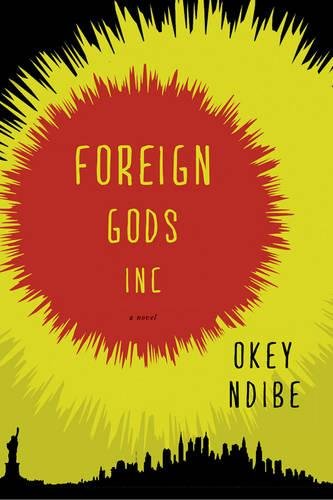 “Ndibe is a writer’s writer, and this book is a lesson in the art of the novel.”

Foreign Gods, Inc., the second novel by Nigerian author Okey Ndibe, is a gem of a book.

It’s the tale of an ordinary man with a far-fetched plan to strike it rich. He’s a New York cab driver, originally from Nigeria, named Ike (pronounced EE-kay). As the story opens, Ike has already made many bad decisions leading him deeply into debt; and the reader might think that his current scheme will similarly be a monumental, and perhaps slightly humorous, failure.

Why a failure? Ndibe sets the tone with irony that seems to foreshadow a messed-up outcome. The first irony lies with the title. What does it mean? It sounds like a graduate-school tome about colonialism—maybe about the godlike power of corporations in the third world. But no; Foreign Gods, Inc., is just a store— a Manhattan gallery that buys and sells statues of gods from exotic places—any gods currently in vogue among trendy multimillionaires. In this all-too-believable yet darkly humorous scenario, the most valuable gods are on the private second floor, called “Heaven.”

But now he can’t find a job in finance, partly, he’s told, because of his heavy accent. Thus begins Ike’s succession of bad decisions—the result of his naïve, indecisive, passive nature. He’s manipulated into marriage by a woman nicknamed Queen B who squanders all his money, sending him into debt.

How does he try to get out of debt? Gambling. Each time he loses, he’s sure next time will be the big win. And to bolster his optimism, Ike takes to excessive drinking—whiskey, Guinness, Red Stripe, and more.

The novel begins after Queen B has divorced Ike and left him hopelessly in debt. “The way she came after me, you would think I was a Manhattan millionaire.” An emotionally and financially battered Ike timidly enters Foreign Gods, Inc., and we learn the details of his scheme. He’ll return to his native village, steal the statue of the god Ngene, and sell it to Foreign Gods, Inc. for a million dollars or more. It’s a surprising plan, since Ike doesn’t seem dishonest enough—or skilled enough--to carry it out.

Even the way Ike thought up this caper is funny and ironic. It starts when his Sierra Leonean friend Jonathon Falla reads about Foreign Gods, Inc., in a magazine at the dentist’s office. Falla walks out with the magazine and mails it to Ike, explaining later why Ike must go through with his plan. Since Ngene is a war god, once Ike brings it to America:

“. . . it’ll enter the oppressive system and fight the power. Lead the revolution from the inside.”

“So you say. Great. Nobody ever sold me a shitty god . . . Every god I ever bought had the greatest mojo of all time. So what’s new?”

After that visit to the gallery, we follow Ike through his scheme: his preparation for the trip, the long and intense story of his return to his village of Utonki, and, finally, his return to New York and to Foreign Gods, Inc.

As Ndibe takes us through these developments, he gets an ever-firmer grip on us, pulling us more and more deeply into Ike’s world, into his dilemma. The author does this with a seemingly effortless use of literary skills, including flashback, vivid description, characterization, suspense, symbolism, side stories folded into the main story . . . take your pick. Ndibe is a writer’s writer, and this book is a lesson in the art of the novel.

Foreign Gods, Inc. becomes most powerful and Ndibe’s literary skills most evident as Ike returns to Nigeria to steal Ngene. From the time of Ike’s arrival, Ndibe introduces memorable characters, some humorous and some dramatically touching, such as corrupt customs officers; old friends of Ike’s; his impoverished mother and sister; his grandmother who is thought to be a witch; and his uncle Osuakwu, the head priest of Ngene. Ndibe also provides vivid descriptions of places (such as Lagos and Utonki) and states of mind (such as Ike’s anxiety).

One of the most dramatic parts of the novel is an inner story told as a flashback—the story of Christian missionary Walter Stanton who arrived in Utonki in 1898. A lengthy side tale, this story might at first make the reader impatient as it interrupts the main story. Yet the reader will soon be pulled into Stanton’s gripping tale—a story Ike had heard many times as a boy and had become obsessed with. Ndibe tells Stanton’s story in the style of a traditional African tale:

“Reverend Walter Stanton appeared in Utonki on a day the sun had cast its evil eye on the world, leaving every living thing in a state of stupor, groaning. He came with a retinue of soldiers whose guns spoke from two mouths at once . . .”

With their superior firepower, Stanton and his soldiers began to convert villagers to Christianity. Yet not all the villagers were persuaded. Stanton’s religion didn’t make sense to all of them:

“Does your god owe money to another god?”

Perplexed, Stanton asked, “What do you mean?”

“I still don’t understand why your god likes to be invisible. Around here, those who take to hiding are men who don’t wish to pay their debts.”

“An edge of exasperation nudged away Stanton’s eager mien. Fixing the interpreter with a glare, he spoke in a slow, halting manner . . .”

“Tell them to get it into their thick heads, once and for all, that there aren’t other gods besides the one we worship. Tell them our god can’t owe anybody because he owns everything in heaven and on earth . . . . Tell them that we’re all tainted sinners, corrupted by the original sin of our first parents, Adam and Eve . . . . Tell them, finally, that there will be no more questions for today.”

Yet perhaps Ndibe’s greatest talent lies in his descriptions of the depths of the tortured human psyche—such as Stanton’s descent into madness amid the dark African night. And—reader beware—Ndibe’s lengthy description of this psychological unraveling is powerful enough to churn your own inner demons. For example:

“Stanton felt himself tainted by the African night, smudged with Africa’s darkness. His mind, alert and rational in the day, strayed at night into superstition. He had wide-eyed dreams that teemed with chimeras, goblins, ghosts, and orgiastic spectacles. Africa inflicted him with insomnia. . . . It was as if some malevolent presences shared his hut. Other times, he felt that they owned the hut, with him a mere intruder.”

“He quivered over his health, which he felt failing, slipping. Gripped by foreboding, he was racked by a sense of death lurking.”

Stanton’s story is central to Foreign Gods, Inc. It stimulates thought and comparisons. Is Stanton any worse than Utonki’s present-day Christian minister, Reverend Uta? Uta is a sham, a swindler, out to get money from his followers, including Ike’s mother and sister. Stanton, as bad as he may have been, at least truly believed in what he was doing and sought no profit, even leaving his beloved wife and children.

And is Stanton’s god truly superior to Ngene, at least for the people of Utonki? Stanton rails about sin; but later in the story, followers of Ngene simply thank the morning spirit for protecting them and ask the same from the spirits of the afternoon and evening; they don’t worry about being inherently evil.

Then, later in the story, Ike himself begins to experience madness comparable to Stanton’s. Is that the fate of all who defy Ngene? The reader may even wonder: “Does Ngene really have spiritual powers.”

This complex story continues, with unpredictable twists, perplexing questions: Will Ike really steal the statue? Will he become wealthy as a result? Or will he become the new priest of Ngene, as is suggested in the story? Or even: Will all these things happen together?

Foreign Gods, Inc., tells a compelling story—rich, funny, ironic, tragic, complex, and extremely thought provoking. It’s a great book to read and discuss with a friend or with a book group because of all the questions it sparks.

For example: Which god was truly the foreign god? Did ____ symbolize Ike’s feelings of guilt? But, more simply, Foreign Gods, Inc. is just a wonderful read. On rare occasions, I say, “Phew,” as I read the final words of a novel, in awe of the amazing story the author has skillfully led me through. I definitely had that reaction at the end of Foreign Gods, Inc.

But returning to the book’s humor and irony, there was another reason to say “Phew” as the book ended—a reason you’ll learn when you read Foreign Gods, Inc.