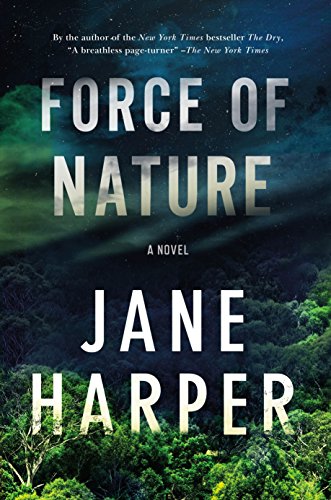 “a novel of friendships balanced with hate, set against the backdrop of a primitive landscape . . .”

A group from the BaileyTennants corporation go on an employee-employer team-building exercise into the Australian outback. One goes missing. Rangers and fellow employees search frantically, not only because no one should be lost in the Giralang Ranges but because that area was the site of a serial killer’s murders.

Though the killer is now dead, his son is still alive and may also be a threat. Australia Federal Agent Aaron Falk isn’t so much worried about whether there’s any danger from that direction. The missing woman, Alice Russell, is helping him in the government’s investigation of her employer. They need certain papers Alice was about to supply. The day Alice disappears, Falk receives a voice mail from her in the early hours of the morning, nothing recorded except two words:  “. . . hurt her . . .”

In a few hours, Falk and his partner, Carmen, will be assigned to assist the rangers in looking for Alice. Their purpose is twofold: Find Alice and get the promised papers, with the latter being paramount. Falk is familiar with the area, having grown up there and gone hiking with his father. He’s inundated with memories as, armed with maps Erik Falk made, he joins the search.

Their investigation will turn up more than what happened to Alice Russell.

“The four remaining women agreed on only two things. One: No one saw the bushland swallow up Alice Russell. And two: Alice had a mean streak so sharp it could cut you.”

As Falk delves into the background of each of the women accompanying Alice on the retreat, he’ll learn their secrets, finding each had a motive for hating Alice, some for workplace rivalries, others for hurts and slights suffered during schooldays. His investigation will reveal that the wilderness can bring out primal instincts in the most timorous, making the will to survive more deadly than the sharpest knife, and turning old hatred into weapons.

He’ll also discover a few truths about himself.

For those who like their suspense played out against the background of a vast uninhabited wilderness, with Man against Nature as well as against himself, Force of Nature will hit the spot. Its descriptions of the vast Giralang Ranges—probably hitherto unknown to most of the reading public—only hint at the loneliness awaiting those who dare hike there. Reading about the backbiting and face-to-face confrontations that occur may make the reader wonder how such an event could possibly build employee morale.

Though the investigation is told from Agent Falk’s point of view, readers are given few facts about Falk himself. At the beginning of Chapter One, they are simply dropped into the story when he is awakened by a call from his partner. Hints to something happening previously in which Falk’s hand is badly burned, are dropped here and there during the narration, as well as that the event somehow involved a friend. There’s no further explanation as to what or how the injury occurred, however.

This is the one deficit in the story, giving the reader no introduction to the main character or a chance to become familiar with him before being plunged into the story. Since this is the second novel in the series, this lack of information appears to suggest that anyone reading this story should’ve also read the initial one. In spite of his interaction with those at the search site and his partner, Falk himself is portrayed as a solitary figure, slightly removed and introspective. Most of the background deals with Falk’s estrangement from his now-deceased father and how the use of the maps and his return to the Giralang Ranges helps reconcile them even at this late date.

The mention of the serial killer’s continued protestations of innocence and the insertion of the threat of the serial killer’s son taking up his father’s cause seem to be merely a red herring, since it’s not really pursued even after bones are found near the cabin. Those facts merely set the stage for more tension, then are explained away in a few sentences later on.

There’s enough strife in the actual investigation, however, to make up for this, as told in flashbacks interposed between descriptions of Falk and Carmen’s interrogation of, and interaction with, the other party members and the investigation.

For those unfamiliar with Australia’s bushland, the portrayal of the Giralang ranges will give a sense of their haunting beauty tinged with the danger they represent. Force of Nature is a novel of friendships balanced with hate set against the backdrop of a primitive landscape that feeds the anger in those present. It’s a great read for those who like police procedurals with a less-than-usual setting.

Readers will want to seek out the first Aaron Falk novel, The Dry, and familiarize themselves with this character while they wait for the next novel to be released.