A Fool's Errand: Creating the National Museum of African American History and Culture during the Age of Bush, Obama, and Trump 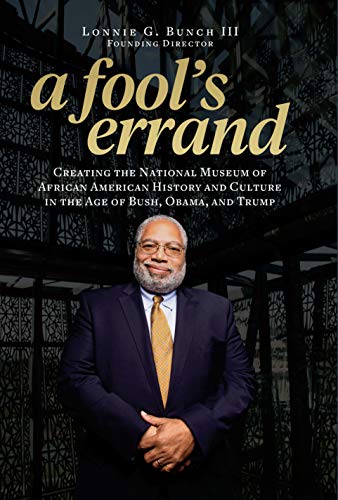 A Fool’s Errand by Lonnie Bunch III is a literary combo. It’s a book about a man, a building, and a race. This is a book that needed to be written. It documents how a dream eventually became reality.

The National Museum of African American History and Culture (NMAAHC) is a building that has its beginnings in the hopes and dreams of African American soldiers who had fought in the Civil War. Individuals who risked their lives to preserve the Union. Their contributions were overlooked for many years. Where were the monuments for their service?

By the 1920s a number of African American leaders and scholars began to advocate for a black presence on the National Mall. They felt this would be an important way of celebrating and acknowledging the black contributions to the making of America. The idea of a monument soon turned into the idea of a museum in 1966 when Congress created a commission to study the feasibility of establishing one. Nothing would actually happen until 2001 when legislation introduced by Representatives John Lewis and J. C. Watts Jr. created a 23-member Presidential Commission to evaluate and determine location and cost for a museum.

In A Fool’s Errand Bunch writes about how an idea was given flesh and bone structure. Bunch writes with candor, much humor and humility. He shares with the reader the tremendous task he agreed to undertake. The early chapters are filled with decisions of diplomacy and urgency. Bunch is a contemporary Noah having to decide how to get the ark not only off the ground but into the water. The major task is not selecting two of every animal but what should go into a museum.

How much attention should be given to slavery? How instructional should the museum be in helping all Americans become better citizens? How does one tell a story about a race of people as well as a nation? How can it be told in an engaging, interactive manner?

Bunch presents these questions alongside his personal story and his decision to leave the Chicago Historical Society and return to the Smithsonian (in 2005) where he once worked. The major challenge he faced was convincing people that he was not heading up a “project” but building a museum. Using technology Bunch was able to introduce the museum to the public by first building its online web presence.

His interest in storytelling is what makes his book enjoyable reading. When he describes meeting Mamie Till Mobley, the mother of the martyred Emmett Till, one understands how the museum must also be a place for memories. Till’s death is a metaphor when one tries to describe the struggle faced by African Americans.

Bunch’s professional work will also by the time the museum is built connect him to his own family history. He writes the following after an elderly woman gives him a photograph of his grandmother:

“I could not believe that I had a picture of Leanna. Who could have imagined that the photograph would survive for more than 100 years, only to be given to me because of the visibility that came from the opening of NMAAHC? I expected the museum to affect my career, but I did not conceive that it would lead to a sense of personal discovery that would increase my knowledge about my own family. Without the visibility that accompanied the opening, this wonderful image of my grandmother would have been lost to the family forever. I now realize that since its opening in 2016, the museum has also contributed to that sense of discovery and greater understanding of self to the millions who have visited it.”

Lonnie Bunch III is a master builder. His book is a blueprint as well as a memoir. Many people struggle to “dream” a world. Bunch tells the story of how to build a museum that in many ways today has become a world. This is a praise book. A tribute to the many individuals responsible for helping to construct the National Museum of African American History and Culture. Bunch walks among the saints and believers.

For the record it’s good that he writes about the meetings he had and the opposition he faced. He had to overcome “a fool’s errand,” the title of an 1879 book written by Albion W. Tourgee. Tourgee was a witness to the violence and intimidation that destroyed Reconstruction. Still he felt it was something that needed to be undertaken if America was to heal from its division.

What Lonnie Bunch III has given us is a “map” on how to reach future destinations located within dreams. Is it “foolish” to believe maybe he once thought building a museum was as difficult as walking on water?

Bunch ends his book by illustrating his knowledge and vision:

“Museums alone cannot ease the tensions that come from the debates surrounding the fluidity of national identity in the twenty-first century. Nor can any cultural institution solve the problems of poverty, racial injustice and police violence. But museums can contribute to understanding by creating spaces where debates are spirited but reasoned.”

There is still more work to do.