Fool Me Twice: A Novel 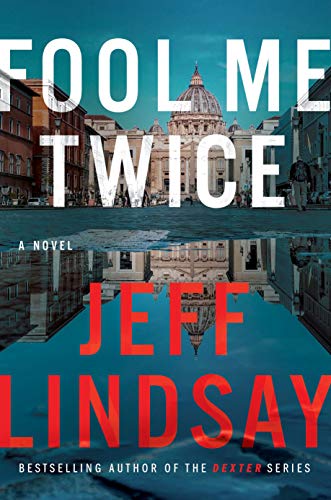 “Lindsay’s clear description of locations and people provides the reader with a sense of ‘being there’ and accepting these people as real.”

Riley Wolfe is not the typical hero-protagonist—he is a thief, the best at what he does; he’s a loner, and he is fabulously wealthy—so he really doesn’t need the money, but he does need the challenge. Riley’s Law: There’s always a way. Until . . .

. . . he is kidnapped by Patrick Boniface, the number one arms dealer in the world, a collector of fabulous art, and when he wants something, one does not say “no.” And Patrick wants a piece of art that is impossible to steal—a fresco that currently resides on a wall in the Vatican. Patrick is clear about his demand to Riley: get the fresco or die.

Enter Bailey Stone, the second biggest arms dealer in the world, aiming to be the first. He learns about Riley’s assignment, and demands Riley get him into Boniface’s fortress, or Riley’s love interest, Monique, will die. Of course, Riley will as well.

To sum up the storyline in a few short sentences, Riley explains the situation to himself: “’Well, Self, it’s like this,’” I said. ‘One badass wants me to do something impossible, or he’ll kill me. Another badass wants to help me do it so he can kill the first badass, and then probably kill me. And even if I do the impossible thing, which I can’t, one of the badasses will probably kill me anyway. Or best case, he’ll own me for the rest of my life.’” And the story unfolds from there. But, like Riley says, “There’s always a way.”

Lindsay has developed a character in Riley that one can’t help but cheer for when presented with the impossible. Riley brings Monique, an expert art forger, into the problem in spite of its improbability. He is designing a plan, but he can’t carry it off without Monique.

To add to the excitement, enter FBI agent Frank Delgado, whose main goal in life is to find, arrest, and incarcerate Riley Wolfe. The depth of the plot continues to grow, as every chapter introduces a new character who throws another wrench into the works.

For all the twists and turns in this story, Lindsay is to be complimented in his ability to keep moving the story along at a rapid pace while never deviating from the goal. It should also be noted that Lindsay is a master at foreshadowing and creating red herrings, not to confuse the reader as much as to send the characters in different directions while the reader watches from the sidelines.

Lindsay introduces new characters at the beginning of almost every chapter, and often when this happens, the story gets muddled and the reader has a difficult time following the storyline, and yet this does not happen with Fool Me Twice. The characters are real and most of them are not very nice, but they each have a goal to pursue and being nice isn’t necessarily how they will reach their goal.

The story is rife with violence and very blue language, and yet the reader gets beyond these things because the story is so intriguing, and the violence and language are just part of life.

Lindsay’s clear description of locations and people provides the reader with a sense of “being there” and accepting these people as real. His ability to write violent scenes makes one feel the punches, the bruises, and the breaks.

But the best part is how Lindsay provides a solution to an impossible situation, so the reader believes a fresco has been stolen from the Vatican, or has it?

It should be noted that Lindsay uses two points of view throughout the story. He hops from Riley’s first-person account of the events as they unfold, to the third-person POV to introduce each character and often throw in some foreshadowing and/or red herrings. Under normal circumstances, changing from first to third person would be distracting, but Lindsay handles it well, to the point where the reader might not even notice the changes. Certainly, this does not detract from the story.