Food & Freedom: How the Slow Food Movement Is Creating Change Around the World Through Gastronomy 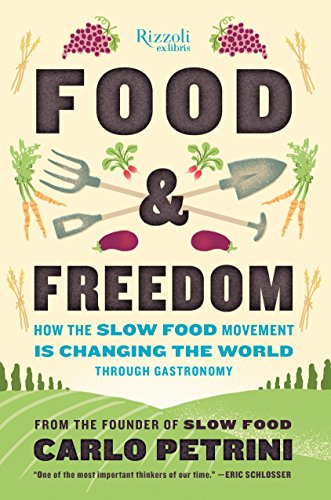 Carlo Petrini, the founder of Slow Food, the worldwide grassroots organization, and the author of Slow Food Nation, exudes so much joy, hope, and optimism in his new book that it’s hard not to be swept away by his impassioned arguments for social, political, and environmental justice.

An Italian with a boundless love of good food and red wine, and an abiding reverence for the earth and all its inhabitants, Petrini writes like an ancient Roman orator with an eye on the populace. The art of rhetoric isn’t far from his fingertips, much as a knife and fork always seem to be close at hand.

What Petrini wants is nothing short of total human liberation: the end of racism, sexism, colonialism, and every kind of bondage. The way to achieve that end, he insists, is by placing food—“gastronomy,” as he calls it—at the heart of a global movement that honors women, along with the young, the old, the forgotten, and the discarded.

His is an intriguing idea well worth considering, especially now in an era of global climate change and drought and with food security in jeopardy.

The American poet, novelist, and environmentalist Wendell Berry noted years ago that eating was an agricultural act. Now Petrini insists that eating is a revolutionary act. Indeed, he believes that once you persuade human beings to eat locally, slowly, and organically with respect for regional culinary traditions, farms and farmers then the big political agenda will fall into place.

Is he naïve? Yes, he is. Is he Pollyannaish? Yes, again. The Slow Food Movement hasn’t yet changed the world. Moreover, it might be too soon to say that it is changing the world.

It’s not that Petrini doesn’t see hunger, malnutrition, the terrible waste of food and in his view the obscenity of TV programs devoted to cooking. Indeed, he reminds readers again and again of all the problems that ought to be solved and that might be solved if only human beings worked together. But he doesn’t dwell on ills, perils, shameful habits, and social patterns.

In Food & Freedom, Petrini aims to inspire and to grow by leaps and bounds the ranks of the Slow Food movement that began in Italy in 1986, and spread rapidly to 150 countries around the world, with more than 100,000 current members. Again and again, he repeats his slogan, “Good, Clean, Fair.”

In an early chapter he explains that “good” means attention to pleasure, “clean” means sustainable and durable in all aspects of food from growing to eating, and that “fair” means without exploitation of agricultural workers. Fair, he argues, is harder to achieve than good and clean. Indeed, it is. Farm workers are often invisible, their plight ignored by foodies.

For much of the book, Petrini recounts his travels from his native Italy to Africa, Asia, Latin America, and the United States, the home of fast food, where he is surprised to find kindred spirits such as Alice Waters, the founder of Chez Panisse, the flagship Berkeley restaurant.

Food & Freedom isn’t as captivating a work, though Petrini’s accounts of his world travels bring diverse cultures and cuisines into sharp focus. Recipes might have added spice to his prose. And more information about his visits to the United States would have helped American readers see themselves and their place in a global movement.

The sections on Italian cooking and culture read like vivid travel writing. Petrini takes readers away from Rome, Florence, and Venice, and off-the-beaten track to Bra, his hometown in Piedmont. Wine flows, delicious food is consumed, and conversations sparkle. Close your eyes and you’re dining in Italy.

Members of Slow Food, U.S.A, will enjoy the snapshots that Petrini takes of himself and his friends. Others may well find that Food & Freedom provides a taste of Italy with its innovative chefs, hardy peasants, and crusty old gentlemen who detest fast food and defend the “right to pleasure.”

Thomas Jefferson, the author of the Declaration of Independence who urged “life, liberty and the pursuit of happiness” would understand. Indeed, to the basic rights outlined in the first ten Amendments to the Constitution, we might add the right to nourishing, nutritional, tasty food. Eat. Drink. Be Merry. And read!