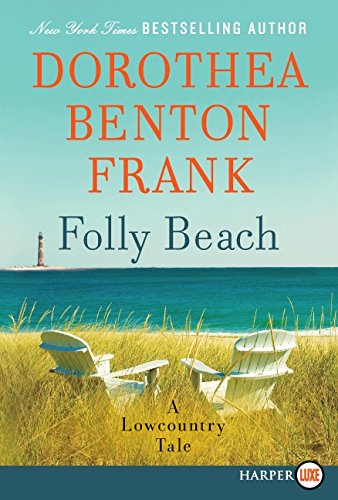 “Filled with whimsy and humor as well as grief and integral parts of history, Folly Beach offers up the sights, scents, tastes and textures of the locale in such a fully tangible manner that we feel like part of the story—the best reading experience we readers can have.”

After Cate Cooper’s husband commits suicide, Cate learns some devastating facts about the man she had been married to for 26 years. Destitute and losing practically everything but the shirt on her back, Cate agonizes over what is next.

Mother to Russ, and mother-in-law to Alice—an obnoxious therapist who sets Cate’s teeth on edge—Cate knows she cannot rely on her son for help. In addition, her daughter Sara is in California trying to find her own way. All Cate has left of her old life in New Jersey is her beloved sister, Patti, but Cate does not intend to mooch off her and her husband Mark.

Cate’s aunt Daisy, the woman who raised both her and Patti after they lost their parents at a young age, has broken her ankle. Though Daisy has the help of her partner Ella, Cate realizes both women are elderly and decides Folly Beach—the place of her roots—is where she will go to help her aunt and to decide what to do with the rest of her life.

When she arrives in town, Cate stops at the grocery store to get some supplies. She backs out of the lot, hitting another car. Devastated by everything from the past few weeks, she breaks down sobbing, much to the horror of the man in the other vehicle. Cate regains her composure, and while exchanging information, the man—a dashing college professor named John Risley, insists he is at fault and promises to pay her damages.

The saying “it’s a small world” is nowhere more evident than in this story, for both Daisy and Ella are very familiar with John. Much to Cate’s dismay, the two women resolve to get John and Cate together. Though recently widowed and penniless, Cate senses something about John Risley that sets her heart aflame, especially after enduring a long loveless marriage focused only on her husband.

Aunt Daisy owns several properties on Folly Beach and sets Cate up in the Porgy House—the home once inhabited by Dorothy and DuBose Heyward. DuBose, of refined southern stock wrote the book, Porgy in 1925, and his wife, encouraged him to market it as a play. Controversial subject matter during that era, the play became a hit on Broadway. However, when Gershwin later turned the play into an opera, using DuBose’s lyrics to the musics, it did not prove as successful, though Heyward soon became considered an authority on southern literature.

Folly’s Beach commences with the draft of a play about Dorothy and Dubose Heyward’s time spent on the island. Though somewhat disconcerting at first as to why and how this integrates with the rest of the story, it becomes evident as one digs deeper into the book. Every other chapter pertains to the Heywards as the reader, juxtaposed between Cate’s life and theirs, discovers that fate does play a part in this tale.

Dorothea Benton Frank is true to form in this new edition of her Low Country tales. Filled with whimsy and humor as well as grief and integral parts of history, Folly Beach offers up the sights, scents, tastes and textures of the locale in such a fully tangible manner that we feel like part of the story—the best reading experience we readers can have.