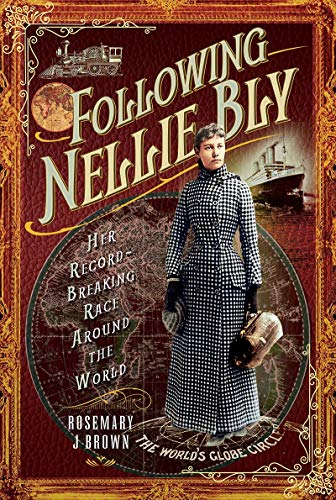 Adventurers, travelers, feminists, historians, journalists, and human rights advocates are among those who will take special delight in reading Rosemary Brown’s race around the world as she replicates the intrepid journalist Nellie Bly’s solo journey 125 years earlier.

Both Bly and Brown represent each of those categories of readers. Nellie Bly’s great claim to fame, prior to circling the world in an attempt to beat Phileas Fogg’s 80-day record, was her stunning underground reporting of the horrors of New York City’s insane asylum, for which she feigned madness during a tortuous ten day stay. Rosemary Brown is a journalist for newspapers in the UK, USA and France, a Fellow of the Royal Geographic Society, and an energetic human rights advocate.

“Like Nellie,” Brown writes in her opening chapter, “I like to set aside Sundays to pursue ideas for adventures.” She also reveres “Victorian female adventurers and how they defied convention despite society’s determination to shrink their horizons . . .” So one Sunday she “decided to put female explorers ‘back on the map.’” Thus began her goal to “revive a role model, an invincible woman who defied the status quo, walked on the wild side and explored the world without fear . . .” Although Brown’s is not a race around the world, it becomes a memorable adventure in which she draws ever closer to Nellie in spirit.

Born in 1864, Bly wrote for The New York World after getting her journalistic start in Pittsburgh and Mexico. In 1888 the paper agreed to her proposal to circle the globe faster than Jules Verne’s Fogg had done, which began with Nellie declaring that “If I could do it as quickly as Phileas Fogg, I should go.”

Setting off from Hoboken, New Jersey and returning to New Jersey successfully in 72 days after traveling more than 21,700 miles, she became known around the world for doing something thought impossible and improper for an unchaperoned woman. Sadly, after marrying a wealthy businessman who dies, his business in ruins, Bly died impoverished at the age of 57, but not before she had pioneered investigative journalism, paved the way for women in newsrooms, advocated for women, children, and the poor, and ridden horseback in the first Woman Suffrage Procession in 1913.

While Bly journeyed by ship and rail, Brown, who lives in the UK, flew around the globe, following in Bly’s footsteps for just over a month on an expedition registered with the Royal Geographical Society. In telling the story of Nellie’s journey and her own, Brown departs from London and weaves a wonderful tale of two spirited, capable, curious women, cut from the same cloth and connected to each other through time, travel and purpose on a trip that takes them to France (where Bly meets Jules Verne), Sri Lanka, Singapore, Hong Kong, China, Japan, and back to New York.

Brown’s descriptions of the places she visits are beautifully drawn. Here she describes a hotel in rural Japan: “With a symphony of pagoda roofs outside and heritage furnishings inside, the [hotel’s] exotic blend of east and west would have been familiar to Nellie. The guest rooms are set in lush gardens where pathways meander past stone-sculpted lions and temple lanterns, and down rock steps to ruby red bridges crossing rock-strewn pools. . . . Not far away, [the hotel’s] vine-cloaked waterfall spills into a natural basin where carp as large as your hand swim in circles. Inside, the dark wood-paneled lobby features a massive winding staircase carpeted in red.” Who wouldn’t want to travel halfway around the world to see that?

Nellie Bly returned from her adventure to official ceremonies and adoring crowds. Brown returned to explore Bly’s life journey a little further, first with friends and then with her husband who flew to New York from London to greet his wife and visit her final stops with her. Among these sites were the asylum where Nellie spent ten harrowing days, Woodlawn Cemetery in the Bronx, where Nellie lies in a pauper’s grave, and her childhood home in Apollo, Pennsylvania, where she is remembered annually on the Sunday closest to her May 5th birthday.

And so Rosemary Brown ends her trip where Nellie Bly started her life. Nellie and Rosemary have “shared a challenging, yet exhilarating, voyage around the world and across 125 years. What started out as Nellie Bly’s story is now part of my own,” Brown concludes. Reading Rosemary Brown’ carefully crafted, charming book, readers can now be armchair companions of two amazing women.