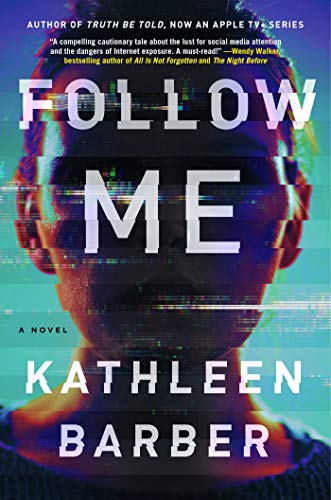 “feels like watching an automobile accident develop in slow motion and may serve as a cautionary tale for our times.”

Barber’s second novel juggles four different point of view characters to tell a disturbing story that becomes even more so because of her restraint, understatement, and occasional humor.

Audrey Miller is a narcissistic young woman with a degree in art history and nearly a million followers on Instagram. She shares meals, diets, clothing, furniture, shopping, and virtually everything else in her life. When her huge following lands her a job as a social media supervisor at a prestigious museum in Washington, D.C., she jumps at the chance even though it means leaving her beloved New York.

But Audrey doesn’t vet the apartment she rents online and finds herself stuck with an apathetic landlady and Ryan, a creepy grandson who lives above her basement digs. Ryan likes to sneak into her apartment and steal small items, and Audrey eventually adds more locks, which seem to do little good.

Things go downhill from there.

Audrey’s bedroom abuts an alley where various transactions take place and undesirables can look through her window. Weeks after moving, she has unpacked almost none of her belongings and overshares her experiences online.

A disturbed young man who discovers Audrey’s online persona sends a bug into her computer so he can watch and hear her entire life, and he begins commenting on her Instagram feed. Audrey realizes early on that he knows things she has not shared, and is upset enough to reconnect with Nick, an old boyfriend from college, with whom she parted less than amicably.

Audrey is the main point of view character, and her stalker, identified only as “Him,” is the second. This young man sounds like an online version of the character in John Fowles’ The Collector, and Barber makes him believable and terrifying because he’s so underplayed and committed to his adoration for the cute blonde he’s never really met. He lives in Washington, though, and sees Audrey’s move to his own hometown as a sign of her love.

The third POV character, “Cat,” or, as Audrey calls her, “Kitty-Cat,” was Audrey’s roommate in college. A bright introvert, Cat now struggles to advance in a prestigious Washington law firm. The first step would be joining the team on a huge lawsuit, but Audrey’s narcissistic neediness and increasing terror as her stalker reveals his proximity distract Cat more and more from her goals.

Cat introduces Audrey to Max, a safe new boyfriend, but secretly fears that Max will reveal a scandal in Cat’s own past, one that could ruin her friendship with Audrey, and, even worse, derail her still nascent legal career.

Barber uses the shifting POV to conceal information from her characters while revealing it to the reader, and her controlled pace increases everyone’s paranoia without resorting to melodrama or overdone pyrotechnics.

The supporting players flesh out the book well. Ryan, the creepy grandson; Nick, the old boyfriend; and Audrey’s co-workers at the museum add color and tonal variety. They move the story along and add depth without ever bogging things down.

Barber offers occasional flashes of dark humor, mostly through Audrey. The woman is maddeningly self-centered, but bright and creative and increasingly self-aware. Her artistic touches and gift for connecting with people—both in person and online—make her much more sympathetic than she might have been. Cat, Nick, and Max all have warmth and insights that offset their drive and darker moments, too. They hold our interest and keep our respect even when they make bad choices. Those choices stem from their own quirks rather than from being pawns in the plot—another plus.

The creepy mystery resolves logically but with some refreshing surprises, including an understated but disturbing denouement. The story feels like watching an automobile accident develop in slow motion and may serve as a cautionary tale for our times.