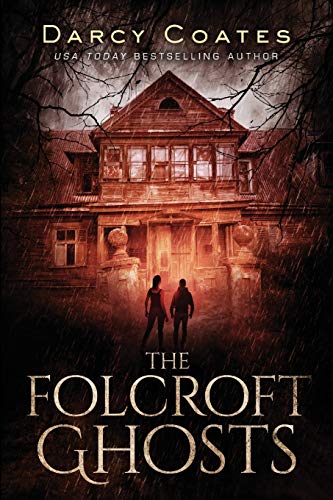 “Relying on atmosphere and suggestion rather than grimdark, author Darcy Coates offers a display of suspense and encroaching terror in the Folcroft Ghosts.”

Following their mother’s hospitalization after a car accident, Tara and Kyle Kendall are left alone. At first, they stay with a neighbor. Then, their grandparents call, offering the children a home until their mother recovers.

The two are surprised to hear from Peter and May Folcroft. Their mother never spoke of them, and they had no idea they lived so close by.

The Folcroft house is an ancient one, rather isolated. There’s no cell phone reception nor internet, though there is an ancient landline. May and Peter appear kind and overjoyed to finally meet their grandchildren, though young Kyle feels he’s seen Peter before.

He couldn’t have, could he?

Though the elderly couple do everything to make the children feel welcome—May cooks fabulous meals and treats, Peter takes them on excursions around the property—it isn’t long before odd things begin happening.

There a room upstairs that can’t be opened. May says the door is stuck. Tara thinks it’s locked.

What’s inside they shouldn’t see?

Both Tara and Kyle swear they’ve seen figures roaming the property—there one minute, gone the next.

In the woods, there’s a bunker, left over from the days of the war, May says. It’s airtight when shut, so the children are warned away.

Tara finds two graves in the woods. It’s Peter’s mother and father, May says, buried there so they’ll be close by, but the graves are untended and the path to them overgrown so no one has visited in a long time.

There’s a lake for swimming but neither Tara nor Kyle have any wish to after they learn Peter’s little sister drowned there, and her body was never recovered.

When a storm downs the telephone lines, May takes the children into town to use a phone there. She warns them not to speak to any of the townsfolk. Tara does, of course. While Kyle uses the library computer, she chats with the librarian and learns that people consider the Folcrofts odd and remote.

Small things, discrepancies in conversations, the feeling of isolation, and Kyle’s insistence he’s seen Peter before, all begin to come together suggesting their loving grandparents aren’t who they seem to be.

When Tara does a history check of the library computer and finds that someone has looked up how to dismantle telephone wires and how to disengage an automobile’s brake lines, she has a horrifying thought: What if their loving grandparents were the ones who caused their mother’s accident in order to gain custody of their grandchildren?

The other question: Why would they do such a thing?

The answer is a shocker and the reader may question Tara’s decision of what to do with the knowledge she learns.

This is a rather short novel but a definitely suspenseful one. Contrary to the way these stories usually run, Tara and Kyle are listened to by other adults instead of ignored because of their age.

The two are resourceful youngsters who manage to gather enough information to uncover a grisly secret May and Peter have harbored for years.

That secret, however, is definitely a surprise and will probably not be what the reader expects.

Also included are three bonus stories that show this author’s range and talent. They, more than the novel itself, will leave the reader with a definite case of the shivers. Each story is vastly different from its predecessor, but all are guaranteed to “leave readers haunted,” as the back blurb promises.

Relying on atmosphere and suggestion rather than grimdark, author Darcy Coates offers a display of suspense and encroaching terror in the Folcroft Ghosts. This talented lady has a list of 16 titles to her credit and more to come (we hope.)