The Fog Ladies: In the Soup (A San Francisco Cozy Murder Mystery) 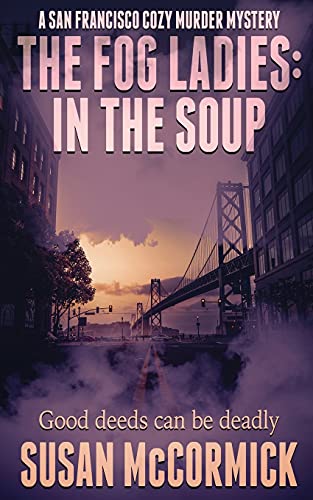 This third installment of the Fog Ladies series has the group embroiled yet in another adventure. The five elderly women living in Pacific Heights, San Francisco, always seem to find themselves right in the middle of murder scenarios, which they love trying to solve, relishing the excitement.

Sarah James, the newest member, interns in the hospital's emergency department, and she cannot wait until her rotation is over. Indoctrinated by the "ladies" when she first moved into the 1920s apartment building, Sarah, overworked and lonely, is under their wings. Offering friendship and meals, Sarah enjoys their company and sharing two sleuthing adventures.

This "investigating" set includes Frances Noonan, Sarah's favorite neighbor who loves to cook and often has Sarah to her apartment to share dinner with her. Ms. Enid Carmichael is divorced, somewhat eccentric, and thrives on gossip. Mrs. Harriet Flynn is slightly dreary, pious, opinionated, and always moralizing about one thing or another. Mrs. Alma Gordon always steps in when needed, whether to care for an infant or adopt a puppy after his owner dies. The fifth member is Mrs. Olivia Honeycutt, who does not live in the same building, doesn't say much yet is close to the others.

The women who play gin rummy, volunteer at the hospital, and keep each other company attained their title from Sarah:

"Mrs. Noonan told Sarah you could count on them like you could count on early morning fog. Every morning Sarah heard the weather report on the radio, and every morning it was the same—early morning fog burning off by midday. Sarah started to think of the group of women as the Fog Ladies. She told this to Mrs. Noonan, who loved the name and promptly told the ladies. From that day on, they were the Fog Ladies."

Also residing in the building is Mr. Glenn, a widower who grieves over his deceased wife yet has a fondness for Alma (Mrs. Gordon) and helps her out whenever necessary. Then there's Andy, a San Francisco Chronicle newspaper photographer who Sarah recently started dating. Having been jilted by a man she thought was the "one," Sarah envisions falling for Andy, but will he do her wrong, too? When they get into an argument, Sarah becomes despondent, both with her love life and work, so they decide to get her out of her funk.

Harriet Flynn discovers a soup kitchen next to her church is seeking help, enlists them to volunteer. "Usually adverse to projects involving unsavory characters or morally questionable types, Mrs. Flynn had turned a corner in her old age and now sought out ways to care for anyone, the more 'downtrodden,' the better."

"Olivia Honeycutt, who uses a walker, is afraid of standing for long periods of time, chopping vegetables, and serving people," states her opinion. But Harriet Flynn is not deterred, saying she'll find roles for all of them.

Though not in their neighborhood, Frances Noonan drives the ladies, so Sarah decides to walk to save from being squeezed in the car. Arriving, they notice the building is dilapidated, graffiti painted over many times, and dirt- and weed-infested lots on either side. William Whitman, a middle-aged man who runs the establishment with Sadie, his helper, welcomes them as the women peruse the facility.

A skinny man wearing a stained overcoat bangs into the room. He grabs some cookies and slammed back out again. William says his name is Cedric, and he's a regular visitor. He explains they are entering The California Big Pot, a new competition for making the most enormous kettle of soup in California. William hopes to win the prize money to replace the stove/oven and complete much-needed renovations. The plan is to make vegetable soup, and he supplies them with lots of ingredients to chop.

While everyone is busily chopping and chatting, Cedric shows up and fixes his attention on the Fog Ladies, which creeps them out. Another bang on the door introduces an additional visitor—this one the opposite of Cedric. This man, short and dark-haired, immaculately dressed in a black silk shirt and black pants, shoes gleaming and expensive, breezes in as if he owns the place. He effusively greets William as "Willie," who appears to be upset by his appearance.

"William turned to the Fog Ladies. 'Everyone, this is Cornelius Cummings, San Francisco chef supreme and restaurateur, owner of William's. And Geraldine's. And Rosemary's."

He explains he is there to see the colossal pot William plans to use, but it hasn't arrived yet. A thin black woman strides in and claims Boris, Cornelius's dog, is needed by Cornelius. William walks them out and returns with a long sigh, leaving the women contemplating the history behind this.

A few days pass, and all are at the soup kitchen busily preparing the ingredients for the contest Animals should not be where food is prepared. Cornelius arrives again, this time with Boris, causing upset. Then Cedric plows in and stops short in front of Cornelius before he yells at him, "You're the one!"

Ears perk up, and the ladies listen to the conversation:

"'Now, do you have something to say?' William gave the angry man his full attention.

"'I heard the soup kitchen's closing for the competition, that there won't be meals tomorrow. I heard it was because of Cornelius Cummings, the big celebrity.' Cedric's words dripped with disdain. He drew himself up to full height and glowered at Cornelius, who did not look the least intimidated.

The talk centers on Cedric's past and how his anger always gets him in trouble. What have the ladies' gotten themselves into? they wonder. This man is scary.

Frances Noonan arrives at the kitchen the next day, finding it empty and stifling. She cannot see anything with a mist swirling around the room, but she brushes against something soft. It is Boris, Cornelius's dog. What is he doing here? Especially when it's so hot? As she edges near the simmering soup, Boris barks, and Mrs. Noonan discovers a shiny black shoe sticking out of the enormous pot. The shoe is attached to a foot that only could belong to Cornelius, showing the man is dead in the boiling concoction. It is somewhat inconceivable to imagine a pot so huge a person would actually fall into it as if it were a pool. Yet the visualization of this adds to the character of the story.

As all hell breaks loose, the police write off the death as an accident. However, after what the women witnessed the day before, they doubt this. It has to be murder. But who did this? They consider Cedric. He seems most likely after showing his hatred toward Cornelius. It may also be the owner of the building who is planning to shut it down permanently.

Aha! Another case to solve and claim this isn't an accident but murder! The sleuthing steps the Fog Ladies take are convoluted, thought-provoking, and chilling. All the characters, including Boris, the canine, have differing impediments as they prove age cannot slow them down. Their love and caring of each other is a testament to this humorous and compelling tale, offering a delightful addition to this cozy series.