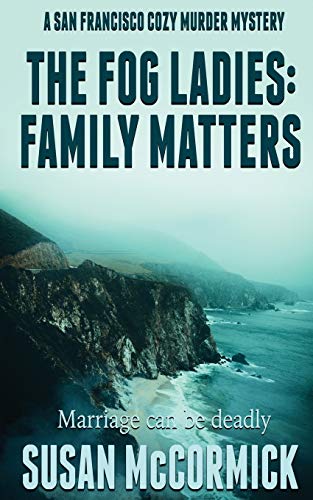 Having completed the last round of her medical internship, 28-year-old Sarah James is relaxing at Paradise Cove in Big Sur, a resort recommended to her by one of her patients. As she sits quietly by the pool reading a novel—a luxury from her long hours of studying and working at the hospital—a young couple with a screaming infant infringes on her solitude. Later, they come into the dining hall where their loud arguing interrupts the other guests’ dinner. Both are drunk, and when their child accidentally knocks over a glass spilling water into his mother's lap, she rushes away from the table in a furious huff. The husband addresses his wife as Andrea and begs Sarah to watch his son so he can catch his spouse.

The youngest resident in the 1920s San Francisco apartment building, Sarah returns home from her too short vacation, happy to see her five elderly female neighbors. The women have formed a group, calling themselves "The Fog Ladies." Their favorite pastime is to solve mysteries. Getting together more than a decade ago after many lost their husbands, they turned to each other for comfort and company. When Sarah moved in, they invited her to join them.

These spunky seniors consist of: 75-year-old Mrs. Frances Noonan, who is recovering from a recent hip replacement and is Sarah's favorite neighbor. Mrs. Noonan loves to cook and share meals with Sarah.

Six-foot-tall Ms. Enid Carmichael is hefty with dyed red hair and is the only divorcee, who once was bitten, now thrives on gossip and excitement. She acts to be an expert on knowing everything about everyone except when it comes to kids.

Small and skinny Mrs. Harriet Flynn is angular with bristly, steel gray hair who wears drab-colored clothing and seldom smiles. Very opinionated and acting holier than thou, she is always preaching about something or other.

Mrs. Alma Gordon, 75, is short and round, with fluffy white hair. After one of the ladies' charity activities, she befriended Chantrelle, a 16 year old who gave birth to baby Owen. They stayed with Alma for a while, then one day dumped the infant off on Alma's doorstep putting her in charge of the child. Though Alma loves the boy dearly, she knows Chantrelle will return for him, which makes her sad. Her most common mannerism is constantly saying, "Oh dear" and devotedly reading her horoscope.

The last of the group is Mrs. Olivia Honeycutt, a low-key person, also a widow with a gravelly voice who needs a walker to get around yet doesn't say much. Though she does not live in building, she is tightly involved with the others.

There are two male residents in the building. Mr. Glenn, a widower, is stooped, bald and wears thick glasses. Once withdrawn and grieving over the loss of his wife, Bessie, he has taken a shine to Alma, and delights in entertaining Owen, becoming more animated and happier when with the child.

Sarah questions Mrs. Noonan as to why they all address each other by Mrs. and/or Mr. and not their first names, she states:

"We were from a different era than you are, dear. Our parents were of definitely of a different era, and they taught us well. This was long before 'Ms.' was popular. Everyone was 'Mrs.' or 'Miss.' It was a form of civility, of respect. The country was in crisis, and we held on to these courtesies, they held us together. We were comfortable speaking this way. In this building, we Fog Ladies, we just kept it up, even now."

Lasty, there is Andy, a red-haired, and green-eyed, younger tenant who is a newspaper photographer. Recently he and Sarah became attracted to each other, and she wonders if anything will come of it.

When Sarah gathers with the women after her vacation, Mrs. Noonan shows them a news article about a woman named Andrea Blackwell, who had been stabbed by her husband, Paul. Glancing at the paper, Sarah recognizes their picture as the arguing couple at the resort. The headline states Paul is in custody for the murder and their child Ben is currently with his grandmother, Julia Bentley Blackwell. Sarah explains how Paul appeared to love his wife (even though they were fighting) and his son and cannot picture him harming her.

Mrs. Noonan once volunteered with Julia during the summer when they were young, dealing with juvenile offenders. She contacts Julia hoping she and the Fog Ladies can offer any assistance to her and her grandson. It appears the motive for Andrea's death was a million-dollar life insurance policy, though Julia is adamant Paul did not kill Andrea.

Sarah's affinity for the residents grows and through their investigating they learn another murder occurred by a couple who had been at Paradise Cove, though in that case, these guests lived in Pennsylvania, and it is alleged the wife murdered her spouse to gain his million-dollar insurance policy.

With several contacts in the media and law enforcement, Mrs. Noonan asks Andy if he can gain information about the Pennsylvania case. He manages to learn of another murder where a Chicago woman named Serena Evans killed her husband for his life insurance, and they also had visited Paradise Cove. Is it a coincidence that these defendants committed murder for the hefty policies and were also guests at Paradise Cove? Even more interesting is that they all were represented by attorney Spencer Tremaine.

Andy discovers Serena recently was granted a transfer to the Central California Women's Facility, so she could see her daughters who now lived with her brother nearby. Putting their heads together, the ladies ingratiate themselves with the prison warden suggesting that by holding a quilting group, they will help the inmates and accomplish a worthwhile deed. While there, Mrs. Noonan is able to talk privately to Serena and finds a lot of similarities between the cases. Now, How to prove they all have been set up?

Book #2 in the Fog Ladies series is a character-driven novel offering many different subplots and the suspense of putting the puzzle pieces together, making this is a thriller that is sure to whet the appetite of cozy aficionados.