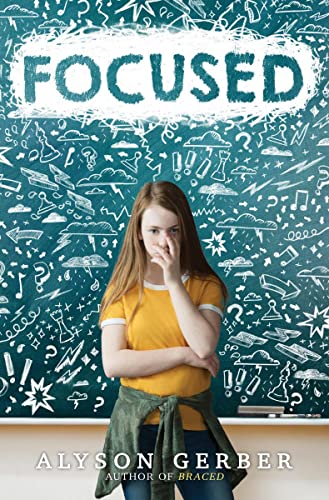 Clea plans to finish her homework in a couple of hours. She looks at her math book but can’t understand the directions. "I sit up and read the first word problem: Three friends—Jane, Jon, and Joe—are dividing up the proceeds from their local lemonade stand . . . My stomach grumbles . . . Maybe I should shower, eat, and then do my homework." That takes the first hour. Then she takes out her Spanish homework. Her phone begins to buzz. Where has she put it? She looks under the bed, in her knapsack and on her night table. Red, her best friend, is going to think she is ignoring him. Her mother is now calling her for supper. No matter how hard she tries, she still gets failing marks on her tests. She assumes she is stupid. feels felt that the other kids are making fun of her. She is a loser.

Chess. That's what she excels at. She is able to plan her moves and even trick her opponents. She is a winner. She is able to concentrate on playing chess and looked forward to Mr. Lee's class. She doesn’t get distracted as she does when doing homework or class assignments. But her concentration wavers when kids are coughing, banging their knuckles or chewing gum. She also knows that if she gets failing grades, she will be kicked out of her chess team. She isn’t trying hard enough. She just has to focus.

Clea's parents also think that she isn’t trying hard enough. They assume that chess is interfering with her schoolwork. " I saw you practicing chess problems last night, so I thought that was maybe why you didn't finish your math." But Clea is not going to give up her favorite activity. She would try harder. But every time she starts her homework, Red, her best friend texts her and she has to answer him. Or her younger sister, Henley, whom she loves to pieces, wants to play a game. She hates refusing Henley because her sister is sensitive about her speech problem.

She plans to wake up at 6:00 a.m. to finish her essay. The alarm goes off at 8:30 and she is late for school. Her mother is angry. "‘I'm sorry,’ I say, "because it's not her fault that I need to do everything better." Clea is excited about this essay which was on The Outsiders by her favorite author, S. E. Hinton. She asks Mr. Lee, her English teacher, if she can present first. "When I get to the end, I know I did a great job making my oral biography informative and relatable." When she finishes, Quin picks up her hand and states: "But we're not reading her book in class, so you did it wrong." Clea wishes she could melt into her chair like a stick of butter. Mr Lee tells her that although her presentation is good, he's giving her an F because she didn't follow the directions. "No. This isn't happening. I can't fail." Mr. Lee then gives her another chance to choose an author on the list and present on Friday.

Then comes the Spanish test in class. She looks at the questions. Everyone else is writing vigorously but "my brain got stuck on question one. I sat here being mad at myself. It's like out of nowhere the time disappeared on me. And I'm not sure where it went." She hands in a blank sheet. She is late for chess but wins the games.

Clea knows that she shouldn't lash out at others but can't help it. The other kids begin to notice. But Sanam is always there for her. A real friend. Red would come over every Friday to watch movies and eat popcorn. Dylan is also Red's friend. One Friday, Red tells Clea that he is sleeping over at Dylan's house. Clea feels left out and jealous that Red prefers to spend time with Dylan than with her. Red is upset that, since his father left them for another woman, he hardly speaks to him. Clea gives him a sympathetic ear.

One day Red starts crying on her shoulder. His father and new wife are having a baby. Red feels that he'll now be neglected entirely. Clea goes to his house to comfort him. She's able to show real empathy and Red feels better. At home, her mother praises her for dropping everything to help a friend.

At dinner, her parents tell her that her teachers phoned to tell them that she is getting failing grades. They want her evaluated for attention-deficit/hyperactivity disorder, a.k.a. ADHD. If the results are positive, her teachers will make a plan so that she can focus better. Clea refuses to believe it. Ms Curtis will sit in on all her classes and observe her behavior. She will have to miss three days of school for the evaluation by Dr. Gold, a psychologist.

In class, Clea feels self-conscious when she sees Ms. Curtis at the back of the room taking notes. The other kids begin to wonder whom she's observing. Finally, she gets an appointment with Dr. Gold, the psychologist. Clea tells Dr. Gold that she doesn't have ADHD because she focuses very well on her chess games. "I'm like a focus machine." She's failing in school because she's dumb and lazy. She's then evaluated for ADHD.

Clea can't believe that the tests show that, although she is diagnosed with ADHD, she's highly intelligent. Dr. Gold explains that ADHD means that not everyone with this condition is hyperactive. "ADHD doesn't mean you can't focus. It means you have a hard time shifting, maintaining, and controlling attention and emotion, because the part of your brain that handles self-regulation is wired differently. Sometimes your gears get stuck . . . or out of control." But ADHD also has good qualities, for example, perseverance, even in the face of failure. That's the reason that Clea can focus on chess. Dr. Gold tells Clea that "smart, capable people come in all different packages."

Dr. Gold suggests that she take medication and that the teachers will develop a plan to help her focus better in class and on her homework. Clea balks at taking medication but decides to try it. The medication makes her feel nauseated and queasy at first. At school, Red is late for chess. The other kids are angry. Clea blurts out his problems with his father having a baby with his new wife. Red is so embarrassed that he refuses to talk to her for the next few weeks, even though she apologizes. "It makes me think that Red is right and I can't change. And I'm afraid that no matter what I do or how hard I try I can't be a better friend to him or anyone and that school is always going to be like this for me."

Clea has to learn to ask for help from her teachers. For example, she may need extra time to finish the tests and write them in a quiet room. She gets full cooperation. When she tells Sanam that she has ADHD, Sanam reveals that she has been struggling with dyslexia for several years. She sees the letters backward and they seem to be jumping all over the page. She has a tutor to help with this condition.

When Clea loses three chess games in a row in a tournament with other schools, she's devastated. She can't help thinking about Red. She becomes distracted with every small noise in the room, such as chewing gum or cracking knuckles. But her parents praise her for playing a good game and persevering. After all, Clea is known as one of the best players in the school. Mr. Lee tells her that losing will make her a better player.

According to Edward M. Hallowell, in his book, Driven to Distraction, "Millions of children and adults tell themselves or are admonished by others that they will continue to have problems in school, work and social relationships if they don't stop procrastinating . . ." But they are actually suffering from an inborn neurological problem, called ADHD.

The author, Alyson Gerber, who has ADHD, wanted to write this book for young adults to give them a better understanding of this condition. She was diagnosed when she was 21 years old. Although she worked harder and harder, she was failing in school. "I wrote this book because ADHD is complicated and challenging, not just for the person with ADHD, but for their family and friends too."

The reader will enjoy the twists and turns in the rest of the book, which offers a full understanding of ADHD. Written in the first person, it rings like a true story. Clea Adams represents everyone who has this condition. However, it would have been better if the author had explained the game of chess more clearly. This work belongs on the shelves of all public libraries. A must for young adults and their families.