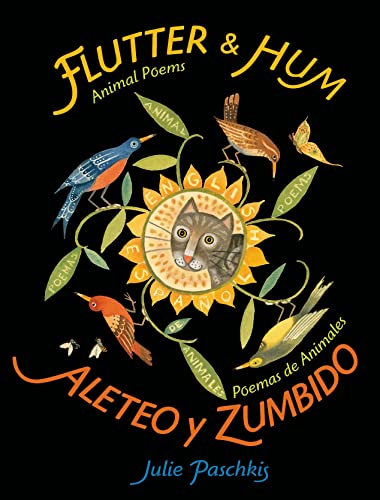 “energetic interplay of art and poetry . . .”

Paschkis’s collection of 12 brief poems, complemented with vivid double-spread illustrations rendered in gouache, glimmers with surprising suppleness. In “Snake,” or “La Serpiente,” the 11-line poem secretes numerous “s” sounds, and her grassy images of twisting tendrils slip in words such as swerve, subtle, shy, and swallow.

On the opposing facing page, she highlights such alliterative Spanish words as sombra (shadow), sabia (he/she knows), sorpresa (surprise), and solo. As most of these do not appear in either the English or Spanish poem, they act as extended riffs on the child-pleasing poems.

For her playful poem “Turtle/La Tortuga” Paschkis focuses on the shell as a secret vault of enchantment: “The turtle hides/in her shell./But maybe there is space,/a place/for hidden treasure.” Embedded in the hard shell are drawings of gems, locks, and keys, while copious pointy teeth embellish the shell’s border.

On the English half of the two-page illustration, the shell reveals such words as glow, inside, glisten, while the right-hand side gives us the Spanish gema (gem), adentro (inside), and lustra (he/she polishes). Unhurried, curious readers will relish the correlation between the Spanish words and various related English words.

In her author’s note, Paschkis reveals the singular inspiration of her poetry. While illustrating Pablo Neruda: Poet of the People, a picture-book biography written by Monica Brown (2011), she fell in love with Spanish and immersed herself in the Chilean poet’s work. That led her to create her own poems, first in Spanish and then in English. Some poems, she noted, “are not translated word-for-word; instead I used the phrase that worked best in each language to convey the same meaning.”